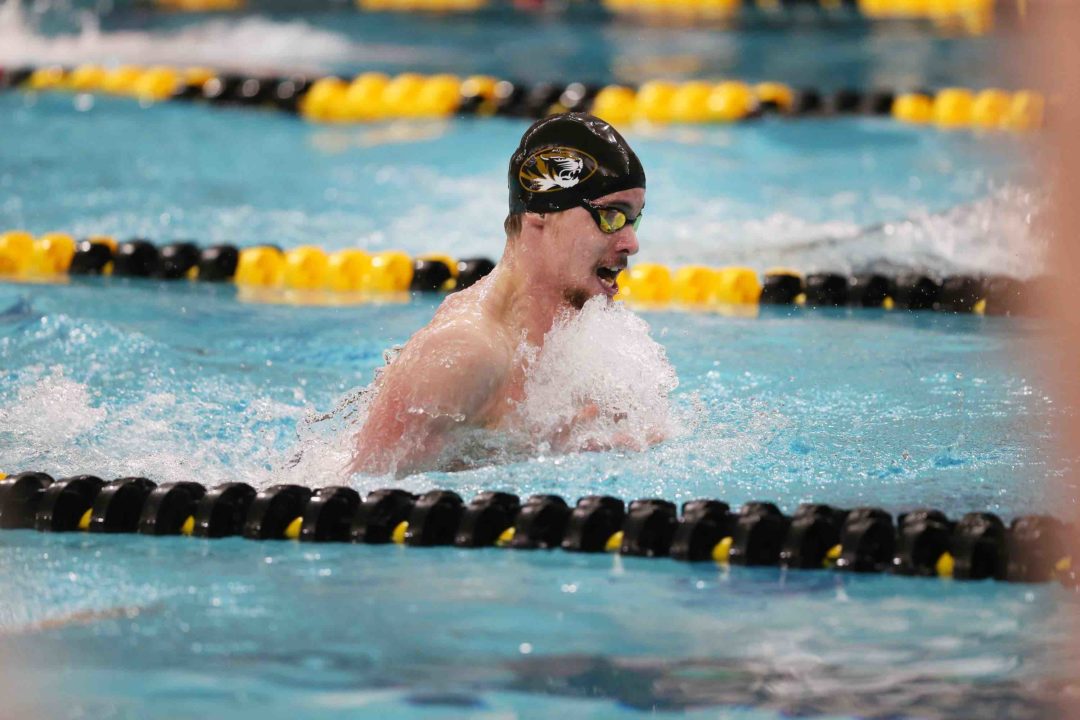 The Missouri men produced a 3:06.35 in the 400 medley relay, among the fastest times in the country this season, on day 2 of the Mizzou Invite. Current photo via Mizzou Athletics

Ohio State’s Amy Fulmer won two events on night two in Indy as the Big Ten women from Indiana, Ohio State, and Michigan combined to win all of the events.

Missouri won all but 2 races on night two the the 2020 Mizzou Invite in Columbia. Despite this, depth on the women’s side for both Kentucky and Arkansas has kept Missouri in check and assured a tough battle for the Tigers for the next two days, though the Missouri men seem the heavy favorite to win their meet.

Racing in their home pool, the Tigers kicked things off with victories in both the women’s and men’s 200 freestyle relays. The Missouri women just missed the NCAA ‘A’ cut in the relay, posting a 1:28.59, though they came in comfortably under the provisional time. The team from Arkansas placed 2nd in 1:29.77, about half a second shy of the provisional cut for NCAAs. Kentucky’s ‘A’ team, meanwhile, placed 3rd in 1:31.52.

On the men’s side only three teams competed, two from Mizzou and one from Kentucky. Here, Mizzou again took 1st and 2nd, though neither team achieved an NCAA time. The ‘A’ team, however, was extremely close to the NCAA ‘B’ time with their 1:17.88, falling shy by just 2/100ths.

Kentucky’s Beth McNeese got the Wildcats their only victory of the night by taking the 500 in 4:40.69, beating out top-seed Peyton Palsha who finished in 4:51.53. Both swimmers were a couple seconds off their best times in the 500, but both also far under the ‘B’ cut time. Kaitlynn Wheeler (Kentucky), Allison Bloebaum (Mizzou), and Ana Pozder (Mizzou) all also achieved NCAA ‘B’ cuts, finishing in 4:46.21, 4:46.62, and 4:46.70, respectively. For Bloebaum, the swim tonight comes as a 1.29 second improvement on her previous lifetime best, and for Pozder a o.07 improvement on her lifetime best.

Missouri’s Katrina Brathwaite held on for the win in the women’s 200 IM, posting a 1:57.75 to shave more than a second from her prelims time which was itself her first time under 2:00 in the race, but the field was very Kentucky-laden with places 3, 4, and 5 all going to Wildcat swimmers, and each earning an NCAA ‘B’ cut. Additionally, Kentucky’s Bailey Bonnett, swimming in the ‘B’ final achieved a ‘B’ cut with a 1:59.75 to win her heat by nearly 2 seconds. Arkansas’s Adela Vavrinova placed 2nd in 1:58.10, her second lifetime best in this race today.

Danny Kovac was more than a second slower tonight than in prelims in the 200 IM, but he still won by nearly a second with a 1:43.91. Sophomore Ben Patton placed 2nd, also slightly slower than his prelims swim but still his 2nd-fastest performance ever, in 1:44.62. Though slower than his morning swim, Patton is now ranked 5th overall in the Mizzou rankings in the 200 IM. Kovac was out fast on the fly, turning in 21.58, but the next three legs of the race he and Patton had nearly identical splits, going 26.17 and 26.29 on backstroke, 30.58 and 30.51 on breaststroke, and then 25.58 for both men on the freestyle.

Kovac and Patton would later swim on the 400 medley relay together where Kovac would split a 45.48 on the fly and Patton a 51.83 on the breast, each split coming in as the fastest by a significant margin in its respective discipline. Jack Dahlgren led off the relay in 46.56 while Kyle Leach anchored in 42.48, making for a total time of 3:06.35, the 10th-fastest time in program history, and the 5th-fastest 100 backstroke in program history for Dahlgren.

Though they were both slightly faster in prelims, Missouri’s Sarah Thompson and Megan Keil again placed 1-2 in the finals of the 50 free, hitting the wall in 21.84 and 21.91, respectively. Andrea Sansores from Arkansas placed 3rd in 22.74, also achieving an NCAA ‘B’ cut and improving her lifetime best by 11/100ths.

The men’s 50 free saw 4 men break 20, though Caleb Hicks, swimming unattached for Mizzou, placed 1st in 19.90, just ahead of Alex Moore and Kyle Leach who tied for 2nd in 19.96, the exact time that Leach went in morning prelims. Top-seed Kevin Hammer faded to 4th but only added 0.06 to his prelims time, posting a 19.99.

The Arkansas ‘A’ team captured the women’s 400 medley relay in 3:34.49, winning by nearly a second though missing the NCAA provisional time standard. Led off by Sansores in a 52.90, the Arkansas women were 2nd behind Kentucky at 100 yards thanks to Caitlin Brooks‘ 52.51 lead-off leg for the Wildcats. Vanessa Herrmann produced a game-changing 59.86 on the breaststroke to bring Arkansas into the lead by 150, and then extend it to over a second at 200. Izzy Gati made up some ground on Vavrinova who swam fly for Arkansas, but Kobie Melton‘s anchor leg of 47.93 was too much for Kentucky, though Riley Gaines produced a 48.15 for the second-fastest split in the field.