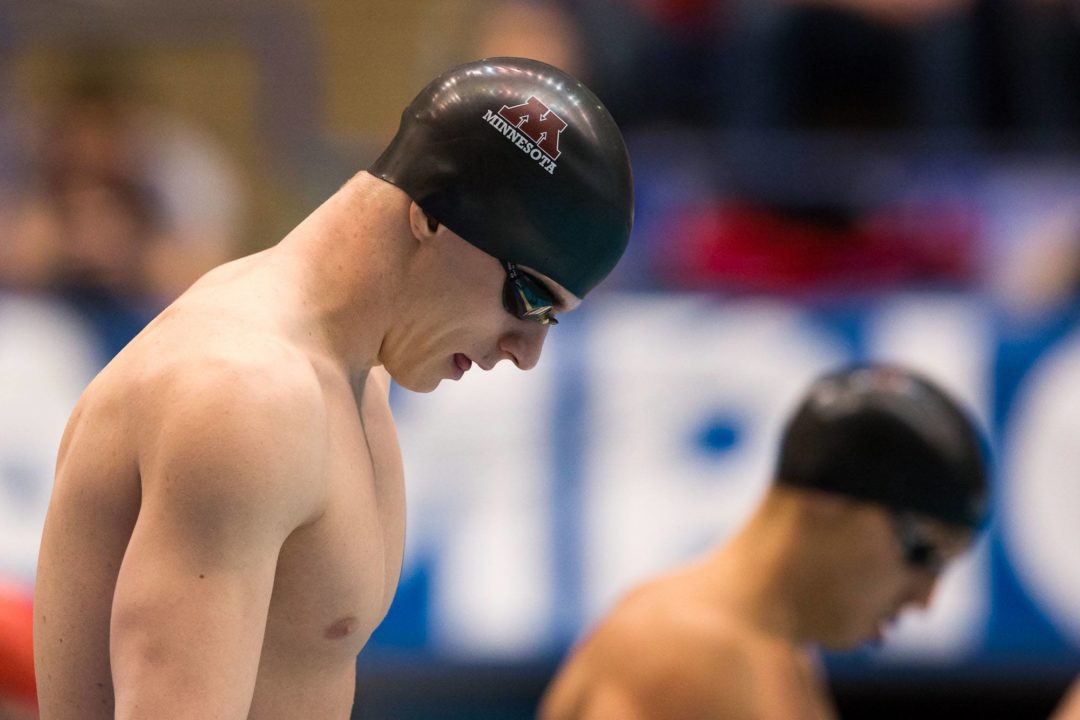 Minnesota and Wisconsin renewed their Big Ten rivalry with a long course dual meet to kick off summer season, with the Golden Gophers picking up a pair of wins.

For many college programs, when the NCAA Championships wrap up, school rivalries and team scores take a backseat to individual performances and summer championship meets.

But for two Big Ten schools, the team rivalry lives on, as Minnesota and Wisconsin elected to save their last official dual meet of college season for May 2nd and 3rd, as a kickoff to summer season.

The two teams competed in a two-day, long course dual meet at the University of Minnesota Aquatic Center, complete with running team scores, an event Minnesota coach Kelly Kremer says will likely become a running tradition for the two programs as a way to open up long course competition season.

On Saturday night it was the home team that emerged triumphant in both genders, with the Gopher women wining 206-123 and the Gopher men taking the meet 185-153.

Wisconsin countered that impressive resume with their own stud, sprinter Ivy Martin. Martin took advantage of the added sprint events to claim four wins over the two days. The junior was impressive as always in the freestyle races, going 25.83 to win the 50 and 56.83 to run away with the 100.

Maybe more impressive was Martin’s improving butterfly. She bested Minnesota’s former Big Ten Champion butterflyer Becca Weiland in both sprint distances: Martin was 27.20 to Weiland’s 27.82 in the 50 and 1:00.84 to Weiland’s 1:01.56 in the 100.

The final Minnesota winner was freshman Katelyn Holmquist in the 200 back. She went 2:21.43 to beat Wisconsin’s Aja Van Hout.

Outside of Ivy Martin, Wisconsin was only able to pick up one more individual win. Dana Grindall went 2:16.78 to win the 200 fly handily.

Minnesota took both the relays as well. Tess Behrens, Smith, Weiland and Lauren Votava combined to go 4:12.80 for the 400 medley relay win, and Votava, Weiland, Blake Zeiger and Simenec won the 400 free relay with a 3:50.40.

The only Gopher to beat Caldwell in an individual race was freshman Jakub Maly. The Austrian sensation swept the IM races after putting up a pair of top-3 finishes at the Mesa Grand Prix a week ago. Maly went 4:32.32 to top Caldwell in the 400 IM and also touched out teammate Andrew Hartbarger for the 200 IM win 2:07.12 to 2:07.53.

Minnesota’s biggest point contributor was fellow freshman Daryl Turner, who put up three wins and a narrow second. Turner opened up his meet by topping senior teammate Kyler Van Swol for the 50 butterfly in 24.65 (Van Swol was 24.86). Turner then came back to take the 100 fly as well, going 56.18.

Graduating senior Derek Toomey won both sprint free races for the Gophers. The All-American sprinter blasted a 22.68 to win the 50 (with Turner second), then returned to go 51.26 to narrowly beat out teammate Van Swol for the 100 win.

It’s also worth noting that a couple of well-known post-grads put up some solid times swimming exhibition. World Champs silver medalist David Plummer, a Minnesota alum who trains with the University’s professional group, went 25.39 in a 50 backstroke, and followed that up with a 54.93 in the 100 back.