Minnesota Continues To Mine Midwest With Verbal From Wisconsin IMer Krupsky 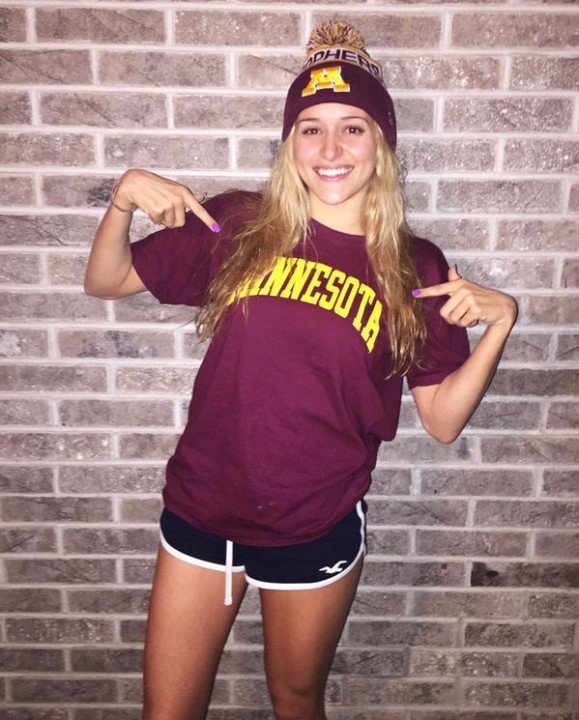 Krupsky heads across the border to Minnesota from the well-regarded Schroeder YMCA swim team in Brown Deer, Wisconsin. She has also swam for Ozaukee Aquatics, another well-known Wisconsin program.

A great butterflyer through both NCAA distances, Krupsky could easily be considered a butterflyer who also happens to swim IM, were it not for her 4:19 400 IM, which is probably her most impressive time coming out of high school.

That time would have vaulted her into the Big Ten’s C final last year – that wouldn’t have scored points in 2015, but with the Big Ten expanding their scoring system out to 24 this season, Krupsky becomes a potential immediate scorer in the longer IM.

Minnesota is currently holding a 4-year stranglehold on the Big Ten title, thanks in large part to their outstanding recruiting in Minnesota and its neighboring states. The team’s school record-holder in the butterfly also came from a Wisconsin YMCA – recently-graduated All-American Becca Weiland.

Krupsky joins a very strong recruiting class for the Golden Gophers that is also based out of the midwest. The centerpiece is Minnesota prospect (and #10 recruit nation-wide) Lindsey Horejsi, and the class also includes South Dakota’s Tevyn Waddell, Minnesota state champ Madison Preiss and now Wisconsin’s Krupsky.

Congratulations to Rina and the to the Gophers! BIG10 all the way!

Hey guys and girls slow down. What does it matter who does what. All coach’s have their own style of coaching and all swimmers react differently to different type of coaching. Who is right or wrong is a matter of opinion. Let’s just hope for the best for Rina and wish her success in College.

IN CASE WE FORGOT, IT’S ALL ABOUT THE SWIMMER!

I think I need a hug!

Rina swam under Robert White at the Schroeder YMCA program for the last 2 1/2 years. I’ve talked to him on deck and White doesn’t believe in two a day practices or any weight training at all for high school aged kids. I looked at her progression and Rina’s times have consistently come down season after season! Imagine how much faster she will get with the additional training and conditioning from a college program! She looks to be only two seconds over the Olympic trials cut in that 400 IM. I think the Gophers just grabbed a future gold mine. Congrats to all!

white doesn’t do 2 a days? you don’t know what you’re talking about. And he pounds the yardage every day, most days are close to 10,000 yds. that’s a lot of wear and tear on kids. It’s all garbage. Swimmers under him have gone back to Dave Anderson to have their strokes completely reconstructed. This guy got fired from his last three gigs, most recently Schroeder just 2 months ago. Ask Delaware or SWAT what they think of this guy. Krupsky got a good college in spite of him, most of his seniors don’t do so well… and her height is going to cap her upside. But regardless, good job, Rina!!

Swimswam-Swimswam- You don’t have a clue what you’re talking about. My son swims for Schroeder and Bob White does not do two a day practices. The reason kids are flocking to Dave Anderson is because they fired Bob White and replaced him with two kid coaches who have no experience and don’t know what they are doing.

Also, they are moving to a RPT plan and it isn’t going to work for kids who swim mid-distance and distance events. We know the Krupsky family and Rina got offers to swim at other Big10 schools.

This kid has cut time every season since she started swimming with Bob White. And you’re arrogant if you think her height is going to cap… Read more »

To the commenter now named as anonymous – please do not leave comments implying that you are affiliated with SwimSwam. Your comments are your own, and are not something that SwimSwam is responsible for the content of.

Congratulation Rina, you have worked hard for years, and have the results to show it!

I agree with the other south dad, don’t listen to the crap about size, we all know there’s much more to speed than just height.

I could go into a big rant on training philosophies and what happened to south, oh yes I know the details, but this is about Rina, congratulations again, you made a great choice, and will be very happy at Minnesota!

Great additional to a top Big 10 team! I’ve watched her swim for years at Speedo meets and she’s not only a great athlete, but everyone on deck loves her.