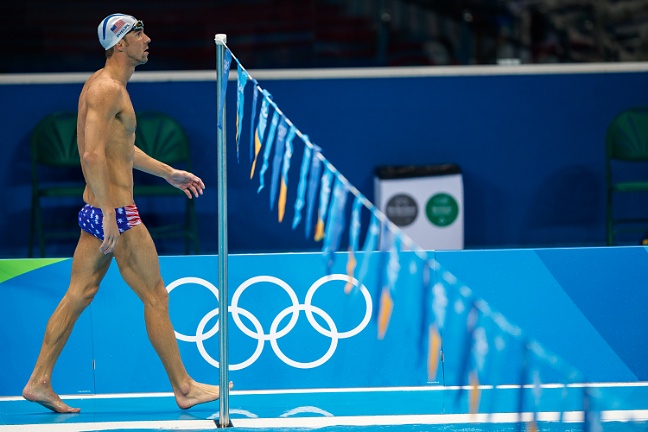 Michael Phelps, who announced yesterday that he will be bearing the U.S. Olympic flag in the opening ceremonies tonight, will... Current photo via Rio2016

Michael Phelps, who announced yesterday that he will be bearing the U.S. Olympic flag in the opening ceremonies tonight, will be bowing out of the Olympic opening ceremony early tonight.

USA Today is reporting that after bringing his flag into Maracana Stadium, Phelps will be driven back to the Olympic Village by NBC staffers. Most other flag bearers will stay for the duration of the ceremony.

The decision of high-profile athletes to leave the ceremonies early is not completely unprecedented.

At the 2016 US Olympic Trials last month, Phelps narrowed his focus to only his three best events: the 100 and 200 butterflies and the 200 IM.  Phelps was victorious in all three events, and will swim each of them in the 2016 Olympic Games in Rio de Janeiro, Brazil. Besides his spot on the medley relay, he is also being considered for the American free relays as well.

I bowed out early as well. After the US came out, that was it for me. Thank goodness they were with the E’s and not the U’s, would have been an extra 2 hours.

Without a doubt the greatest athlete ever. A great representative for the USA

I am certain US committee knew he would not be staying for entire ceremony before he accepted. If these are the terms they agreed to, then don’t punish the athlete in the press over it. He has an expected outcome and performance and if he stayed up late on his feet and it jeopardized his results in the pool everyone would be criticizing him for that. If it was a security issue, he would not be able to say because they would want to put a brave front on for the games, attendance, etc. He’s the athlete and he needs to do what works for him and his day/days in the pool

I am worried about Phelps.

He has never done opening ceremony before.

Stupid decision by USOC to send him to be the flag bearer.

He must be very tired.

This is so unfair.

Better give golds to Le Clos, Cseh and Lochte already.

I think I may be over-reacting, but it’s normal for a fan to be so worried, no?

He needed to do this. Enjoyed the great atmosphere,but he has more important things ahead

He’s there to swim. It’s been his sole focus for the majority of his life. He needs to do what’s right for him to perform his best. Non athletes wouldn’t have a clue nor understand.

I couldn’t even imagine trying to fall asleep after attending opening ceremonies. Go to bed Michael.

I think the premise was probably primarily to get him off his feet. Prelims don’t start until 1PM, so getting to bed early isn’t really much of a concern.

He doesn’t swim tomorrow so tomorrow’s pre Lims don’t matter much to him. It’s Sunday nights potential final for the 4 X 100 relay is what his first race might be