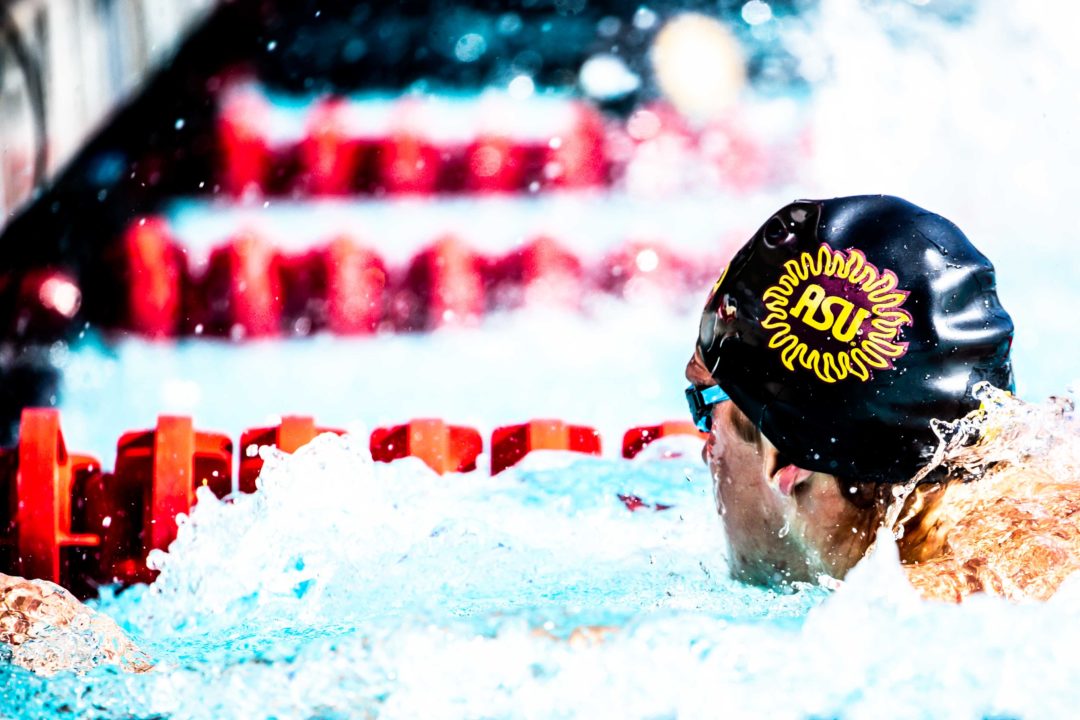 The Arizona State men wowed everyone over the weekend, emerging as the top-scoring team in a hypothetical meet from the first round of invitationals. Archive photo via Jack Spitser/Spitser Photography

We’re at one of the most exciting times of the college swim season — the mid-season invites. For many teams, this is the first chance they’ve really had to swim suited up and (maybe) tapered and (maybe) shaved, although swim fans love to debate how rested and shaved their favorite teams actually were.

With at least five big invite meets this past weekend, plus plenty of smaller ones, there were plenty of big swims. But with likely top-10 teams swimming at different sites, and with different scoring formats at each invite, it can get a little tough to quantify just how well each school was swimming.

To help frame the discussion objectively, we used the SWIMS database to compile the top 16 times in each event from this weekend’s action, then scored out the hypothetical meet using the standard championship points structure.

Keep in mind that we compiled these rankings using only swims from this past weekend. This means there are a few big caveats here:

All that being said, to the best of our ability, here’s how the men’s scores would look if you took all of the swims from this weekend and pretended they were all part of one meet.

While we only had Arizona State at #14 in our latest round of power rankings, the Sun Devil men dominated the weekend. Leon Marchand was the biggest name, as the French native had a stupendous performance in his first taper meet in yards. Not only did he swim to one of the fastest times ever in the 400 IM (3:35.62), he also put up the weekend-leading time in the 200 IM (1:40.80) and the 3rd-fastest time in the 200 fly (1:40.86).

The Sun Devil relays delivered this weekend as well, topping the weekend’s rankings in all three free relays (1:16.60. 2:47.43, 6:10.86). That 400 free relay time was over a second faster than any other team this weekend, while that 800 free relay time was three seconds faster than any other school’s time. Right now, it seems like there could be 13 or 14 teams who have the firepower to make the top 10 at NCAAs, and ASU appears to be moving its way up that pack.

Swimming at the Georgia Tech Invite, the Florida Gators got weekend-leading times from their two US Olympians, Kieran Smith and Bobby Finke. Smith had the weekend’s fastest time in the 500 free (4:10.72), and Finke did so in the 1650 (14:27.70), Each man is the U.S. Open record-holder in their respective event. The Gators also got a #2 performance from Alfonso Mestre, as well as a pair of top three times in two relays.

Indiana finished another 30 points behind NC State in our hypothetical computations. The Hoosiers had one weekend-leading performance, courtesy of Brendan Burns in the 200 back (1:40.27), as well as several strong relay performances, including #2 times in the 200 free and 400 medley relays.

Other top times from the weekend:

C’mon, man! Where is the full compilation? Even if your plan is to wait until you can include the Cal, Texas and Michigan meets in a list, there are those of us out here that would slobber all over a current list … and then again when you add the CTM troika next week. Help us out here. We need a fix. Now, man. (LOL … but really, give us the current list. Please. WE PROMISE WE WON’T TAKE IT AS NCAA PREDICTIONS. PROMISE.

Just checking the SWIMS database and it seems like there is something wrong with the upload from the Georgia Tech Invitational.

There may be other times missing from GT’s meet file. Perhaps SwimSwam (Robert) can look into that.

Rechecking the SWIMS right now, Mert Kilavuz (freshman) from Georgia Tech is in the NCAA database for meets earlier in the year, but his times from last weekend are not in the database.

I didn’t follow the Georgia Tech Invite closely and I’ve been wondering if there are other problems with the meet file from the GT invite.”Problem” might not be the right word, there might be an easy explanation.

I think maybe question 2 answers question 1, in part at least.

I’m curious to see if Trenton Julian drops the 200 free for the 100 fly this season, after his Trials swim. I think he could be 43.

Albiero is the other obvious candidate.

I can see that easily for top 8, huge order to need a sub 45 for top 16 this year though

In the fly 9 guys in NCAA right now have a best time in the 44s. 6 other guys within a half second last year. 4 freshmen that maybe have a shot (Hayes, Samuels, maybe Connery and Groumi depending what they swim, they’re both also great 200 fr’ers). Of course somebody always comes out of nowhere too.

Backstroke is a little more questionable I think. For the newbies, Aikins and Grimm might have that ability. 8 guys return with 44s from last year, 3 more have been 44 in prior season. 4 within half a second.

I think you are on with Julian dropping the 2 free for the 1 fly.
Do you see Alberio or Burns doing the 2 fly 2 back double?

Interesting idea for Albiero. Hypothetically he could improve his 50 fly split (20.07 last year) on the 200 Medley by dropping an event on Saturday.

Louisville was 3rd in the 400 FR last year and Albiero had the slowest split with a 42.09. Albiero could swim the 200 double and Louisville could put someone else on the relay (Sartori? Dubinin? Lektov?).

Could Albiero do better than 5th in the 200 back? Maybe, but he might might push Whyte back by a point (or more if he pushes Whyte into the B final). Can Albiero win the 200 fly again? Maybe, but it sure doesn’t make it easier.

Interesting, but I don’t think Louisville will go that direction. Hoffer… Read more »

Diving included in these scores?

Nah but we did include a US News ranking multiplier.