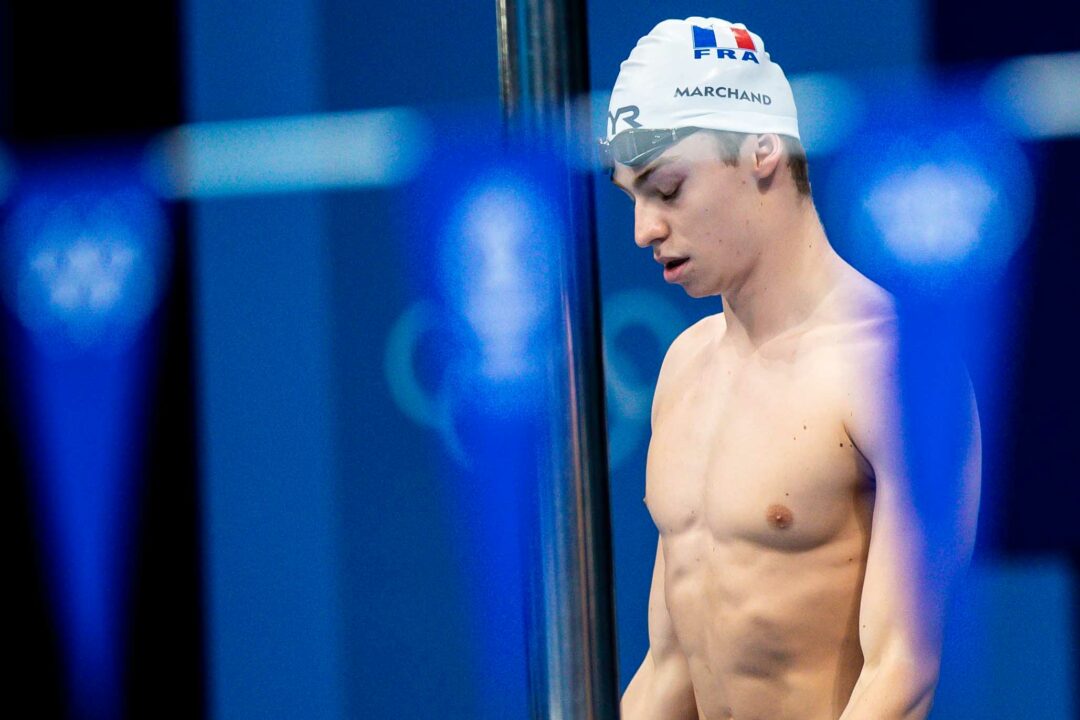 Arizona State freshman Leon Marchand won the 400 IM on Friday at the Wolfpack Invitational in North Carolina. His was the second-best ever time by a freshman. Archive photo via Jack Spitser/Spitser Photography

19-year old Arizona State freshman Leon Marchand won the 400 IM on Friday evening at the NC State Fall Invitational in Greensboro, North Carolina. his time of 3:35.62 is the 5th-best time in NCAA or USA Swimming history, and the second-fastest time ever by a freshman.

What’s more, he did so in his second ever 400 IM race in yards, with his first coming in prelims on Friday morning.

By performers, Marchand now ranks 4th both in NCAA history and all-time.

The splits comparison shows how balanced Marchand is in his 400 IM. If he had to choose a stroke specialty, it would be breaststroke or butterfly, but he’s really a ‘true’ IM’er in the sense that he’s just very good at all 4 strokes and very good at putting them together into a complete race.

Marchand is in his first few months of training and competing in yards and under Arizona State head coach Bob Bowman – most famous for his work as the head coach of the 400 IM World Record holder Michael Phelps.

Marchand isn’t the only new addition to Arizona State’s IM group this season either: former Arizona Wildcat David Schlicht joined the team this season. He finished 2nd on Thursday in 3:40.60. He was 4th in the 400 IM in a 3:39.89 last season. Arizona State’s Jarod Arroyo, who was a Tokyo 2020 Puerto Rican Olympian, finished 4th in 3:45.89. That’s just .08 seconds slower than his lifetime best from March.

Marchand 3.30 at NCAAs , our local boy is kicking some american ass !!

With all of Foster, Merchand, Borodin and Smith on fire this season, it’s likely we will see a new 400 IM World Champion very soon. The last time the World championships winner was not named Seto or Kalisz was 2011.

Just not next year

Seto gonna have that u of m speed

him carson and bobby gonna make it interesting at ncaa

Hugo has also been 3:35 albeit a few years ago.

Hugo likes the B final

You’re a hater! Hugo will redeem himself this coming March just you wait!

The 400 IM is the funnest event to watch!

Can’t wait for him to beat Carson at NCAAs.

And he’s not even shaved 👀

Incredible! Also finke coming home 49.4 in a 4 im is hilarious

If anyone’s going to do it though, Finke is probably the guy.