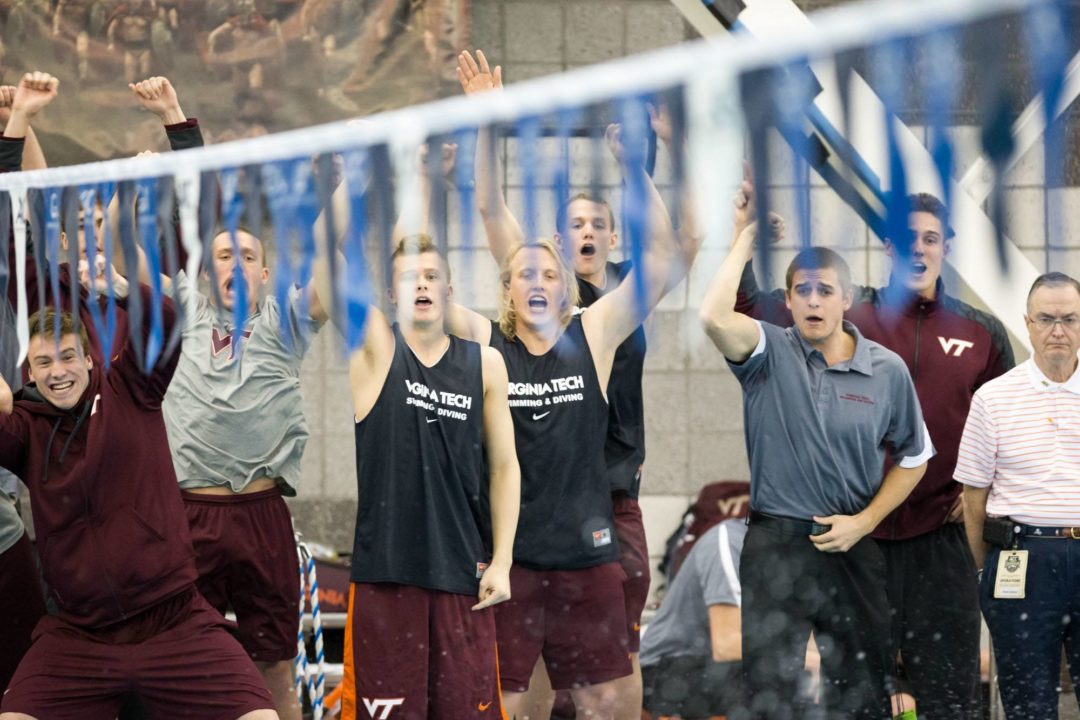 Virginia Tech looks today to distance themselves in the team standings, as they sit first over NC State. Current photo via Tim Binning/TheSwimPictures.com

As of last night, Virginia Tech had the lead of 545 points, followed by NC State at 433, and Virginia and Florida State very close together at 402 and 400 points. The scoring includes two diving events, and are technically unofficial. That being said, this meet is shaking out to be very close in the team race.

The morning the 400 IM, 100 butterfly, 200 freestyle, 100 breaststroke and 100 backstroke were contested. Finals will be tonight, in addition to the 400 medley relay. We have done an analysis of the Up/Mid/Downs for tonight here.

The field dropped a lot of time from their seeds this morning, to create a very diverse field for tonights A final. Virginia’s David Ingraham swam to an A time this morning of 3:42.94.

Florida State’s Connor Knight leads the pack tonight with a time of 45.83 – also under the A standard. He is very close to the ACC Meet & Conference record set in 2010 by Tommy Wyher of 45.57.

His teammate Pavel Sankovich is third, 46.44.

Virginia Tech rounds out the top eight with Morgan Latimer and Nick Temols at sixth and eight, 46.55 and 46.87.

Virginia is without an A finalist tonight. The incoming second seed Parker Camp ‘false started’ in his race this morning, resulting in a disqualification. His time would have been around a 1:35-mid, and would have just got him into the A finals for scoring.

Two more Irish are also in the A final. Colin Babcock, sixth, and Cameron Miller, seventh, finished at 53.36 and 53.37 this morning.

Duke has two swimmers as Hunter Knight, 53.15, and freshman Peter Kropp, 53.55, made it in the fourth and eighth spots.

Virginis Tech has one, with freshman Brandon Fiala at fifth, 53.25.

UVa is first with Kyle Dudzinski at 46.06. His teammates Jack Murfee and Luke Papendick also made the top eight in third and sixth, 46.59 and 46.83.

NC State has two up as Andreas Schiellerup, 46.15, and Stephen Coetzer, 46.94, are second and seventh tonight.  Virginia Tech again with two swimmers with Morgan Latimer, 46.69, and Collin Higgins, 47.02, at fourth and eighth.

UNC fell on the wrong side of the line, with the 9-10-11th seeds this morning.