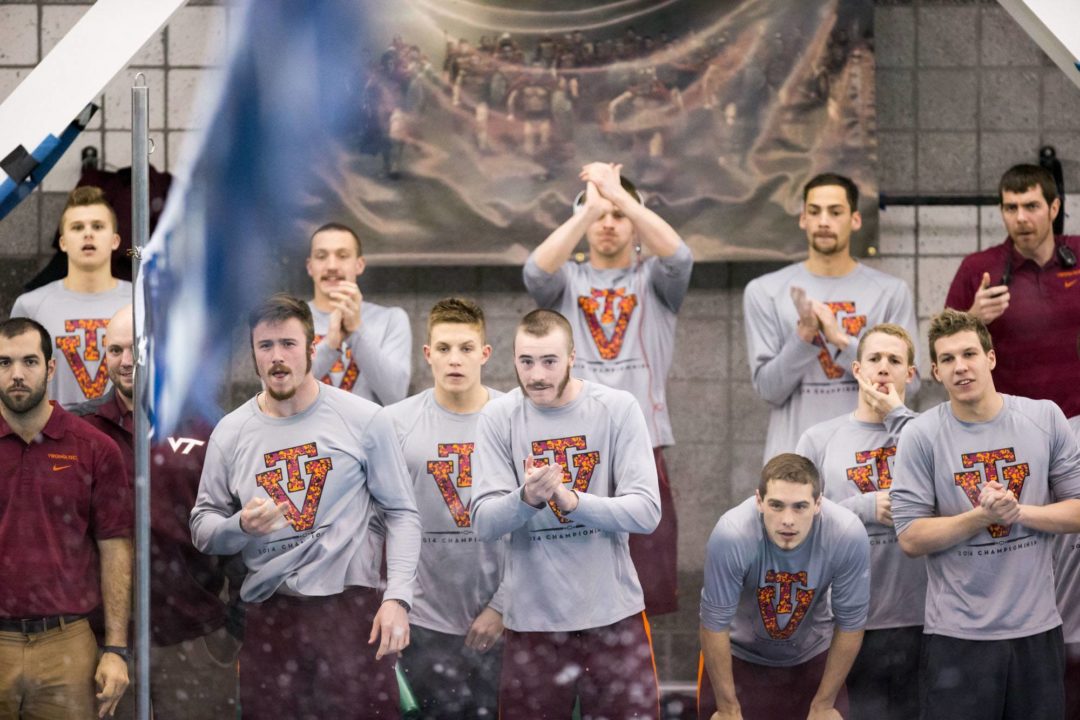 Virginia Tech has moved into the final day of competition at ACCs. Stock photo via Tim Binning/TheSwimPictures.com

Virginia Tech still leads this meet after three days, even with NC State still swimming outstandingly. The H2Okies have a 78-point advantage heading into the final day of racing, and should be the favorites to take home the trophy, although the meet could still go NC State’s way with plenty of points up for grabs tomorrow (and with NC State by far out-swimming seed to this point of the meet).

Those two have pulled out from the pack quite a bit. Florida State sits third, just over 100 back from the Wolfpack. UNC and Virginia still appear locked in a battle for fourth with Notre Dame now creeping up into contention on the strength of its two wins tonight.

This morning will include the 200 backstroke, 100 freestyle, 200 breaststroke and 200 butterfly. The 1650 timed final event will begin this afternoon, with the top 8 swimming at night.

The third day was supposed to be a ‘weak day’ for the NC State men, but as they’ve been doing all week long, the Wolfpack bucked expectations early in the Saturday prelims session. Junior Stephen Coetzer knocked sic seconds off of his seed time for a 1:40.53. That also demolished his own NC State Record, set last year, by two-and-a-half seconds. That shows just how dialed in this NC State team is right now – and even if they’re fully tapered for this meet, the times they’re putting up are well worth it.

North Carolina put two in the final with Patrick Myers (1:42.92) and Brad Dillon (1:43.24) as the 5th and 7th seeds, respectively. Virginia Tech did as well with a 1:43.00 from freshman Robert Owen, who was the only rookie to qualify for the A-final.

A brief explanation: Ups are A finalists, Mids are B finalists, and Downs are C finalists. Swimmers can not jump between finals in the evening session, and this is a good, quick short hand for how many points a team might score in finals.

NC State went for two top seeds in a row, and this time wound up with three of the top four in the men’s 100 free. That included very nearly a new ACC Record by Simonas Bilis in 42.25 (the youngest of the Wolfpack’s three A-finalists). That missed Scot Robison’s old record by just .04 seconds.

Joining them in that top 4 is 50 free champion Paul Murray from Florida State in 42.69 for the 3rd seed.

Georgia Tech will have some representation in this A final, as junior Andrew Kosic sits 5th in 42.93. That coaching staff has been very high on him since he arrived in Atlanta, and with another few tenths drop in finals, they could see that all come to fruition with an individual qualification for NCAA’s.

This is a race where Virginia Tech, the meet leaders, will give up a lot of ground to NC State tonight, but Bonk getting into the A-final and securing at least those points is big. The B-final has some huge swing potential: seeds 9-11 are all North Carolina State swimmers (yes, they had six of the top eleven seeds in prelims), in a tie for 12th are two Virginia Tech swimmers, and NC State again has the 14-15 seeds. Yes, NC State also has 8 of the top 15 100 freestylers.

Duke’s Hunter Knight has a chance to score some huge points for the Duke men coming out of the 200 breaststroke prelims, as he took the top seed in 1:55.47. That should be good enough to ensure he joins diver Nick McCrory at NCAA’s in March, and puts him in the middle of a very tight battle for tonight’s final. The top dive in this race were only separated by .22 in prelims.

Taylor Grey, the defending champion from Virginia, wasn’t far behind either in 1:55.84.

Florida State’s Juan Sequera (1:56.39) and NC State’s Ian Bishop (1:56.68) round out the A final. Bishop dropped over four seconds from seed, but that doesn’t fall as much in the ‘surprise’ category as some of the other swims we’ve seen from that team this week. This is an event where NC State will take a hit, with only one scorer tonight.

The North Carolina men, picking up where their women left off, are strong in this 200 fly, and sophomore Ben Colley took the top seed in 1:42.19 – which breaks both the Conference and Meet Records in the race. Also under the old record was Florida State’s Connor Knight in 1:42.46.

The top nine in this prelims were all under what was invited to NCAA’s last year; while we expect the invite time to be much faster this season, the top four all are still low enough that they won’t be sweating much through selection. Virginia Tech’s Morgan Latimer is the 3rd seed in 1:43.07, followed by Notre Dame’s Jon Williamson in 1:43.09.

North Carolina State’s Christian McCurdy is the 5th seed in 1:43.53, and a pair of Virginia Cavaliers (David Ingraham and Nathan Hart) were 1:43-highs for the 6th and 7th seeds.

Virginia Tech again has a chance to hold off NC State in this 200 fly, with two at the top of the B final and one at the top of the C-final; The Wolfpack have just one minor-final swimmer in John Newell, who is 15th after prelims.