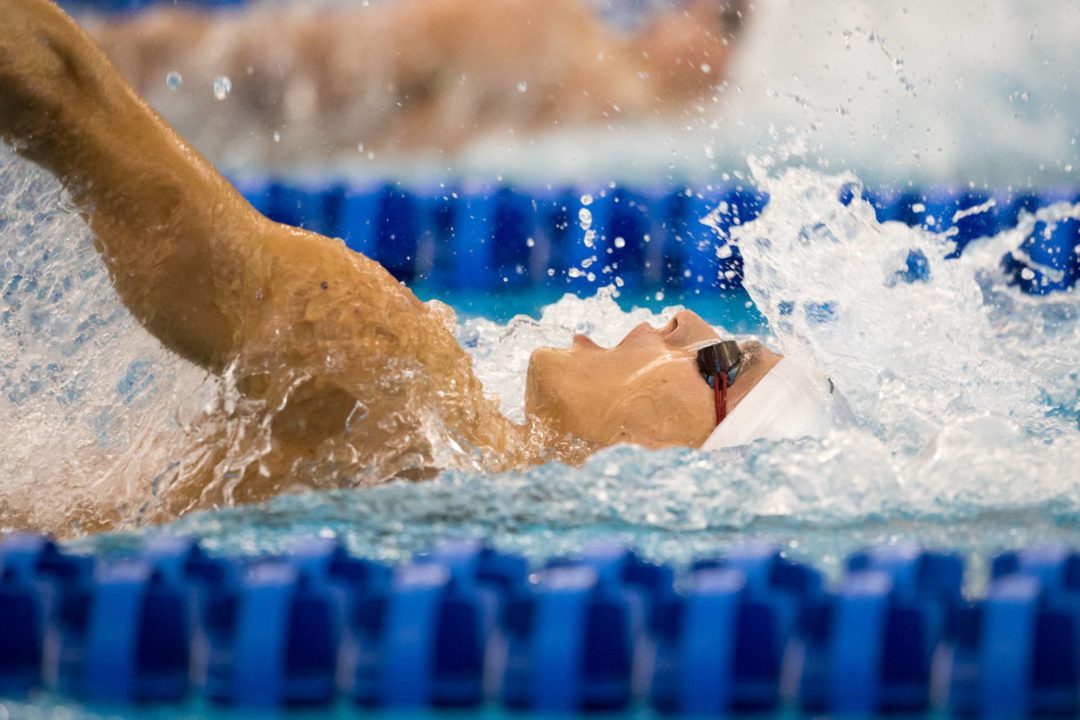 Pavel Sankovich won three titles tonight, setting the ACC record in the 100 back leading off the winning 400 free relay and taking the 100 fly and 100 back championships for the Seminoles. Current photo via Tim Binning/TheSwimPictures.com

Virginia Tech currently leads the ACC points, and they along with NC State had the best morning sessions, meaning the gap between the top two and the field should grow tonight, setting up a potential final-day showdown for the team trophy.

A pair of “A” cuts went down this morning, to Virginia’s David Ingraham in the 400 IM and FSU’s Connor Knight in the 100 fly. Look for a few more automatic NCAA bids to be picked up in tonight’s action.

The events tonight will kick off with the 400 medley relay. Individual races include the 400 IM, 100 fly, 200 free, 100 breast and 100 back. 3-meter diving will be added into tonight’s scores (all diving events took place during the women’s ACC meet a week ago) – the addition of those diving points causes some confusion with “current” points standings, so we’ll be referring to Meet Mobile’s points totals as our “unofficial” points standings for the night.

Florida State put an end to NC State’s relay dominance for the week by topping the Wolfpack in the 400 medley 3:04.47 to 3:04.80. That Seminole win was filled with solid splits all around. Pavel Sankovich went 45.3 to stake FSU to a lead of six-tenths, and that turned out to be the deciding factor. NC State outsplit the Seminoles in every split from there one, but only by a tenth of a second each time, and the steady grind wasn’t enough to overcome the FSU lead.

Though Virginia junior David Ingraham was the top seed and one of only two “A” cuts in the whole meet this morning, it was NC State sophomore Christian McCurdy who ran away with the ACC title in the 400 IM. He cut two seconds off his prelims time to go 3:43.61 and pass the field for the win. He was more than a second up on UNC’s Alex Gianino, who took second in 3:44.92.

Michael Miller, a freshman from Duke, moved up almost a second of his own to take third before Ingraham finally touched in 3:46.72.

Another pair of freshman came next, Tom Anderson of Notre Dame and Robert Owen of Virginia Tech, both 3:47s.

Virginia did get a nice performance out of the B final. Bradley Phillips dropped three and a half seconds to take 9th overall, going 3:45.34 in blowing away the consolation heat.

After a great backstroke split on that winning 400 medley relay, FSU senior Pavel Sankovich showed off his butterfly, going 45.12 for a new ACC record and another ACC title. He topped the field by over a half-second and put up one of three “A” cuts in the event.

NC State’s Barrett Miesfeld also got an automatic NCAA time in the race, going 45.79 for second, touching out another Florida State Seminole, Connor Knight, who was the top seed.

UNC’s Sam Lewis took fourth in 46.43 before a pair of Virginia Tech H2Okies finished. They were Morgan Latimer and Nick Tremols, both juniors and both 46.6s.

Notre Dame’s Frank Dyer ran away with this one, giving the Irish their first men’s ACC champion in their new conference. Dyer went 1:33.20 to win by almost a full second over NC State’s David Williams. Williams’ teammate Simonas Bilis almost got in for second, going 1:24.19 (Williams was 1:34.14).

Virginia Tech freshman Jan Switkowski was the highest-finishing rookie in the race, going 1:34.26 for fourth. That was enough to best NC State’s third finalist in the event, Italian senior Jonathan Boffa. Boffa took fifth in 1:34.90.

Notre Dame had the distinction of winning the top two heats in the event, as junior Kevin Hughes went 1:36.34 to win the B final.

Notre Dame continued its winning ways in the 100 breast, where junior Zachary Stephens went 52.59 to break the ACC record and win the second event in a row for the Irish. Stephens had enough to beat Virginia’s Yannick Kaeser by almost a half-second; Kaeser was 52.95.

NC State’s Ian Bishop went 53.01 after he was sub-53 this morning. The senior was solidly 3rd in the race.

Duke freshman Peter Kropp led the rest of the field, who all came in right together. His 53.34 was just ahead of a tie for fifth between Colin Babcock of Notre Dame and Hunter Knight, also of Duke. Those two went 53.43, with another Fighting Irish representative, Cameron Miller, seventh in 53.54.

Virginia Tech’s Bradon Fiala took 8th place with a 52.92. The B final also provided some fireworks, with FSU freshman Jason Coombs putting up a 53.09 that would have gotten him 4th overall.

Pavel Sankovich is giving a clinic on great single-session conference championship performances. After his relay-winning split on the 400 medley, Sankovich came back to win the 100 fly, and now he’s added the 100 back to his win list. He went 45.83, which would have been a conference record, had he not already broken the mark leading off that medley relay. The FSU senior once again topped NC State’s Andreas Schiellerup to pick up this win, his third of the championships in individual events after taking the 200 IM yesterday and the 100 fly earlier tonight.

Schiellerup, a freshman, went 46.15 for second place, with Virginia senior Jack Murfee third in 46.30. Murfee’s teammates Kyle Dudzinski and Luke Papendick followed him in, and Virginia Tech’s Morgan Latimer was the final swimmer under 47 with a sixth-place 46.99.

As stated at the top, since diving took place last week, the scores during the meet are a bit sporadic as different diving events get added into each night’s totals. These scores come from the Meet Mobile app and are unofficial, though they appear to have all of the diving scores added in.

Virginia Tech still leads, even with NC State still swimming outstanding. The H2Okies have a 78-point advantage heading into the final day of racing, and should be the favorites to take home the trophy, although the meet could still go NC State’s way with plenty of points up for grabs tomorrow.

Those two have pulled out from the pack quite a bit. Florida State sits third, just over 100 back from the Wolfpack. UNC and Virginia still appear locked in a battle for fourth with Notre Dame now creeping up into contention on the strength of its two wins tonight.