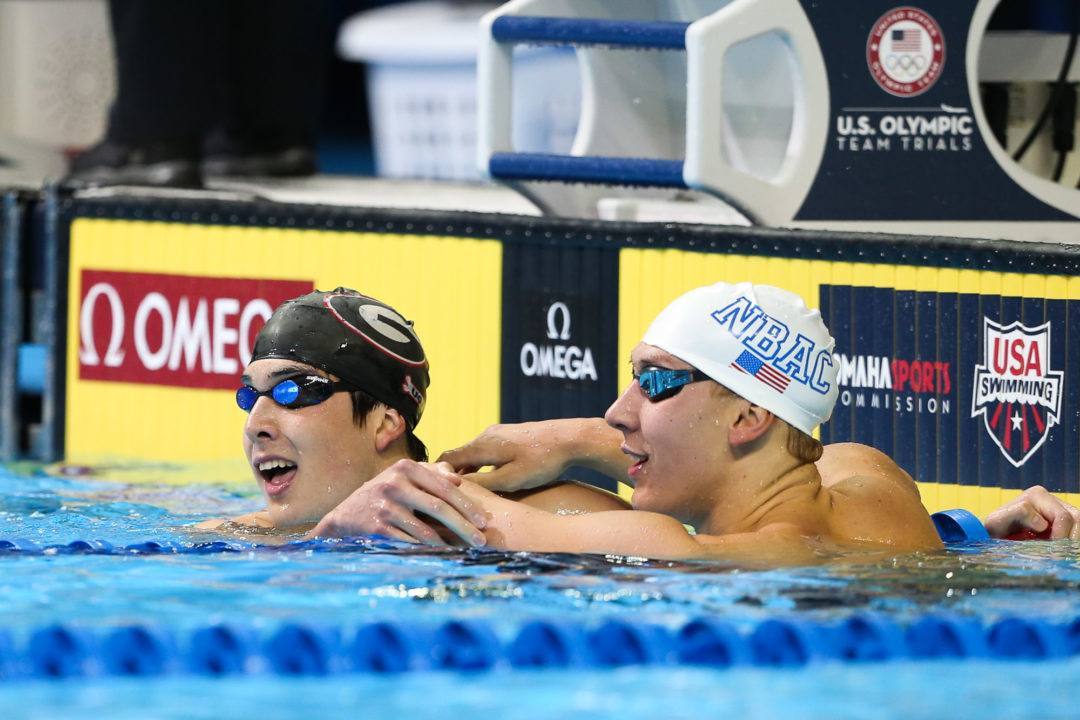 Meet Jay Litherland, the University of Georgia IM’er who qualified for his first Olympics after beating defending Olympic 400 IM champion Ryan Lochte in that same event at the U.S. Olympic Trials. In his video below, Jay (one of the Litherland triplets), says he’s always loved the water and that his family had a backyard pool that he loved playing in. Like many swimmers who make a national team, Litherland was honored to see his first Team USA cap with his name on the side. The 400 IM is his best event, and that’s the race he’ll be racing in Rio.

Jay Litherland is a versatile swimmer originally from Alpharetta, Ga. Litherland has been a member of USA Swimming’s National Team as well as the National Junior Team. He’s currently in his Junior season at the University of Georgia where he’s majoring in Business. He’s one of three Litherland swimmers on the Georgia team, as Jay, Mick and Kevin are triplets. Litherland has triple citizenship in the U.S., Japan and New Zealand – he can also speak Japanese. He started swimming at the age of 8, and he says that swimming was the only sport he was good at. Although recently as a college student he also enjoys skateboarding in his down time. He’s primarily an IM swimmer, was named to the National Junior Team for his performance in the 200 IM and even got his first NCAA ‘A’ cut in the 400 IM in his first season as a Bulldog. Born Aug. 24, 1995 to parents, Andrew and Chizuko Litherland, he attended Chattahoochee High School, and he swam for Dynamo Swim Club coached by Franz Resseguie. He also was a high school All-American.

As a freshman Litherland competed at the Georgia Invite where he went best times in many of his events. He also swam at the SEC Championships – he finished seventh in the 400 IM, 10th in the 200 backstroke, and 13th in the 500 freestyle.

Litherland made huge improvements in his second year at Georgia. At the NCAA Championships he won bronze in the 400 meter medley and came 14th in the 200 meter backstroke. On the 800 meter freestyle relay, Litherland helped Georgia to finish 5th.

International Competition
Litherland competed at the 2014 Junior World Championships in Dubai as well as the 2013 World Cup in Asia. He was also a 2012 U.S. Olympic Trials qualifier finishing 53rd in the 400m IM and 36th in the 200m backstroke.

Litherland won gold in the 400 meter medley ahead of his USA teammate, Josh Prenot in 4:12.43.

In the first event of the 2016 Trials Litherland finished 2nd in the 400 meter medley behind his Georgia teammate, Chase Kalisz, to punch his ticket to the Rio Olympics. At the 300 mark Litherland was two seconds behind Ryan Lochte in 2nd but he powered through the freestyle leg with a 57.38 split to take the silver in 4:11.02. That time moved him up to fourth in the world so far this year.

Blame it on Lochte’s hurt groin.
4:11.03 is still wicked fast though. A lot faster than I can go XD

Easy laptop for sure