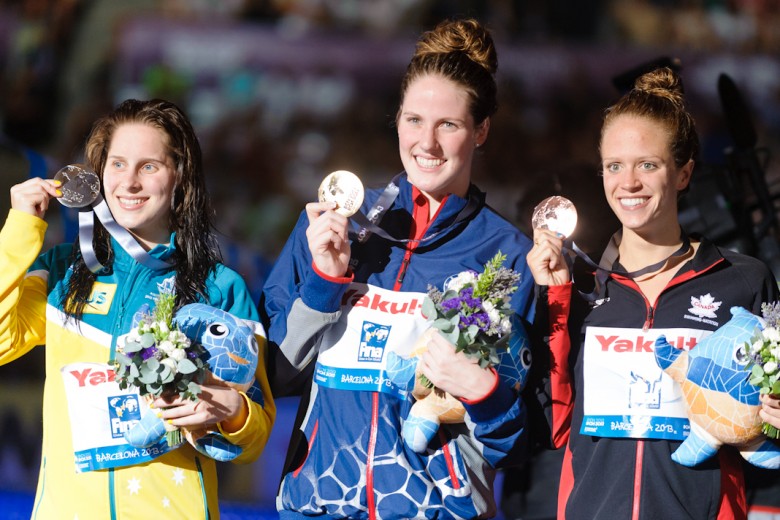 Mityukov Shaves .11 Off Swiss National Record In 200 Back

Well, the 2013 FINA Swimming World Championships have concluded.  In lieu of a longer written summary, here are some more highlights of days 7 and 8, as well as the overall medal table…

Even though this was thought to have possibly been a down year with some pretty significant retirees leaving the ranks, Team USA didn’t take too much of a hit without the likes of Michael Phelps.  The American squad got Wonder Woman-esque performances from Franklin and Ledecky, but also had a lot of first-time individual qualifiers step up and earn medals (Michael McBroom, Eugene Godsoe, Chase Kalisz, and Jimmy Feigen to name a few).

Percentage of swims faster than entry time at BCN13 – (nations with 20 or more starts).

We have understood you are not a friend of USA in general.
I’m not an enemy of the Russian swimmers.
I say just that Ustinova isn’t the cleanest swimmer in the world. She has had a few problems this year.
And about Russian potential, if you have read me, I have even written the biggest rival of the US team in the women’s medley relay in the next years wouldn’t be Australia but Russia.

ah bobo you are too nice. theres a reason for Daria’s speed and lets just say its not legal.

as for politics i guess we’ll just have to go with what SLAVYSIA says. you seem 140% sure 😉

that’s the russian funny accent ” we will crush you ” type of …;

This must be said in the voice of Ivan Drago.

this is very presumptious from u to affirm Golds well before anything happened . Russia is a very good nation in swimming for a long time but u are going too far ahead . Bring those guys to top Performances first , than we shall seee ……

When Russia will bring at least 29 medals in their bags ( and WR’s )and outstanding performances , than we will beleive you . LOL

Still 14 year-old Daria Ustinova will be faster than Franklin in 3 years, maybe even in Kazan 2015.

Does she have the “tude”?

After Shanghai we had a poster or two say the same thing about Zevina and van Rouwendaal.

If you split that medal table into 2 – men and women – you’ll see that USA men weren’t that impressive at all.

It’s kinda hard to make that comparison when you have the likes of Ledecky and Franklin. I counted 13 total medals for the women in the pool, and 15 for the men. Not as many golds obviously for the men, but overall a pretty balanced team. Maybe not to your standards, but compared to other countries, no other country compares with the USA men with regards to depth.

Actually a team where the women are dominate is Australia. They have upcoming male talents, but the women accounted for 9 total medals and the men just 4.

Goose egg for the men in breaststroke.

You have a typo there.

And BRA behind Russia, not behind Sweden..

In my opinion an overall number of medals create a best impression of the success of a particular country. Australia is easily the second best nation behind the USA.

I agree with you swimfanfinland but the medal table isn’t built like that. So France is ahead of Australia.

and France did an overalll better meet compare to Australia ( who had a much bigger contingent of swimmers ) . Bravo to France !

But with the women’s 800 free it’s better.
http://www.youtube.com/watch?v=3SIOr1NQ3ms