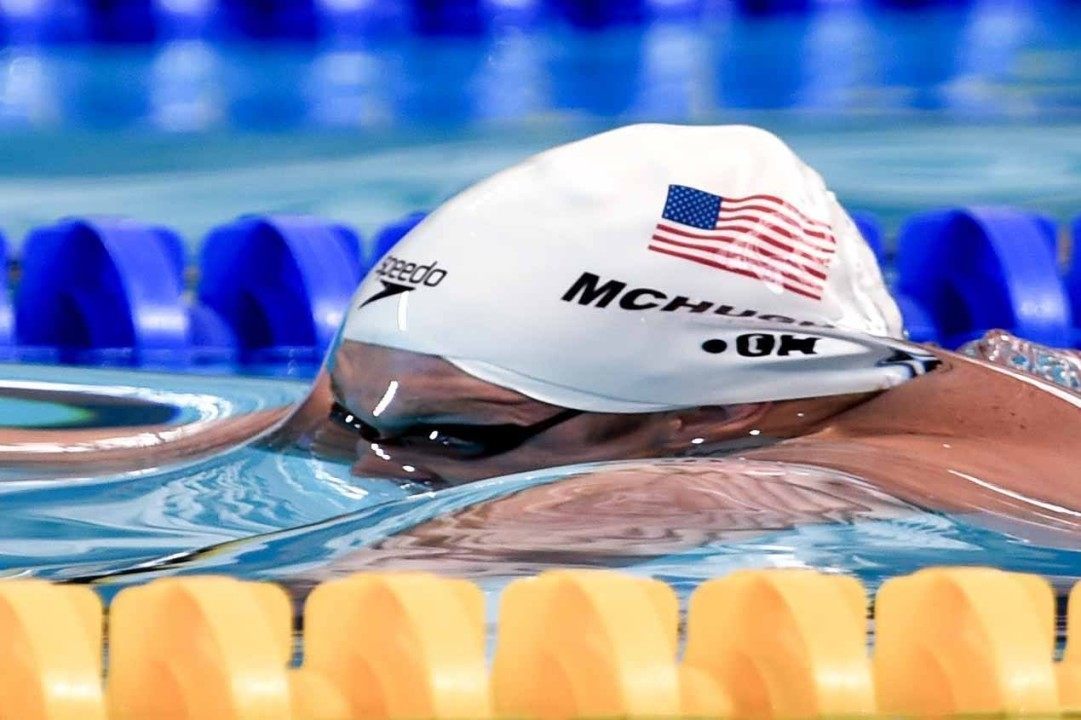 Both the men's and women's meet records were taken down for the 100 breaststroke at the KMSC Pro-Am Classic, with personal bests by Katie Meili and Brendan McHugh. Current photo via Mike Lewis/Ola Vista Photography

Day two action at the KMSC Pro-Am Classic featured several professional athletes in top form, amateurs taking prize money spots away from the pro’s, and two meet records broken.  Prize money for this meet is awarded to professionals based on their “absolute finish” in the top three, meaning that amateurs who take podium positions decrease the number of cash awards given.  This makes the King Marlin meet a very interesting mix of seasoned professionals and top athletes from clubs around the country.  Each event can give $600 for a first place finish, $300 for second, and $100 for third, with prize money doubled for the 50 freestyle shoot-out and the 1650 freestyle.

Fifteen year old Samantha Shelton was the top seed after this morning’s preliminary 1:47.29, followed closely by Mission Viejo teammate Stephanie Peacock at 1:47.50.  Both Nadadores managed to significantly improve upon their seed times, but were not able to fight off Karlee Bispo, who took the event from lane six with 1:45.32.  Shelton was second with a personal best 1:45.50, and Peacock was third at 1:45.74.  Schroeder Y’s Ashlyn Schoof edged out Ashley Twichell for the fourth place spot, 1:48.02 to 1:48.07.  Houston Swim Club’s Logan Schiller was sixth at 1:48.68, while Jillian Hatch and Stephanie Bartel, both from Clovis Swim Club, took the last two A-final places with 1:51.10 and 1:52.45 respectively.

Brendan McHugh crushed the meet record 52.22 set in 2013 by Naoya Tomita, with a personal best 51.62. McHugh’s previous best of 51.68 was set last December in Oklahoma.  Roland Schoeman took the second place prize money with 52.17.  Third and fourth place were both taken by athletes from Austin Swim Club, with Ryan Fisher third at 53.97 and Kevin Steel fourth with 54.89.  Rounding out the top eight were Lakeside Aquatic Club’s Tristen Disibio (55.57,) Mission Viejo’s Trent Pellini (57.06,) Houston Swim Club’s Davis Bryan (57.26,) and the 41 year old Coach of the Jasper County Killer Whales, The Screaming Viking who hobbled in at 57.84.

Two of the three podium positions for the women’s 100 fly went to athletes from Schroeder Y.  17 year old Ashlyn Schoof turned in 54.74 for third, beating out Springfield Aquatics’ Bailee Nunn’s 54.75 for the third spot on the podium.  Second went to SSTY teammate Hannah Saiz who touched at 52.69.  It was Arianna Vanderpool-Wallace who took the top prize money with 52.13.  Rounding out the top eight were Dad’s Club’s Emma Stephenson at 55.01, MVN’s Samantha Shelton at 55.36, Houston’s Hannah Sumbera at 56.55 and Sooner Swim Club’s Tiffany Wu with 57.06.

Mission Viejo managed to take the win for both the men’s and women’s 400 free relays, holding back strong squads from Lakeside Aquatic Club in both events.  The team of Victoria Epps, Andrea Felix, Stephanie Peacock and Samantha Shelton turned in 3:23.95 to take the win for the women’s event.  Daniel Kim, Grant Shoults, Logan Redondo and Marc Morizono combined for 3:02.07 to win the men’s race.

Screaming Viking, at least we both made the final!!! Really good for our age!!! Proud of you!