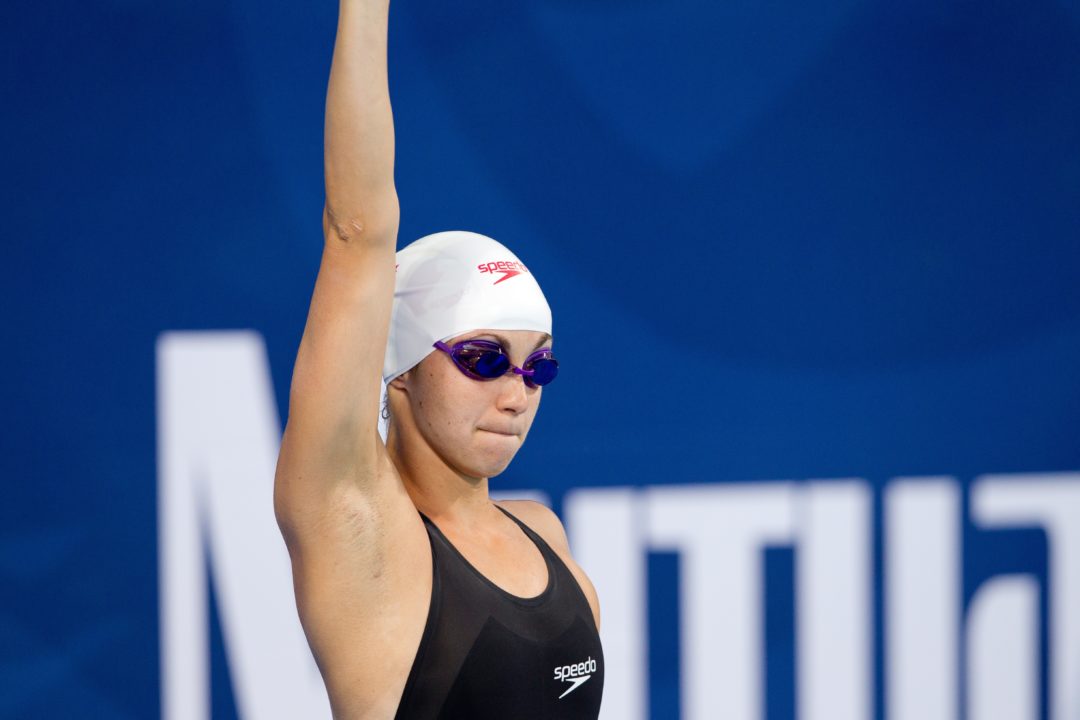 Canada's three golden flyers will be facing off again tonight in the 200m fly... Current photo via Tim Binning/TheSwimPictures.com

Day two at the short course meters Canada Cup started this morning, and like yesterday it’s setting up tonight to be a fast finals session.

In the women’s 100m free, lots of big names qualified for finals this morning including Victoria Poon and Noemie Thomas. Thomas won a silver last night in the 100m fly and a bronze in the 50m freestyle. Ariane Mainville who won the 50m freestyle last night will also be in the final as well as Kennedy Goss, Barbara Jardin, and Paige Shultz. Goss won the 200m freestyle last night, however, Jardin posted the fastest time after swimming a 1:58.86 to win the B final. Goss also placed fourth in the 50m backstroke and eighth in the 200m backstroke. Shultz had two medals last night, a bronze in the 200m free and a silver in the 200m IM. Poon and Mainville separated themselves from the field this morning, but swimmers from third to eighth seed are all within 0.22 seconds of each other.

Canadian Olympians Tera Van Beilen and Martha McCabe will face off again tonight, this time in the 50m and 200m breaststrokes. Beilen qualified fourth, McCabe sixth for tonights final. McCabe, not known for her raw speed, has been showing some very fast in-season sprints already, so a surprise could definitely be in order for tonights must-see final. McCabe took the top seed in the 200m as predicted, Van Beilen qualified for the final in fourth. McCabe is the one to beat in the 200m breaststroke after coming off a big win in the 100m breast last night.

50m breaststroke winner Kevin Deret will be swimming again tonight, this time in the 100m breast. Luc Boudreau who won the 200m breaststroke last night will also be in the final to round out the field. Although Deret is looking like the favourite, there could be a surprise outside-smoke from McMaster University’s Konrad Bald. Bald qualified eighth for the final, but had the fastest seed time heading into the meet of 1:00.14.

Coleman Allen will be facing off with Toronto Swim Club’s Edward Liu in the 100m fly tonight. Allen posted a time of 52.64 this morning, Liu was just behind him in 52.91. The two have established a big gap between them and the other finalists. The two have raced each other before at the 2013 Canadian World Championship Trials.

Danielle Hanus and Emma Ball who went 1-2 in last night’s 50m backstroke final will be back tonight in the women’s 100m backstroke. The two 15 year old’s are the youngest in the final. Oakville’s Dominique Bouchard took the top seed this morning in 1:00.00. Hanus had the fastest seed going into the meet of 59.07 and as we saw last night, she can bring her A-game in the finals.

Last night’s 100m backstroke champion Russell Wood took the top seed heading into the 50m backstroke tonight. Bronze medallist Matthew Swanston is heading into the final, qualifying in second. Despite having the fastest seed last night, Swanston was not able to defeat Wood, but looks to do so tonight in the shorter sprint event.

Canada’s three golden flyers will be facing off again tonight in the 200m fly. Last night, Katerine Savard won the 100m fly followed by Noemie Thomas and Audrey Lacroix. Lacroix took the top seed this morning in the 200 followed by Savard and Thomas. Lacroix is better known for her 200 whereas Thomas and Savard are better known for their 100. Thomas probably has the least experience in the 200 as opposed to the other two, but has said she’d putting a little more focus on the 200 this year than she did in previous years. This final should shape up to be just as exciting as last night’s.

The men’s 200m IM final tonight will feature Tristan Cote again. Cote snuck into the final in eighth place, but could do some damage tonight coming off his win in the 400m IM yesterday. 200m fly silver medallist David Sharpe will also be in the final. Bogdan Knezevic is the leader going into finals, posting a 2:03.64 this morning.

Savannah King will be back tonight after winning the 800m freestyle last night, and 10 minutes later swimming in the 200m freestyle final. King will be swimming the 400m freestyle alongside fellow Olympian Barbara Jardin. The girls qualified third and fourth respectively, but are the ones to beat tonight. King has the fastest seed and has shown that she can do some fast in-season swimming here at the Canada Cup. King, better in the 800 and Jardin who’s better in the 200 will meet in the middle tonight to decide the 400m free winner.

The women’s 100m IM will be jam-packed as well with Canadian stars. Three members of last year’s World Championship team will be in the final: Katerine Savard, Barbara Jardin, and Erika Seltenreich-Hodgson. Savard posted the fastest time this morning with a 1:02.95. Last night’s medallists Kennedy Goss and Paige Shultz will also be in the final, Shultz taking the third seed and Goss qualifying in fourth. With many big names  the final for the non-olympic event should shape up into a very competitive one.

World Championship team member Russell Wood will be present tonight as well in the men’s 200m backstroke final. Wood qualified in second in 1:58.82. With the way he swam at last night’s finals session, Wood is the man to beat in this event.