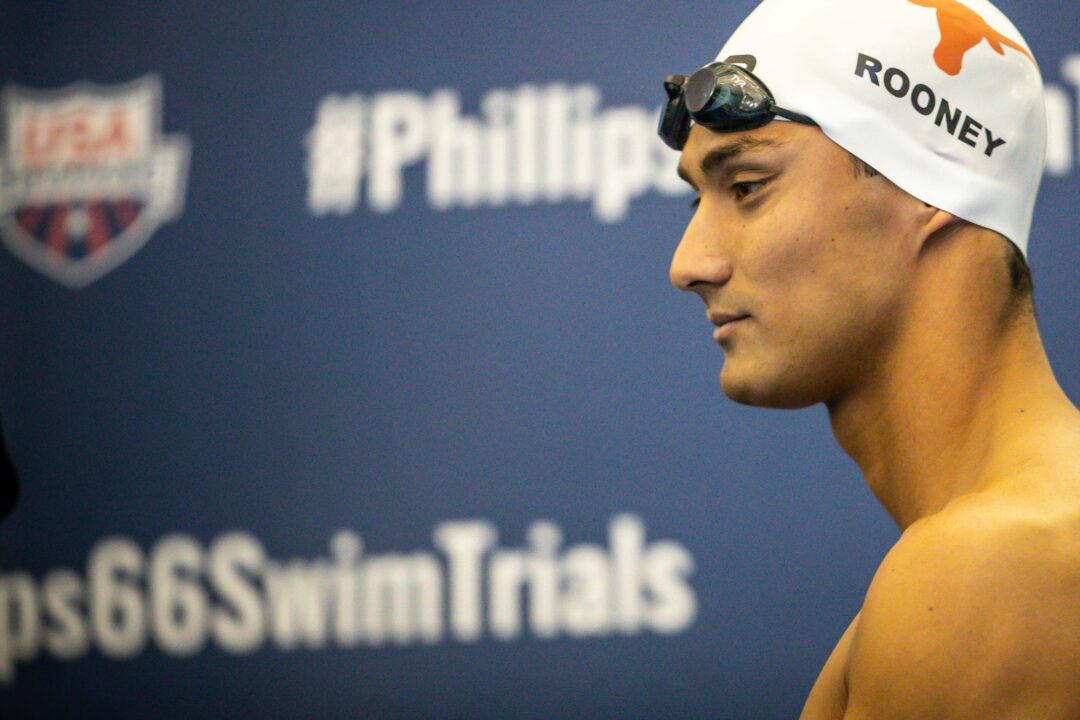 Maxime Rooney never got over the hump for an open-age U.S. international team, but he did have one of the fastest single-meets that swimming has ever seen. Archive photo via Jack Spitser/Spitser Photography

Maxime Rooney‘s performance at the 2019 US National Summer Championships felt like the fulfillment of his potential.

The meet, which came shortly after he announced that he would transfer from Florida to Texas for his senior season, saw him finish 2nd in the 100 free in 47.61 and win the 100 fly in 50.68. Those times currently rank him as the 24th-fastest and 13th-fastest times in those events, respectively, all-time.

In high school, Rooney swam 1:33.70 at the 2016 North Coast Section Swimming & Diving Championships. That swim broke Tom Shields’ National High School Record in the event and set Rooney up for a lot of expectations as he prepared for his NCAA career at Florida.

After winning just one individual All-America award in his first two seasons at Florida, via a 6th-place finish in the 200 free as a freshman, his junior year for the Gators was his breakout, albeit not in the race for which he was best known. Rooney swam 44.99 in the 100 fly at the 2019 NCAA Championships to finish 4th, and it looked like he was finally getting over the hump collegiately.

That momentum carried big-time into the summer. While the U.S. had already chosen their World Championship team for the year, Rooney went to the summer-ending Phillips 66 Summer National Championships and marked a statement swim in prelims of the 100 fly of 50.68.

He was over 51 seconds in final, but easily beat a field that included name-swimmers like Jack Conger and Jack Saunderson and Ryan Held. Even without going to World Championships, he ended that season ranked #2 in the world behind only Caeleb Dressel’s World Record.

That put Rooney into prime position heading into his senior season of collegiate swimming and what was supposed to be an Olympic year. He was well-ahead of the rest of the American field and had a beat on not only a spot at the Olympics, but a spot on the Olympic podium in his sights.

His senior season at Texas was going well, including a 44.83 mid-season 100 fly at the Minnesota Invitational that will wind up being his career best. But as we all know by now, COVID hit. His last NCAA Championship meet was a bust, and the Olympic Trials were pushed off a year, and Rooney, like most swimmers, was left to find a path forward that wasn’t quite to plan.

While Texas wasn’t hit too hard by lockdowns, coming out of the pandemic he looked okay, going 53.99 at the first 2021 Pro Swim in January and 52.71 later in March.

While he certainly wasn’t bad coming out of the pandemic, he never lifted to the same peak that he did in 2019.

And that was a big part of the story of Rooney’s results in his decorated career. He rose to really high peaks, but never summited the mountain that he showed he was capable of.

Rooney raced at the Junior Pan Pacific Championships in 2016 and the World University Games team in 2017, but never qualified for an open team – in short course or long course.

Based on his peaks, I don’t think there are any American men of the last 15 years who have left fans longing for his international long course potential quite as much as Rooney.

Retiring just past his 24th birthday, Rooney was at an age where maybe his best times, and maybe his first senior US team, were still ahead of him. Even leaving the sport at such a young age, he left a big impact on the history books of swimming.

While the medals of Dressel, Phelps, and Crocker put them at the top of many very short lists, in one specific category, Rooney is toe-to-toe.

Among Americans who were elite in both the 100 fly and 100 free, Rooney stands behind only Dressel and Phelps.

While those two both have 49-second 100 meter butterflies to their name, neither (yet) has a 47-second 100 fly on their register.

Always loved watching him swim, and he seemed like the sweetest and classiest person. I wish him all the best in future endeavors.

Steve Crocker. Sure, he only swam the 50 Free but he was always third to Jager and Biondi.

0
0
Reply
Braden Keith
Author
Reply to  How much can CD bench???

“While those two both have 49-second 100 meter butterflies to their name, neither (yet) has a 47-second 100 fly on their register.”

Didn’t know anyone had a 47 second 100 fly on their register! Incredible!

Ryan Murphy on the fly/free list. I forget how versatile he is.

I always felt like he could make a 400 free relay if he went after it.

I expect Mollie to sneak up that list very soon

Imagine how fast he would have been if he prayed a little longer each day. Sky’s the limit.

I always wondered why he chose Florida over cal which was in his back yard. I feel he would have thrived at cal with the likes of shields having the same events in hs. And him transferring to Texas his senior year just left a bad taste imo, especially with how great Florida was under nesty. But hey still a good career.

You’re confused as to why a college student wouldn’t want to go to college in the same area where they grew up?

Many have transferred from Florida. That environment is not for everybody. He made the right choice.