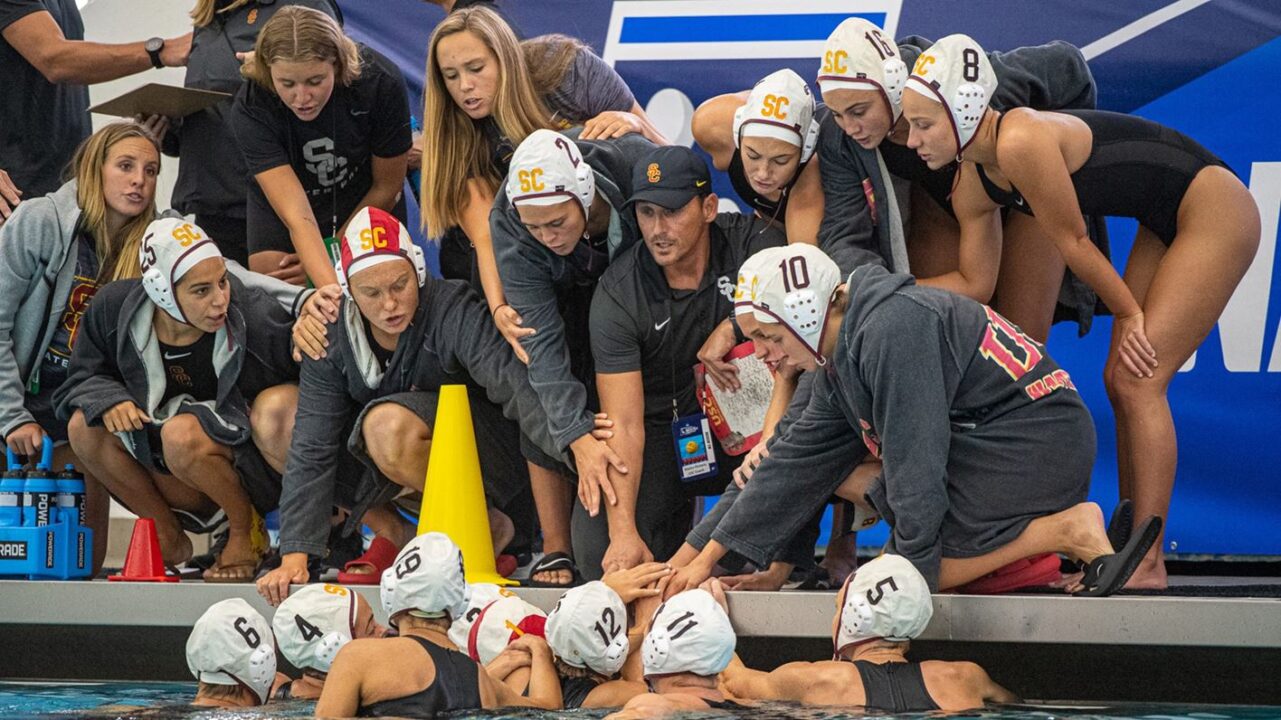 In a fierce battle for the 2022 title, USC takes a 10-7 loss to the Cardinal in Ann Arbor. Current photo via Eric Bronson

ANN ARBOR, MICH. — The USC women’s water polo team came up shy of its first back-to-back national championships when top-seeded Stanford made a late push to win today’s NCAA title match 10-7 in Ann Arbor, Mich. The Trojans had the game tied up a 7-7 early in the fourth period and continued to make big defensive plays — anchored by a career-high 13 saves from goalie Carolyne Stern — but the Cardinal capitalized on late chances that opened up while USC misfired down the stretch. USC finishes out the year with a 20-4 overall record after making its 18th straight trip to the NCAA Tournament.

USC never trailed in the first half of play as the Trojans paired stingy defense with some big offensive efforts. Mireia Guiral punched up the Trojans’ first two goals — the second strike marking her 100th career goal — around a 5-meter penalty shot from Stanford. Up 2-1, USC’s Alejandra Aznar sizzled in a 6-on-5 score for the Trojan cause, and USC was up 3-1. Bayley Weber squashed a Stanford power play next with her second of several field blocks on the day. But the Cardinal converted on its next chance to get one back in the final minute, and it was 3-2 USC after eight minutes of action.

Weber found Paige Hauschild with 5:35 on the clock in the second to punch up a 4-2 USC lead, and the Trojan defense would shut down two more Stanford 6-on-5s soon after, with Honnie Vandeweghe-O’Shea nabbing a steal and then Stern coming up with the save to preserve the two-goal lead. Back-to-back Stern saves came next, but Stanford was later able to score from the post, and it would be a 4-3 USC lead at halftime.

In the third, Stanford found its scoring touch, opening up with a quick strike and then scoring on a 6-on-5 to take its first lead of the game, up 5-4 at 6:10. Vandeweghe-O’Shea let one fly to lock things even a minute later, but yet another Stanford 6-on-5 would follow, and the Cardinal cracked the USC defense again to go up 6-5. Defense won out the rest of the frame, and USC was looking for a comeback push in the fourth. Tilly Kearns was up to the challenge. Guiral set the table for Kearns, who ripped a backhand to level it 6-6 early in the frame. Stanford got yet another power play goal to go 20 seconds later to edge back ahead, but then it was Kearns again. After drawing the exclusion, Kearns got a quick pass back from Aznar for another equalizer. That 7-7 snarl lasted almost four minutes, as Stern and Weber traded turns snuffing Stanford attacks. With 2:54 to go, though, Stanford broke through, going back on top 8-7. USC was stopped on its next 6-on-5 chance, and then Stanford converted on the counter to  put USC in a tough spot, down 9-7 with 2:00 remaining. Another USC look on goal was stymied, and as the Trojans pulled their goalie in order to get an extra attacker, Stanford was able to escape and find the open net with 26 seconds left. That decided it, and the Cardinal emerged with the 2022 title.

At the end of the competition, USC’s Tilly Kearns and Paige Hauschild were named to the NCAA All-Tournament First Team.