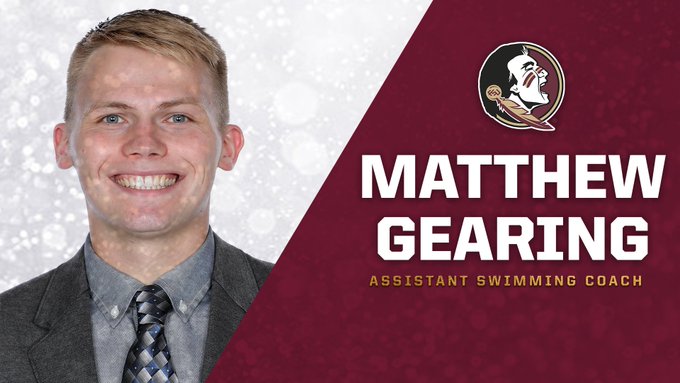 Gearing arrives in Tallahassee after one season as an assistant coach at Arkansas-Little Rock. Current photo via @FSU_Swimming/Twitter

“We’re excited to have Matt on our staff,” FSU head coach Neal Studd said. “He’s worked with some of the best swimmers in the world and as a young coach, that experience is invaluable. He fits well with our staff and team culture, and we’re thrilled to have him.”

While at Arkansas Little-Rock, Gearing helped the program improve drastically, despite dealing with the challenges of COVID-19 during the 2020-21 season.

The Trojans broke six school records and had 17 performances that ranked within the top five in school history.  They scored over 100 points more at the 2021 Missouri Valley Conference Championships and placed twice as many Trojans on the podium than 2020.

Gearing help secure one of the top classes in the Missouri Valley Conference and program history for the 2021-22 season, all while abiding by rules of the COVID-19 dead period.

During his stint at Indiana, Gearing was promoted to a full-time assistant in February of 2020 after starting as a volunteer in 2019.

He was responsible for generating workouts for the mid-sprint group that included Pieroni, Apple and NCAA medalist Robert Howard.  He was also responsible for tracking volumes and intensity among all training groups for the Hoosiers.

Gearing was a vital asset in on and off campus recruiting, helping the Hoosiers remain among the top 10 in the nation. He also served as the director and coach for the 2019 Indiana Breaststroke camp and 2020 Indiana Freestyle camp.

Gearing graduated from Queens University of Charlotte in 2018 with a Bachelor of Science degree in Exercise and Sports Science.  He served as undergraduate volunteer assistant coach during all four seasons, where he was a part of eight NCAA DII team titles between the men’s and women’s programs.

Concurrently, he worked as an assistant for Team Elite Aquatics under head coach, David Marsh who was recently inducted into the International Swimming Hall of Fame in 2021.

Gearing had a front row seat watching Marsh lead Team USA at the 2016 Rio Olympics, with his six athletes securing gold medals during the Games.

In addition to coaching, Gearing assisted Team Elite with planning of day-to-day training for athletes vying for national and Olympic team spots.

While in Charlotte, Gearing assisted with stroke analysis and handled administrative and operations duties for both teams.

“I’m grateful for the opportunity that Neal Studd has provided me with working at such a great program like Florida State,” Gearing said.  “Throughout the interview process I really got a sense of the family atmosphere FSU and the program have created in Tallahassee.  My wife, being a native of Florida, and I are extremely excited to be getting closer to family especially with the birth of our first child come January.  Can’t wait to see what lies ahead for the Noles and continuing to build upon the success the program has had.  Go Noles!”

A native of Kettering, Ohio, Gearing is married to the former Caroline Condon.

Congrats! I must say he looks very young….maybe I a, jealous cause I look very old

Agreed, I thought wow this guy looks like a teenager!

I wonder if his parents let him drive to morning workout or if they just drop him off.

Matthew Gearing is a great coach that is trusted by many high profile coaches out there. This article highlights the top of his credentials but not the hours and hours he spent learning the business. His social media page always shows great support for whatever program he is on (regardless of their speed and results) and the athletes he works with (at all levels) trust his judgment.

I remember a few years ago when Matthew was just a team manager at Queens and attended a dryland clinic I held in Charlotte and how eager he was to soak up any knowledge he could. I have no doubt he’s continuing that since I’ve seen him last and I’m sure he’ll be a great addition to the FSU program. Keep it up Matthew!