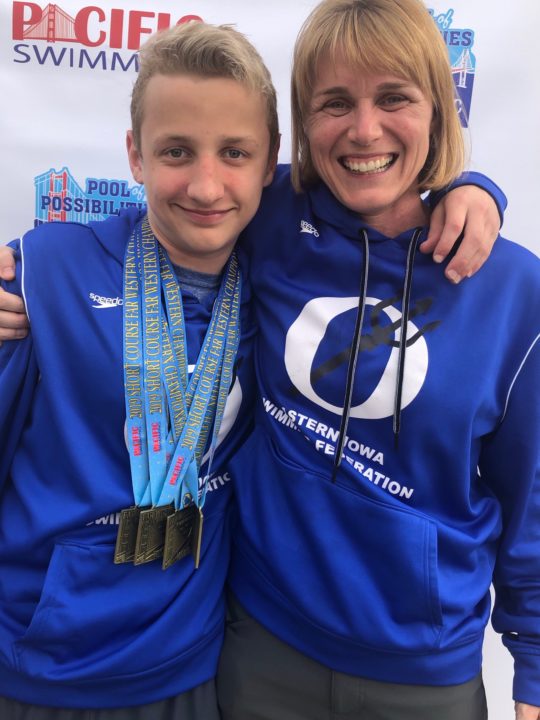 The 11-12 boys 500 free record which Turner broke had stood since 2008, and was held by Nick Silverthorn. Current photo via Megan Oesting

Mason Turner of Eastern Iowa Swimming Federation broke a national Age Group Record (NAG) tonight at the Far Westerns Short Course Championships. The 11-12 boys 500 free record which Turner broke had stood since 2008, and was held by Nick Silverthorn. Turner rocketed to a 4:41.26, undercutting the previous record, which stood at 4:41.54. Turner and Silverthorn are now the only 11-12 boys to ever crack the 4:44 mark.

The time marked a gigantic drop for Turner, who had just set his personal best of 4:49.14 in late February at the Iowa Short Course Championships. On top of breaking the NAG, he also won the event by an astonishing 20.4 seconds. Here is a comparison between turner’s time from February and his time from tonight:

Probably the biggest note between these two races is that he was far more aggressive on the swim tonight. Turner was 1:52.29 on the first 200 of his 4:49 in February, then fast-forward 6 weeks later and he posted a 1:48.16 on the first 200. Also of note, the only split from the February race that was faster than the corresponding split from the April race was the last 50.

Congrads to Mason and Coach Megan!

Amazing!!! Huge swim by Mason! Congrats to him, his coach, and his team.

Swimswam, is there much data out there to see the progression of NAG record holders and where they end up? A few stand out like MP, MA, Missy etc. just curious to see the trend.

We did a mag article a few years back about more broadly top 16 swimmers. Subscribers can read old issues online, if you’re interested in that. Part of the challenge with doing broad data on NAG Record holders specifically is that they don’t archive NAG Records well. We can usually still figure them out, but it just takes a… Read more »

Nick Silverthorn had a good career at Cal, probably with some type of scholarship and a good amount of academic success (I seem to recall he was an Academic All American). Perhaps not quite the level of in-pool success someone who had one of the fastest 100 y breaststroke times coming out of high school (and a 500 y NAG to boot), but I doubt he would trade the experience of swimming on one of the best college teams in the Nation.