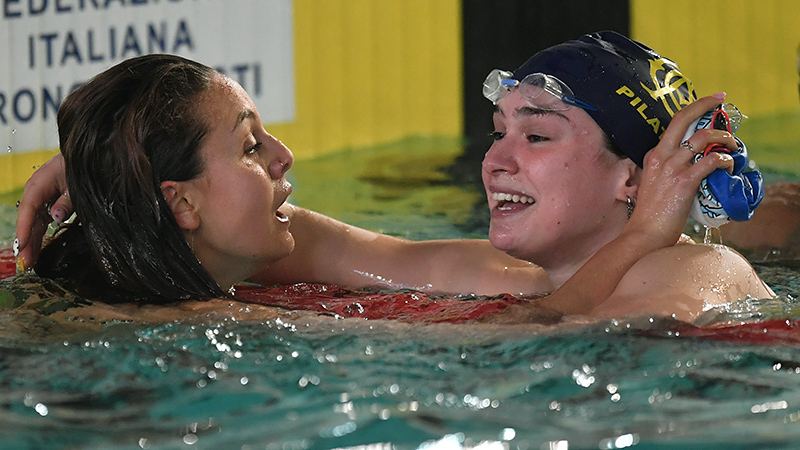 Carraro punched her ticket to Tokyo after a race that produced the three fastest performances in Italian history in the 100 breast. Current photo via Andrea Staccioli/Deepbluemedia/Insidefoto

On night three of the Italian Olympic Trials, one new name joined the Olympic roster in dramatic fashion. Martina Carraro broke 1:06 for the first time ever in the 100 breast, winning the event in a 1:05.86 to become the first Italian woman under 1:06 in history.

The already-qualified Benedetta Pilato, and a third top sprint breaststroker, Arianna Castiglioni, tied for second at 1:06.00. It was the fastest race in Italian breaststroke history, as all three women broke Pilato’s former national record of 1:06.02 from December. The 16-year-old Pilato, meanwhile, set a new Italian junior record with her 1:06.00.

The race was really between Carraro and Castiglioni for the other spot on the Olympic roster in the 100 breast, as Pilato had one spot, and neither Carraro nor Castiglioni went for the 200 breast. All three women now sit in the top-five on the globe this season. Carraro won the bronze in this race at 2019 Worlds, but all three would’ve won bronze with their times today.

“It was a very difficult day, I was very tense,” said Carraro after the race. “I am really happy–a time like this is remarkable; I am very proud of the work we are doing. This morning I was amazed by the time trial swam by Arianna Castiglioni, but I did not get distracted and I remained focused on my potential. I didn’t want to miss this opportunity. I did it.”

The Italian Olympic cuts are pretty steep, and faster than FINA ‘A’ cuts, which many countries use to select their rosters. So it was exciting for Team Italy (and heartbreaking for Castiglioni, certainly) to have three women clear the Olympic standard in an event. Not only that, but they all went almost an entire second under it, an impressive feat in a sprint event, especially in contrast to some events where the top finisher doesn’t even come close to qualifying.

Meanwhile, Federica Pellegrini confirmed her place on the Tokyo roster in the 200 free tonight with a 1:56.69, getting under the Olympic cut.

“Sorry for the tears, but it hasn’t been easy months,” said Pellegrini. “I am happy with everything. I am in line with the other Italian championships, in line with my work program. Now I can breathe much better. I have reached the fifth Olympics, and I feel like crying again.”

The other highlight came in a non-Olympic event, the 50 breast, where Nicolo Martinenghi went 26.39 to break the Italian record he had set in prelims at 26.47. With his swims today, and his big 100 breast yesterday, he’s broken Italian records three times in the last two days.

Can someone explain why Pilato was pre selected?

This season italian swimming federation decided to do the same thing with the same QT, so when at italian Championship in december 2020 Pilato and Ceccon swam under the Olympic QT they were added to the team.