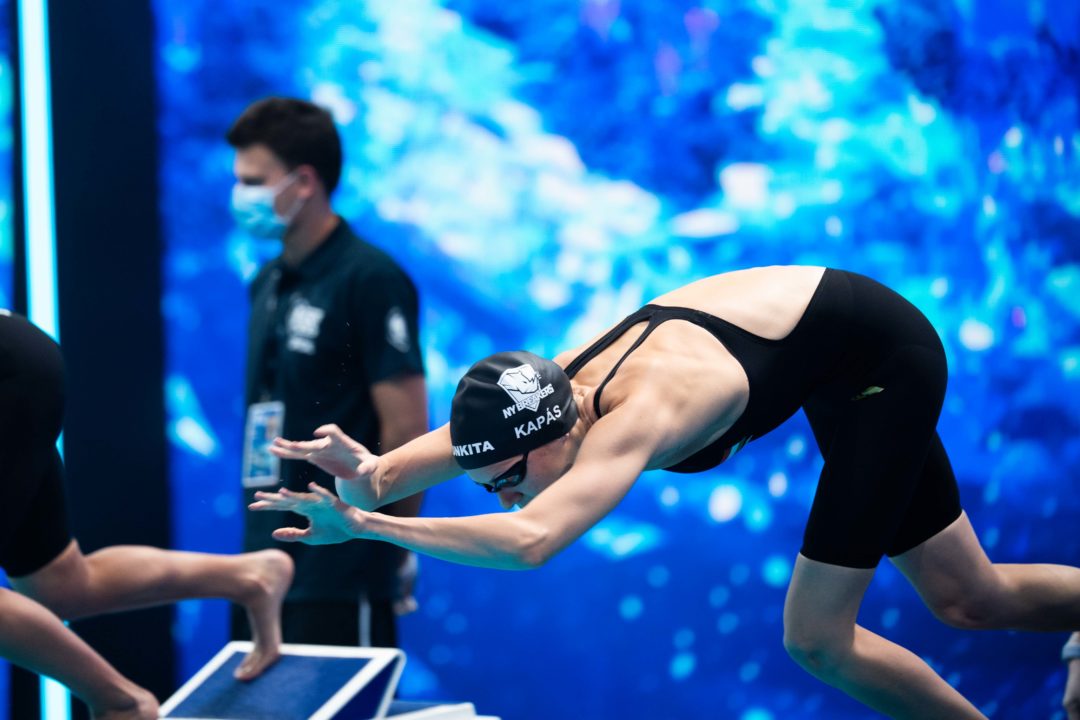 Head Coach Matt Truijens will replace Tina Andrew as General Manager of the NY Breakers. They are the only team in the ISL to have the same head coach and GM. Archive photo via Mike Lewis/Ola Vista Photography

The New York Breakers’ team page has been updated to name head coach Martin Truijens as the team’s General Manager for season 3 of the ISL. Tina Andrew held the position for the team’s first two seasons. This will be Truijens’ second season as head coach, taking over for Peter Andrew after season 1. The Breakers are the only team in the ISL to have the same GM and head coach.

Truijens was the face of the team during the season 3 draft, which began today. Most teams, with the exception of Dave Salo for Tokyo, were represented by their GM. Toronto had GM Robert Kent and head coach Byron MacDonald both on their screen.

The Breakers’ official league page shows Truikens as GM, in addition to his role as head coach, which was confirmed by team sources. The Breakers retained 15 swimmers and welcomed one rookie – Matt Temple – to the team. They shared their day 1 picks in an Instagram post:

The team also announced that 2020 top point-scorer and team captain Michael Andrew will not return for the league’s third season. Andrew was expected to be an ISL favorite after his performances at the 2021 U.S. Olympic Trials, where he won the 100 breast and 200 IM and was runner-up in the 50 free. He was also the Breakers’ top point-scorer last season. Andrew did not comment on why he will not be swimming in the 2021 league.

Michael, Tina, and Peter are still involved in the team’s ownership group.

Well, you had to do New York which gets less elite swimmers out of that state than Florida does. Think Caleb Dressel and Ryan Lochte. Maybe, because Miami is less famous as a city than New York. I would have picked the Miami breakers. Personality, I thought this might happen given that Michael doesn’t want to do this.

it seems like they don’t want to follow the covid protocols, so they are out. Let’s not forget that foreign countries will not welcome unvaccinated travelers for quite a long time (Olympics are a special/different case)

They followed protocols fine last season. When I spoke to them at the time, while they had their beliefs about what was necessary, they never once said “we’re going to refuse to follow this protocol.”

(Also, the protocols were generally not only followed at a mediocre level last season, as was evidenced by social media posts from several athletes).

From our sources within the team and the league, nobody believes that this has anything to do with COVID. I understand that their views on COVID are controversial, but that doesn’t mean that this withdrawal is related.

Can we stop labeling someone anti vax because they don’t want a specific vax? I avoid Advil due to stomach problems, it doesn’t mean I’m anti medicine. We don’t yet know of the side effects of the covid vax (you scientifically cannot know any long term effects, it hasn’t been around long enough). With recent additions of side effects from FDA including heart inflammation, I think we should cut Andrew some slack. Why would he need it anyways?

His family is Anti-Vax not just Covid.

He openly stated in his interview with Brett Hawke that his family are conspiracy theorists. During the early lockdown in CA, his mom and sister posted instagram videos from “liberty protests” and took selfies at massive, unmasked indoor church gatherings. Just very little care for others during the worst stages of a global pandemic.

I wonder if he is ever allowed to move out on his own.

Michael has not lived with his parents for a while now.

Yeah but they probably implanted a mind control chip in his brain. Peter stands by the side of the pool with remote control adjusting Michaels speed during a race…..how else would you explain his weird splitting of races

‘The worst stages of the global pandemic’ = absolutely the worst when it is in our backyard but we don’t allow Japan to feel that way .They have to take us all in vaccinated or not .

Side effect os Vaccine: Sore arms for a few hours, death at old age.. how terrible
Side effect of covid: Death, Neurological problems, diabetes and others..

Perhaps the Breakers will now have a chance…

LOL did you watch day 1 of the draft? The Breakers are clearly now the worst team in the league. And it’s not even close.

Loud and proud too! Willing to throw away the Olympic dream by leaving the possibility of catching Covid open.

He already had it…

I just realised Temple withheld himself from the Breakers’ protected list and still ended up there.

That’s the great part about being a pet project funded entirely by a billionaire oligarch. You don’t have to make anything

Victor Orban has also been very helpful. Plenty here dislike our Unwoke Victor but were happy to have him gift the 2020 season .