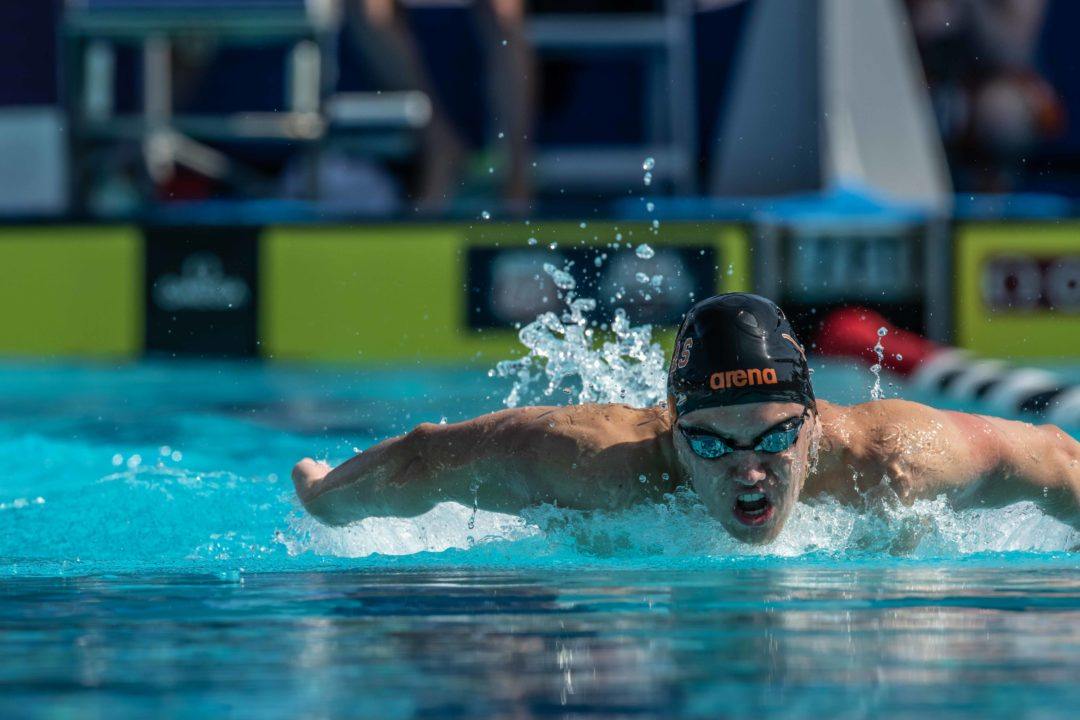 The most interesting race of the day was final of the men's 200 fly, where three swimmers, Andrew Koustik, Sam Pomajevich, and Daniil Antipov, were vying for times fast enough to earn them a ticket to the NCAAs. Current photo via Mike Lewis/Ola Vista Photography

The American Short Course Championships has included a  high-level club meet in previous years, but this year it appears to be more than anything a last chance meet for men’s NCAA swimmers. The only teams with swimmers competing at the meet this year are BYU, Grand Canyon, Texas A&M, Texas, Yale, and Longhorn Aquatics, totaling around 45 swimmers entered in the meet.

The most interesting race of the day was finals of the men’s 200 fly, where three swimmers, Andrew Koustik, Sam Pomajevich, and Daniil Antipov, were vying for times fast enough to earn them a ticket to the NCAAs. Prior to this weekend, Pomajevich was leading this trio in the national rankings, sitting in a tie for 27th in the NCAA this year. Approximately 29 swimmers are invited to men’s NCAAs in each event. Koustik dropped just .07 seconds off his season best to win the event, swimming a 1:42.32. The interesting thing about that is his time was .01 seconds faster than Pomajevich’s season best, bringing Koustik up to 27th in the national rankings, and dropping Pomajevich (who swam a 1:42.84 tonight) to a tie for 28th. The situation gets cloudier for the two Texas teammates, who do still have a slim chance of earning an invite to the NCAAs. With the Pac-12 left to swim the 200 fly, it’s unlikely either will still be in the top 29, however, if some swimmers who would be invited opt not to swim the 200 fly at NCAAs, it could bump Koustik or both of them in. Right now, it looks like there are two swimmers ahead of them in the rankings that may not swim the 200 fly at NCAAs: Andrew Seliskar and Maxime Rooney. Although, it’s unclear right now whether either of those two are even unlikely to swim the 200 fly at NCAAs.  Antipov was the runner-up tonight, swimming a 1:42.75. Antipov’s season best is 1:42.35, which is highly unlikely to earn him an invitation.

Pomajevich scored 24 points for Texas at last year’s NCAAs, and not having him on the roster this year would be a hit to the 4-time defending national champions. He could still enter the 500 tomorrow and try his luck there, as he was bumped to 32nd in the NCAA in that event after Pac-12s tonight.

Madisyn Cox, one of the two non-NCAA athletes at the meet, posted a quick 1:54.44 to win the women’s 200 IM. She was also the only swimmer in the women’s 200 IM. Her personal best is 1:52.58, but for a meet she likely isn’t anywhere near peaked for, it was a solid performance. Mark Theall of Texas A&M made the other notable performance from an NCAA last chance perspective. Theall won the men’s 200 free with a 1:33.68. The time was a season best, and brings him up to 25th in the NCAA rankings this season. It will be close, but that swim should be enough to earn him an invite.

Way to go Mark Theall!! Hoping to see you in NCAA meet!!

Those guys are really bunched together and there are 4-5 pac12 guys sittin right around 143. Three guys time trialed it last night at pac12s and I think the fastest was a 143 high from Matthias Oh from Arizona.

Not a season best for antipov, according to collegeswimming.com he was 1:42.35 at the Hawkeye invitational