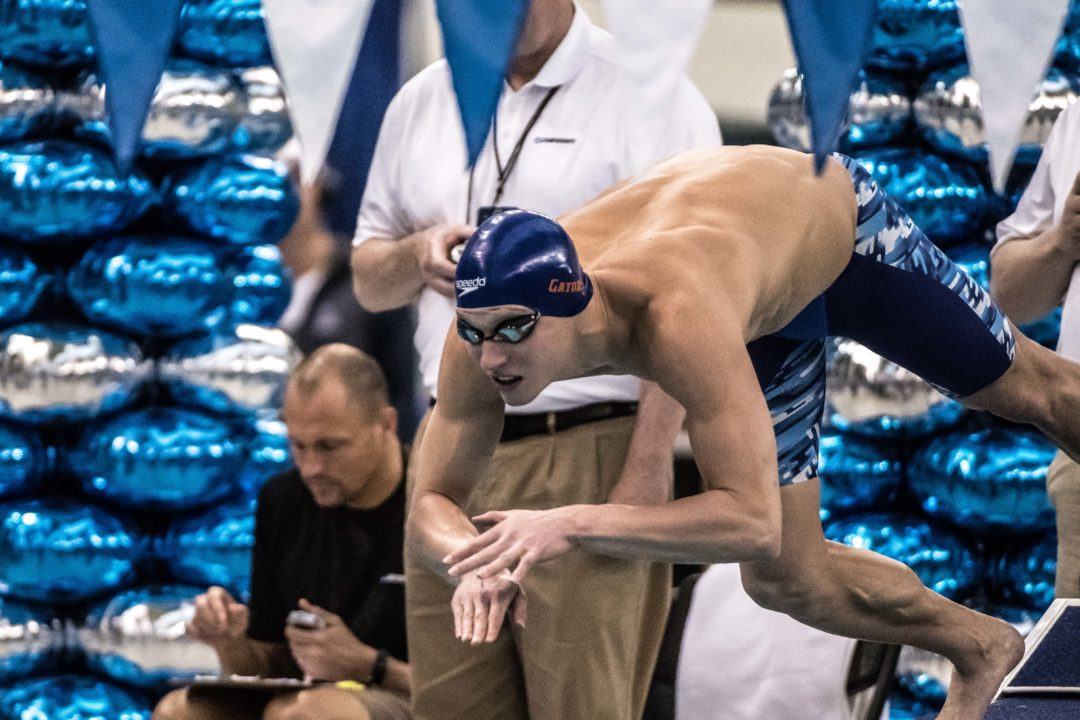 22-year-old Scottish swimmer Mark Szaranek is used to training among inspiring, elite teammates, having completed a stellar career at the University of Florida. Surrounded by storied coach Gregg Troy, multiple world champion Caeleb Dressel and other key supporters, Szaranek has seen his swimming game step up to the big leagues. Now, with American Ryan Lochte returning to his original Florida home training base after several years away, Szaranek is reaping the benefits of racing alongside a swimming icon every day at practice.

“Ryan’s a good guy – I think he’s been pretty misrepresented in the US media to be honest because he’s great,” Szaranek told The Herald Scotland recently. “Having someone like him alongside you every day is amazing. He’s literally the best IM swimmer ever so to train with him is pretty incredible. And I can compete with him in practice so that gives me so much belief that I can compete with anyone in the world.”

Szaranek continued, “So when I get to the major meets, it’s not like I’m up against something I’ve never seen before, which is really helpful.”

After winning an NCAA championship title in the men’s 200 IM in 2017, Szaranek returned with a 2018 NCAA national title as part of the Gators’ 200 free relay, in addition to multiple top 5 finishes. Amid his yards career, the Kirkcaldy, Scotland native kept grinding out impressive performances in the meters arena as well, claiming two runner-up finishes at the 2017 British National Championships that led to a 200m IM and 400m IM berth at that year’s World Championships in Budapest.

Continuing to grow his impact on the international swimming stage, Szaranek earned a silver medal at the 2018 Commonwealth Games in the men’s 400m IM, falling just .60 of gold. He also claimed bronze as a member of Scotland’s 4x200m freestyle relay. However, after training with Lochte day in, day out, Szaranek  is no friend to 2nd place.

On his performance on the Gold Coast, Szaranek told The Herald Scotland, “The plan was always to go for gold but silver is a decent consolation prize.

“Next time I’ll be looking for the win though. There is a touch of disappointment but I’m really happy to have come away with something. To have swum a 2 second personal best is really good – but you’re always looking for more.

“This has built my confidence and let me know that I can compete at that level. I always believed that I could do that but to go out to Gold Coast and actually execute it is another thing and so I’m really happy that I was able to do that. So hopefully I can take that knowledge and experience forward and use it to my benefit.”

Szaranek will have his chance to shine once again at the 2018 European Championships and he’ll get to do so on his home turf. Taking place in Glasgow August 12th-20th, the European Championships will be an opportunity for Szaranek to improve on his 400m IM performance in Australia and give GBR a medal in the event, something it hasn’t captured since the 2014 edition of the international event.

“To have a home Europeans coming up is really exciting,” said Szaranek.

“And I’m feeling confident. I believe I can go in there and swim best times again – I don’t see any reason why I wouldn’t be able to do that. And if I am able to do that, I’m confident that I’ll put myself right in the mix for medals.”

Lochte , Dressel, Szaranek, Jan, Rooney are all going big this summer, you know they will have all wanted to smash Lochte and now he’s fit bet Greg is loving it and everyone has raised there game.
Szaranek 4.11.8-4.12.2 this summer

Does anyone know whether Szaranek still be able to train at Florida after graduation or will his visa be tied to being a student?

Togger – I don’t know the details of his specific situation, but it’s not hard for elite athletes to get visas, or even green cards, to train in the US.

But it’s getting harder…

Model elite athletes with no criminal record do not nor will they ever have trouble abtaining visas or green cards in the US for training. It’s not getting harder.

Marwan El-Kamash didn’t get his visa renewed. I think it’s fair to predict that athletes from some countries will have more trouble the next few years. Sad!

I would be careful taking one case as a sign that it’s suddenly become hard. Maybe it has. But, we don’t know what Marwan did and didn’t try to stay. We don’t know if he had a good attorney. We don’t know why his visa was denied. If we start to see this happening to more swimmers, then we can draw some conclusions.

Well Marwan is worse than Szaranek too

The standard for “elite athlete’ is surprisingly soft when it comes to visa matters.

Thank you, I think it’ll be good for him to stay out there.

Just wondered as I know professional athletes here are finding it more difficult to move over for work.

“Literally the best IM swimmer ever”!! Hot take from Mark.

I can see the argument, but I’m counting 6 gold medals from phelps and 1 from lochte. Top 10 all time 200 is 6-4 in favor of phelps, with locthe having the top two, and 400 is 3-3 with phelps on the top with a staggering 4:03.8. It’s close but the olympic gold medal disparity is too much for me to give lochte the edge in the “best IM swimmer ever” debate.

It’s a valid debate in my opinion. No question that MP is more accomplished in the IM events when you count the medals in meets where they competed against each other. In terms of times and performance, that’s where things get interesting. Yes, MP swam 4:03 in 400IM but that was in a super suit. Lochte swam 4:05 in 400IM in a legal suit and had no competition on the free leg. So it’s hard to figure out which performance is better. I’m willing to bet Lochte’s was better since the super suits improve endurance due to keeping muscles compressed, which likely helped MP finish strong. Lochte has the 200IM WR but MP has beaten him more. I’ll leave it… Read more »

Phelps only wore a legskin, and I still feel pretty strongly that 08′ Phelps and 12′ Lochte going head to head the last 100 leaves Phelps in the lead, as he really didn’t have any competition himself on that last leg. And 07′ Phelps having that event first breaks 4:05 in my opinion.

Can’t argue with all those WC titles and WR in 200 IM. Olympics 200 IM though favors MP.

Including all international longcourse IM titles the gold count is still 11-7 in favor of phelps, and a few of lochte’s were when phelps was either “retired” or competing in off events (2005). Shouldn’t count against lochte that he was competing when michael wasn’t just worth noting that its not like he was beating phelps in most of those, where almost all of phelps’s golds had lochte in the field

Lochte swam the fastest ,,,,,,thats it !! No arguments necessary ….and He has the fastest 400IM without suit . Period

Ok everyone will argue Phelps and 200IM at Olympic the 4 peat, but mark was referring to IM in general.
Short / long and consistency, mixed in with Lochte can beat Phelps in short course and 200IM world record only leaves 4.03.8 v 4.05.1. IMO Lochte could have gone 4.04.5 if not glider and in suit would of been 4.02.
Longevity of been in the top medley swimmers in the world is Lochte.
Olympic achievements- Phelps
Greatest IM swimmer – Lochte

I would just go with one of the most thrilling rivalries ever. No need to rank them. Where would you guys put Tamás Darnyi then? Unbeaten for 8 years in both IMs from the age of 17 to retirement. 4.12.3 in ’91 in a speedo, without a cap, with no competition whatsoever.
Let’s all hope that Phelps comes back for Tokio for a final showdown 🙂

Well Phelps has more world and Olympic titles so while it’s impressive when you lost lochte’s, you should list phelps’ too (I don’t count SCM for this since phelps never took it seriously and barely ever raced it).

And while we talk about longevity, phelps’s first world title in 200 IM was in 2003, befor lochte I think had even made a major team yet, and he smoked lochte in 2016, leaving the entire field in the dust. So I don’t understand how you give lochte the edge or even close to it in longevity

The only one of those World Champ IM Golds where Lochte beat Phelps was 2011. Lochte was good, but Phelps was better and lasted longer.

He swam the fastest time in the 200 IM ( WITHOUT FAST SUIT ) and the fastest 400 IM without rubber suit . No need to emphasize with ego-type arguments .

I just don’t see the argument for the guy that is 1-5 against Phelps at the Olympics in IMs as being the greatest IM swimmer of all time. 4 world titles in 200IM in a row is remarkable, but only one of those was against MP, due to not swimming IMs in 2009, and not racing at Worlds at all in 2013 and 2015. Lochte’s beaten him head to head twice in major international competition – Shanghai 2011 in 200IM when he set the WR, and London 2012 when Phelps inexplicably swam the 400IM after rarely competing in it for the past 4 years. This is Phelps’ crown, no contest.