Margo, Missy, and Marchand Among the Best Stories in Wednesday’s Invites 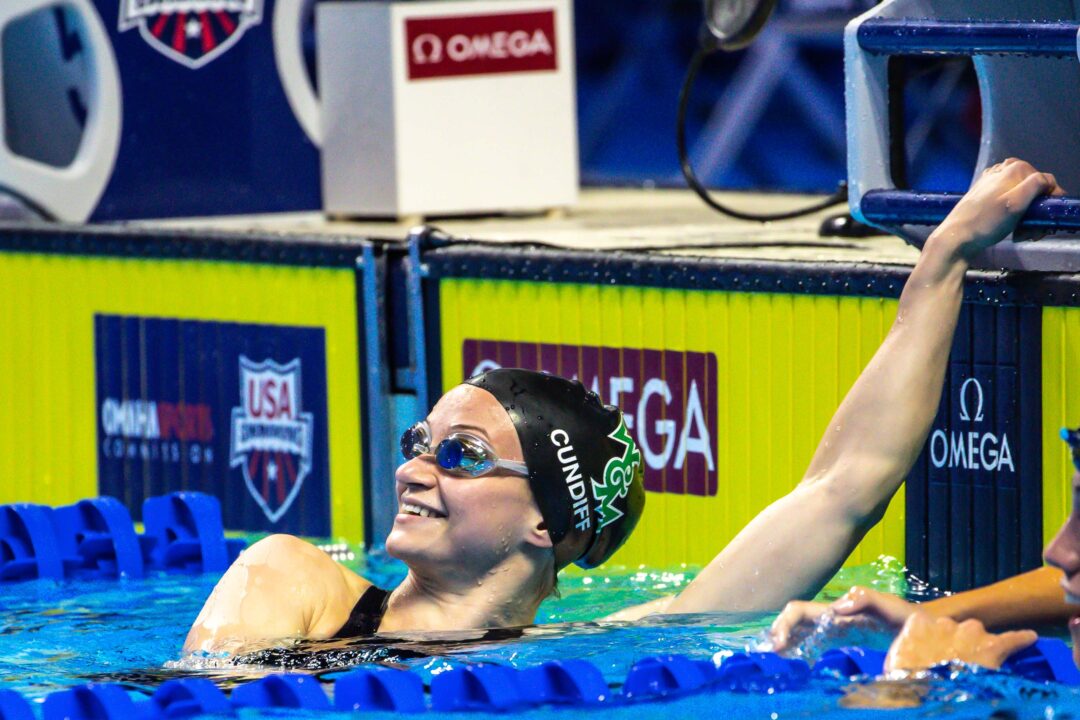 Mid-season NCAA Division I mid-season invites are off to an electric start across the country, demonstrating that even in the rise of ISL, collegiate swimming still captures the hearts of American swim fans, at least.

There were a lot of big stories through the first two days of racing across the country, and to sum them all up at the same time would be nearly impossible. But these are the ones that really stood out to me.

One of the big topics of the offseason in collegiate swimming was how Margo Geer would handle her first full-time head coaching job at Alabama, taking over for her former personal coach Coley Stickels.

If her team’s first suited big-meet final was any indication, she’s going to carry the torch well. The women’s sprint group, which was her specialty as a swimmer and Stickels’ specialty as a coach, was huge in the opening 200 free relay in Tennessee. They swam 1:26.38 to crush their own school record of 1:27.02 set last season at the SEC Championships. That time would have placed 4th at last year’s NCAA Championship meet (where the actual Alabama relay was 6th).

The time was fast, but the emotion of the win might have been even bigger: they knocked off Virginia, albeit a Virginia without their freshman star Gretchen Walsh.

Kensey McMahon won the 500 free in the next women’s race in 4:38.76, missing her best time by just a tenth and holding on to win a crazy-competitive race, and later Morgan Scott won the 50 free in 21.80. The Alabama women’s 400 medley relay also broke a school record. Olympian Rhyan White was almost a lifetime best in the 100 back (on a relay leadoff). Derek Maas won the 200 IM in 1:43.49, which is a best time by a second-and-a-half and a third school record for the Tide, and the Alabama men’s 400 medley relay dominated the field, by almost four seconds, in an NCAA “A” cut of 3:04.36.

We can neither declare a coaching career a success nor a failure after a semester. She’s coaching swimmers that someone else recruited, and has the support of bringing back Ozzie Quevedo, one of the best assistant coaches in the country, to help with the handoff and continuity.

But at a minimum, Alabama’s results in one day at this meet are enough to earn her some patience from Alabama fans, to see if she can continue to build the program and sustain this very, very early success, and they’re probably enough to make recruiting conversations easier if questioned about her lack of coaching experience.

In that same 200 free relay that Alabama won, the fastest leadoff leg was a 21.27 from Virginia junior Kate Douglass. For the defending NCAA Champion in the event, that’s already faster than she was mid-season in the event last year (21.42).

Virginia played with their lineup a little bit, swapping Douglass into the 200 IM and Alex Walsh into the 50 free, individually on day 1. With no individual 50 free swim for Douglass, that leadoff leg could have gone overlooked (though her 1:52.21 in the 200 IM was also a show-stopper).

It’s just one more reminder about how ridiculously versatile the big names for the defending NCAA Champions from Virginia are.

Leon Marchand Lives Up to Billing

Just a few months into his transition from France to the American collegiate system, and short course yards swimming, Arizona State’s Leon Marchand is living up to his hype.

The possibilities of Marchand, one of the best young IMers in the world, training under Bob Bowman, architect of the best IMer in history Michael Phelps, were always clear.

But Marchand, even in his second-best event, did something special. He’s now the third-fastest freshman 200 IMer in NCAA history, behind only Destin Lasco last season at Cal (1:40.01) and Hugo Gonzalez in 2018 in his first year at Auburn before transferring to Cal (1:40.67).

And, again, that’s with just a few months since having first swum in a short course yards pool.

Carson Foster at Texas last season swam the best-ever freshman 400 IM in 3:35.27, followed by Gonzalez in 3:35.76 and Chase Kalisz in 3:38.05. It seems almost a given that he’ll beat Kalisz’ time, and certainly plausible that he could dip into the 3:35 range, given his relative long course strength in that event.

The Feel Good Story of the Night

Last year, William & Mary’s administration cut their men’s and women’s swimming & diving programs: a pair of programs that did about as much, with as few resources, as any mid-major team in the country.

It’s going to take time for the Tribe to rebuild to the level where they were, but the team’s star, Missy Cundiff, showed that even with so many swimmers lost, their cupboards are not bare.

The 5’4″ Cundiff swam a 21.98 in the 50 free at the West Virginia invite to win by over a second. Besides being a school and CAA conference record, that is the 4th-best time ever swum by a woman from outside of the ‘Power 5’ conferences.

Poetically, going into COVID-19 lockdowns, Colin Wright swam 18.98, which made him the 4th mid-major swimmer ever under 19 seconds in the 50 free.

Cundiff was an important piece of the effort to save the program – we first learned about her when she made a rap video to save the team that went viral and brought lots of attention to the issue.

Cundiff had a big summer as well. She won the 50 free at Wave I of the US Olympic Trials in 25.46, though she declined her spot at the Wave II meet to begin an internship.

This is just a feel-good story that I think returns some hope that it’s worth fighting to save college swimming programs, even mid-major programs, even if they have to take a year off.

Thanks for a really nice story Braden. Especially think you captured the satisfaction of Margo Geer’s early success at Alabama.

Coley brought in the majority of that entire team. Let’s be honest here. Cora, Morgan, Markum and the other transfers, foreigners, and the current freshman were all his. None of those people would have looked at Bama w out him. So knock him all you want but he assembled that team and got rid of what he needed to over the course of 2 years and was trashed incessantly on this site for it. He handed Margo a great team on a silver platter while Ozzie and company coach those scoring most of the points.

Don’t confuse yourself. All of those incredible senior women (except Scott) were recruited by Pursley (Antoniou, McMahon, White, Liberto, Wright). The top men on the roster were also recruited by Pursley (Menke, Maas, Berneburg, & Perera). Margo also went out and got Alves & Kahl to join this team in the spring/summer.

Coley brought in some great pieces (but some of those have left), but to imply that he’s responsible for these swims is ridiculous. The man hasn’t coached this team since last December. Give credit where it’s due

It turns out that probably all three head coaches, as well as the many assistants, get some say in those swimmers who swam under all three of them. It doesn’t have to be an all-or-nothing situation.

Margo has surrounded herself by a group of hard working, passionate coaches. She is dedicated and has learned an immense amount in a short period of time. They have made extra efforts to make sure that every need is attended to. These are incredible feats. The sky is the limit.

ASU had a great showing tonight, with Marchand and Nordin going super fast and a lot of other very good swims across the board. Hopefully they can hold this form into championship season. Things might be looking up for the pros training there too.

I see a lot of potential in derek maas, won’t be surprised to see a 50. or maybe 49 at NCAAs with those mid season times