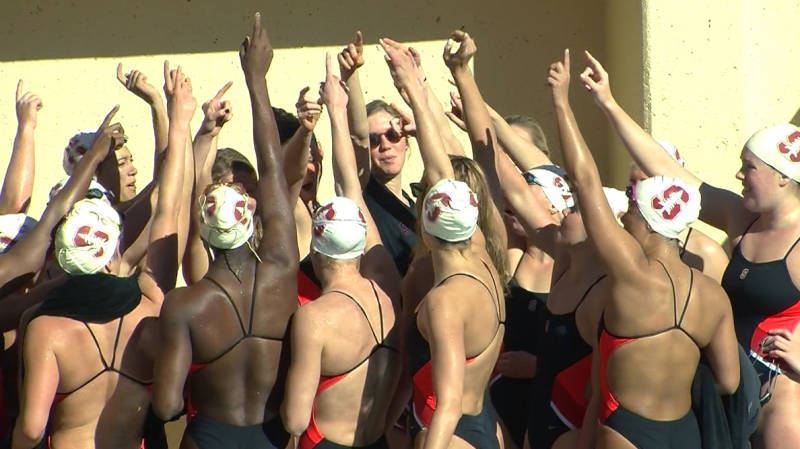 The #2 Stanford women dominated #14 USC on the Cardinal’s senior day, as they won every swimming event but the 500 free until the remaining two events, in which Stanford swum in exhibition. Simone Manuel and company swam very well, showing no signs of disarray after elite sprinter Maddy Schaefer left the team, as they won with a final score of 182-110.

Freshman standout Manuel led Stanford 1-2-3 finishes in the 50 and 200 freestyle. She touched at 1:44.34 to absolutely crush the competition in the 200 free, as Grace Carlson finished 2nd in 1:48.73 and Alexandra Meyers was third in 1:50.18. To put Manuel’s insane dual meet swim in perspective, she was merely four hundredths from hitting the time that would have made the A final at last year’s NCAA Champs. Manuel was back in the 50 free, swimming to a 22.24 victory, and was followed by Lia Neal (22.97) and Julia Ama (23.15).

The Cardinal’s breaststroke trifecta of Katie Olsen, Sarah Haase, and freshman Heidi Poppe put on a clinic, finishing 1-2-3, respectively, in both the 100 and 200 breaststrokes. Olsen and Haase both got under the 1:01 barrier in the 100, with Olsen winning it in 1:00.66 and Haase touching at 1:00.81, followed by Poppe in 1:01.42. Olsen later owned the 200 version of that race, with a 2:12.58 to take the event. Haase finished in 2:13.40 followed by a 2:15.39 from Poppe. While Olsen might have the edge as the favorite for the medley relays, Haase and Poppe will be big in the individual 100 and 200 breaststrokes to try to make up for some significant point deficits following the loss of Schaefer in the sprint freestyles.

The Trojans, coming off of a tough loss against #3 Cal yesterday, put together some gutsy swims of their own. Their sole win, before Stanford started swimming in exhibition, came from sophomore Chelsea Chenault, who clocked an impressive 4:47.53 to take down Manuel, who led at the 250 mark but fell to  a finish of 4:49.86 for 2nd.

Haley Ishimatsu came through for the Trojans again, winning both 1 and 3 meter diving after sweeping those events against Cal yesterday. Stanford dominated the rest of the meet, though, with Allison Brown taking the 1000 (10:07.68) and Neal winning the 100 free (49.26). The Stanford A 200 medley relay cracked 1:40, touching at 1:39.65 for the win, and they would have won in the 400 IM and 200 free relay had they not swum them in exhibition.

The Stanford women will travel to Berkeley to take on Bay Area rivals Cal on February 14th for their final dual meet of the season. This should be a hugely impactful meet before the teams meet again at Pac-12s and NCAAs, as they will be vying for a conference title as well as a national title if Georgia slips at the big meet.

Stanford ‘s three breaststrokers all have good scoring potential at NCAAs. Stanford and Cal are both going to have a difficult time deciding who will swim the breaststroke legs on their medley relays.

Yes, but not for the same reasons. 🙂

I was able to drive on over yesterday to watch in person for the first time this 3X 6′, monster-muscular Stanford breaststroking crew. It’s really scary how good these three girls really are and to see them finally swim in person and dismantle their competition in concert was really fun. It was like a breastroke tsunami, definitely the most overlooked and underrated aspect about this extremely talented team. Katie Olsen, Sarah Hasse and Heidi Poppe are three names to watch for at this year’s NCAAs for sure; any one of them could go off in a huge way if not all three in tandem.

Simone Manuel not rested and not suited with 1.44.34 in the 200 free and 22.24 in the 50 free.
That’s impressive.
I think she wants absolutely in the coming weeks attack the 50 free American and NCAA record and take back the 100 free American record.
It will not be easy. The 50 free record has been made in magical suits by Lara Jackson and Abbey Weitzeil has put the 100 free record at a very high level last December. And Simone will have to swim a lot of races at NCAAs with the 200 free and the relays besides so she will not be the freshest possible, as sprint requires it, especially on day 3.
… Read more »

Totally agree. Simone Manuel is such an amazing talent. Her 200 Fr looked absolutely effortless. The fact that she was thrust into the 500Fr and actually held her own against an extremely talented Chelsea Chenault was very impressive. I also loved how Grace Carlson has really stepped it up this year, especially w/ the sudden departure of Maddy; 1:48 2FR and 1:57 2BK, both for 2nd place, awesome!; great job Grace!

I’m so excited for the Cal showdown in 2 weeks, I’m a neutral fan (having family at both schools), I love and respect both these teams and coaches.