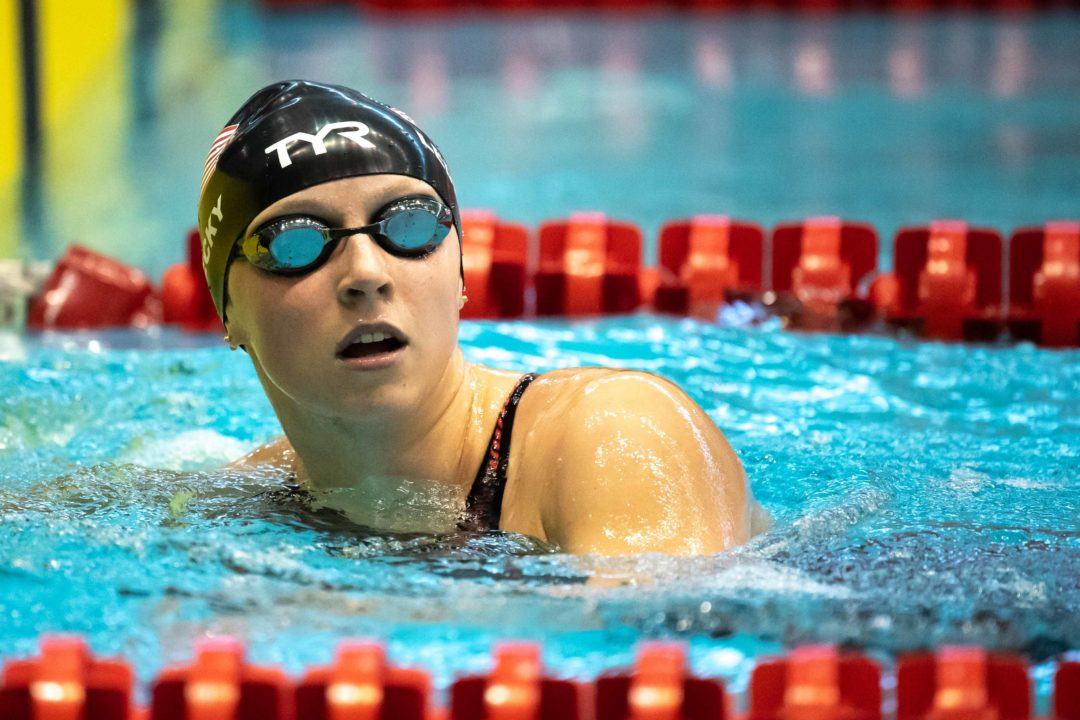 Katie Ledecky made her first appearance at the Santa Clara International this morning, putting up the top time in the women's 400 free (4:02.44). Archive photo via Mike Lewis/Ola Vista Photography

Reigning Olympic champions Simone Manuel and Katie Ledecky were both in action this morning at the Santa Clara International meet, both claiming the top seed in the women’s 50 and 400 free respectively.

Manuel threw down a season-best in the 100 free during the heats on Friday before scratching the final, while this was Ledecky’s first swim of the competition as Stanford students are currently midway through their finals.

Abbey Weitzeil, who won the 100 free last night after Manuel scratched, qualified second for the final in a time of 25.28, and her Cal teammate Katie McLaughlin was third in 25.35 (0.16 off her lifetime best).

Yozhik is my favorite poster. Sometimes comes with super insightful thoughts with interesting statistics, other times makes it seem like he doesn’t know how competitive swimming works. I think it’s incredibly entertaining and I’m looking forward to more posts!!!

Should I knew how it works I would never be here. Obtaining new knowledge – what can give more satisfaction. And I don’t afraid to go wrong way sometimes because I know there always be some nice people like OL’ LONGHORN who are ready 24/7 to show me right direction. 😀
Hearing warm words is always a great pleasure. But please don’t flatter me again because there is a danger that I begin to believe that that is true.

I concur. At the very least Yozhik knows numbers and quite insightful with analyses. He’s much better than that insufferable Bobo Gigi ugh

26.4 for Abbey in fly after 25.2 in free… For a girl who’s 24.2 at her best in free, is a 25 mid 50 fly something she’s capable of? I know the young 14 year old is coming up on 25 high for that event, but right now is Kelsi the only 25s American 50 flyer? Not sure it will have any impact on Olympics but for Abbey to have an elite 50 fly could help her in a professional sense for euro prize money meets or ISL, etc.

400FR – 200FR – 200IM
That is Ledecky’s program at this meet. What is that? An attempt to complete with 3:58 and 1:54 the unfinished business in Bloomington? Just making Titmus a little bit nervous before trials? Or this meet is a required duty she had to perform as a professional swimmer? We will have an answer soon.

Stanford has finals this week, the first of which were yesterday. Don’t read too far into this meet homie.

Can you please, show my happy emotions, since Katie was only two tenths of a second shorter of my prediction.
Ple-e-e-e as. You are so good with that.

Dude, chill. She’s a student at Stanford (who are in finals week) as well. She’s going to crush Titmus at Worlds

I faintly remember finals. I can’t fathom trying to swim a meet in the middle of that. I seem to remember too many all-nighters and a lot of stress/fatigue/insanity. I expect Katie’s got her poop in a group better than I did…

Srelax . She is majoring in Pol Sci .

Rumour has it Ledecky said she’ll smash titmus like a guitar at worlds.

Lol. I think it will be close actually this year .

It’s the best swimmer in the world getting some racing in at a small-time meet in her back yard.

Small-time meet? Santa Clara International meet? It’s been going well over a half century and while it may be down a bit this year (Down? Ledecky, Manuel, Eastin, Weitzel, McLaughlin, etc.), after having been left off the PSS series, if you average the quality of the meet over the half-century you will not find a non-team selection or championship meet with a better history. Not Mare Nostrum, not Sette Colli, not any.

Oh sorry I thought we were talking about the 2019 meet that’s happening this weekend. My bad.

Yes not much happening but I did take a look at the regional news. I am pleased that several 1970s murders have been recently solved with new dna tests & access to ancestry sites . . All such killers must be freaking out as relatives get the heritage bug & put their sample up .. Good times .

Move over to the Hosszu channel at Mare Nostrum.

Both ladies are on the downside…just my opinion – Time for new blood and HUNGRY athletes to become the next sensations.

Who are you talking about? You insult (“on the downside”) “both” ladies, when the article mentions about 10.