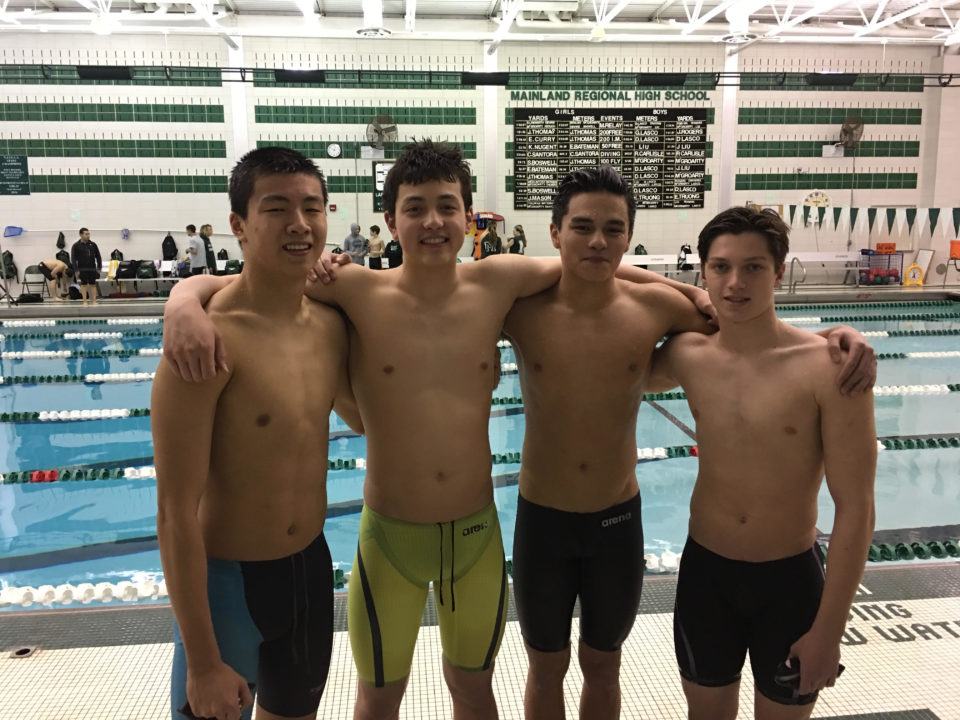 The boys from Mainland High School in New Jersey have broke the National Public High School Record in the 200...

The boys from Mainland High School in New Jersey have broke the National Public High School Record in the 200 short course meters freestyle relay for the second time this season on Monday evening. The group of Justin Liu, Glenn Lasco, Joseph Rogers, and Destin Lasco combined for a 1:34.09, which improved upon the 1:34.95 that the team set as a new benchmark in early January. The only change on the relay was swapping in Rogers for Brian McGroarty, who was on the original record-setting relay.

The new record-setting relay swam in the same order (aside from the Rogers-for-McGroarty swap) as the old record, which makes for a convenient comparison between the two. The middle legs, Glenn Lasco and Joseph Rogers, swam almost identical times as the middle legs did 5 weeks ago on Monday, with the difference in the record being the leadoff Liu in 23.19 and the anchor, star freshman Destin Lasco, in 22.78. Reaction times were not available for the meet, but those two splits are about equal when accounting for a solid relay start.

The Mainland High boys’ team has been on a National High School Record roll, taking advantage of a number of short course meters meets.

Most high school meets in the United States are swum in short course yards, though short course meters are an approved course and national records are kept in the distances.

Is that breastroke split fr?

0
-2
Reply
WaitAMinute
Reply to  that guy

This is a 200 Free relay, not 200 medley as originally reported

ok. that makes a lot more sense. i kept reading and it said medly relay and I about S*** bricks

I’m okay with seeing SCM splits. The more our swimmers do SCM the better.