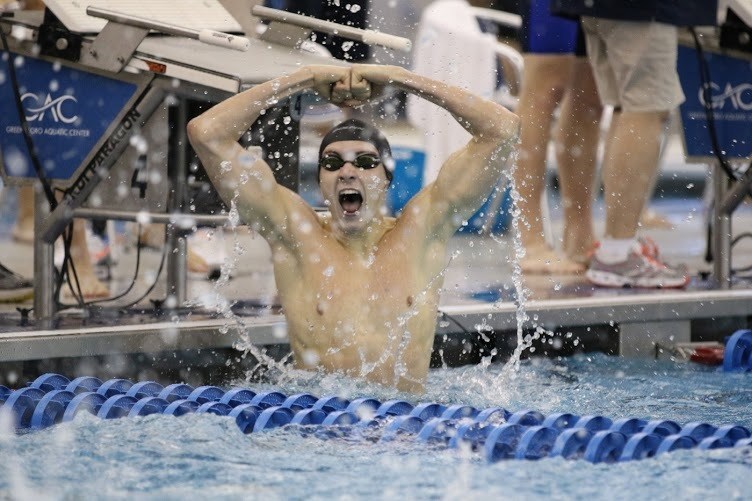 After clenching a national championship last year, the Denison University men's team beat rival Kenyon College again in their conference championships. The Denison Women's team also beat the Kenyon Ladies, who bested Denison at the 2016 NCAA Championships (though were not the champions themselves). Current photo via Denison Athletics

Long-time Division III swimming powerhouse Kenyon College has been losing ground to rivals Denison and Emory over the past several years, and this year at the North Coast Athletic Conference (NCAC) Championships, Kenyon was again bested by in-state rival Denison University.

Though Keyon is still incredible in top-level talent and depth, other Division III teams such as Denison have made up the deficit that once put them head-and-shoulders above the competition.  Kenyon might have won the previous 37 NCAA Division III National Championships on the men’s side were it not for Denison spoiling their streak with victories in 2011 and 2012, and again last year in 2016.

The Denison men got off to a great start on the first night of competition with a new NCAC record in the 800 freestyle relay.  The team of Stuart Hohm, Max Howes, Walt Dauksher, and Ryan Stevenson claimed the relay title with a time of 6:34.29, beating Keyon by over 4 seconds.  Hohm went on to place third in the 500 the following day with a 4:31.51, getting beaten out by teammate Connor Rumpit who claimed the title in a 4:29.17, and by Kenyon’s David Perez who placed second in a 4:30.56.

On the women’s side, Kenyon claimed the victory in the 800 free relay by a margin of just over three seconds.  The team of Julia Green, Kendall Vanderhoof, Sophia Kuvan, and Marysol Arce nabbed a B cut time with their 7:27.95.  The teams from Denison and DePauw, placing second and third, respectively, also slipped under the Division III B cut.  Arce followed up her relay title with a victory in the 500 the following day, touching in a 4:51472, ahead of Campbell Costly of Denison (4:53.30) and Angela Newlon of DePauw (4:54.31).  Overall, six of the eight women in the final of the 500 achieved B cut times.

The women’s 200 freestyle relay title went to Denison (Gabriella Nutter, Carolyn Kane, Casey Kirby, and KT Kustritz), who mustered a 1:34.47 to win by nearly a full second over Kenyon.  The fastest split in the field went to Denison senior Carolyn Kane who threw down a 23.00 to pull her team ahead halfway through the race. Denison also took the 200 free relay title on the men’s side, where the squad of Max Howes, Eric Gerlach, Jason Wesseling, and Zach Wagner put together a 1:21.40 to best Kenyon by nearly an entire second.  The fastest split of the race went to Denion’s Wagner who anchored with a 19.86, the only sub-20 in the field.

Fresh off the victory in the relay, Kustritz went on to win the women’s 200 IM with a B cut time of 2:04.31.  The men’s 200 IM title went to Denison’s Jack Lindell, who posted a 1:49.83.  Lindell was the 2016 NCAA champion in the 200 IM, 400 IM, and 200 backstroke. Lindell also held the NCAA Division III record in the 200 IM until it was lowered earlier this season by Emory’s Andrew Wilson, who had owned the record himself before Lindell broke it while Wilson was training for Olympic Trials at Texas.  While Wilson will still be favored for the 200 IM title at the upcoming NCAA Championships, Lindell will certainly make it interesting and challenge Wilson, and if he gets too far ahead at the 100 yard mark, he could be tough to catch.  The session closed with the 400 medley relays, both of which were won by Denison with Kenyon taking second each time.

Saturday was an interesting day of competition, if for no other reason than the opportunity to watch some of the best swimmers in Division III race the 100 IM.  Denison freshman Bebe Wang was victorious in the 100 IM with his time of 51.56, while his teammate and 100 breast champion KT Kustritz took the 100 IM title for the women in a time of 57.81, lowering the pool, NCAC, and Division III records in the event.  Denison’s Jason Wesseling upset teammate and defending Division III champion Jack Lindell to win the men’s 200 backstroke, out-touching him in 1:48.32 to 1:48.68.  Before Wesseling and Lindell fought it out for the NCAC title, Denison’s Hannah Rusinko and Erica Hsu, both freshman, also went 1-2 in the women’s 200 back, with Rusinko getting the better of Hsu by a about a second to touch in a 2:02.72 to Hsu’s 2:03.73, both of which are B cut times.  The final record of the night came from Halli Garza of Denison who won the women’s 200 fly with a 2:01.81, which lowered her own pool record and clenched her the victory by nearly five seconds.

Final team scores are as follows:

Denison swam very well and performed admirably, but it should be noted that many of Kenyon’s top performers (on both sides) weren’t scoring.

It’s not fully correct to say that Kenyon is losing ground, but maybe better to say that Denison and Emory are providing perennial challenges to the Kenyon programs that won all those consecutive titles from the 1980s to the 2000’s. In fact ONLY those three schools have won national titles since the early 80s. Both the Lords and Ladies had national title streaks until the Denison women won in 2001. That probably showed that it could be done. Since then, the Emory women are on their own streak, while the Denison men stopped the longest streak in NCAA history by winning in 2011. Since then, KC and DU men have traded titles. The Emory (my alma mater) men look to… Read more »

This comment is very accurate. Although I am a parent of a Denison swimmer, I have nothing but respect for Coach Book and the Lords and Ladies. Great staff and hard working talented athletes. The Kenyon team continues to be an important contender for this conference title and for the NCAA Div 3 title. After watching this meet last weekend, I believe that Kenyon will be in the hunt next month. NCAAs should be a great team competition.

NCAAs on the men’s side will be fantastic this year. Emory could challenge Kenyon and Denison for sure, but they will have to be perfect, particularly their non-star swimmers. Also, MIT and JHU are underrated and I think might come much closer to the afore mentioned three than many people might expect. It could shape up to be a 5-team meet of sorts, which would be awesome, especially after watching it be a two-team meet for the last 6 years, and really just a one team show for the 30 before that

It could shape up to be a 5 team meet but I think it would be more accurate to say that the meet is going be decided by NYU, MIT, JHU, Wash U, Williams, and so on as they can “take” points from the big 3 (KC, DU, EU). It is important to remember Alex Katz and Ian Rainey as they can win/contest for individual titles in their events. They are not the only ones, there are other guys scattered throughout the rankings that can take points from the superstars or give them a run for their money. Emory does have a good shot at dominating some races, especially with the fab four on the medley relays, but they lack… Read more »

I agree with your sleeper analysis, Barbara Ann. Book and Parini are smart, competitive people. My view is they both what to win conference and set themselves up for Nationals. Both will be in the hunt in Texas. Might be some surprises because of the still unknown strength of the Denison first year student-athletes.

I think Emory has the best shot they will have for a while to win the men’s title this year. Denision should pound Kenyon and Emory (if they hit their swims) can contend with Denison for that top spot.