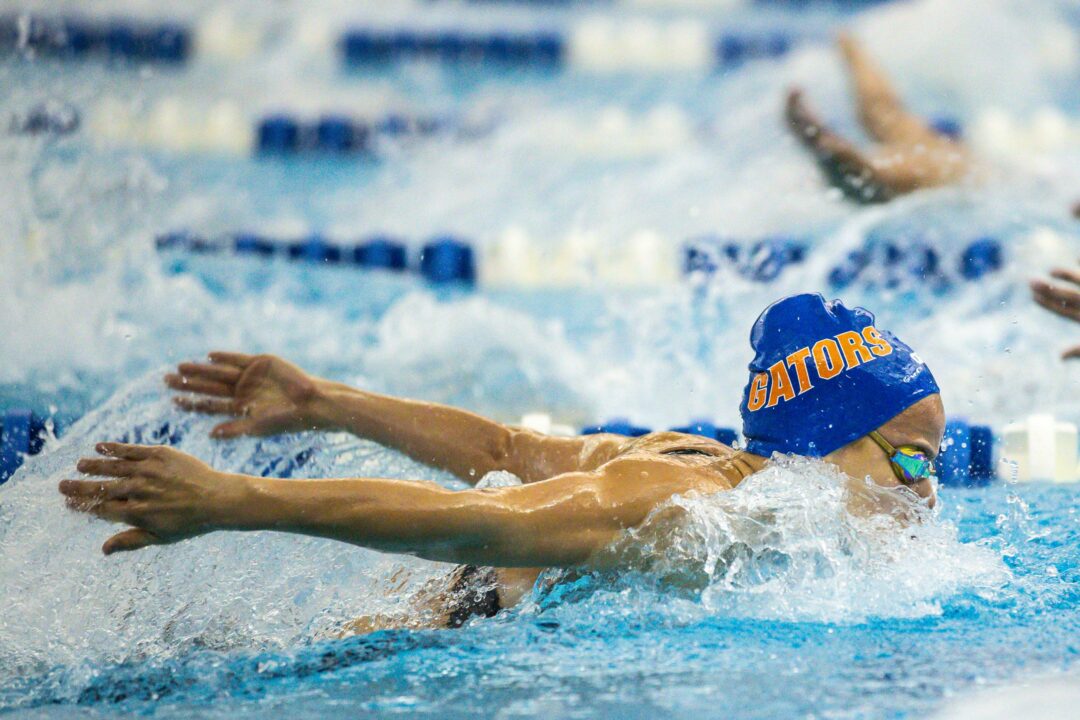 On night two of finals at the 2022 Atlanta Classic, Mabel Zavaros took on a tough 200 fly/400 free double and won both events. Archive photo via Jack Spitser/Spitser Photography

Florida Gator Mabel Zavaros won both events of her double tonight. First, she won the 200 fly in 2:12.33, a little off her time from Canadian Trials in April but over a second ahead of runner-up Izzy Gati.

After winning the 200 free on Day 1 in a personal best 1:48.31, Venezuelan Olympian Alfonso Mestre won the 400 free with another personal best. Mestre swam 3:47.95, knocking 1.21 seconds off the best he set last May at the Indianapolis Pro Swim. He finished 7.15 seconds ahead of runner-up Joaquin Vargas.

Alfonso’s older brother and fellow Olympian Alberto Mestre won the 50 free in 22.44, about half a second off his best 21.93. He won the race handily, .61 hundredths ahead of teammate Julian Smith.

Olympians Rhyan White and Kira Toussaint went head to head in the 100 back. White led the whole way, splitting 28.90/31.40 to win in 1:00.36 ahead of Toussaint’s 1:00.98. At U.S World Trials, White was 58.59 to finish third behind Regan Smith and Claire Curzan. White qualified for Worlds in the 200 back while Toussaint, who represents the Netherlands, qualified in the 50 and 100, so they won’t have a rematch next month in Budapest. Toussaint recently returned from the Netherlands to train at her alma mater, Tennessee. This is her second meet since her return to the United States.

Aidan Stoffle won the 100 back by over a second and a half, clocking a 55.00, only two hundredths off the best he set at World Trials. He had a strong sophomore season at Auburn–he was one of three scorers for the Tigers at men’s NCAAs, finishing 16th in the 100 back and swimming a best 45.36 in prelims.

Been watching Zavaros for years and I’m so happy for her. She works so hard and deserved that payoff. I think we’ll see her on the CAN Olympic team in 24. I think it’s finally her time.

Also gotta give those US colleges some cred. She started flourishing upon moving to and swimming with Florida. In fact, a few of our swimmers have. Sometimes change is for the better.

Mabel was flourishing long before Florida.

Mabel was flourishing well before Florida.

Where are the DOGS? I remember when Jack had his swimmers ready to race all day long. Swimmers have told me, since Harvey retired, the assistants aren’t doing the job and Jack can’t do everything.

Is there any commenter on this site who more consistently has bad sources than you?

Jack is fighting cancer. He wasn’t at SECs. If anything, the assistants ARE doing the job.