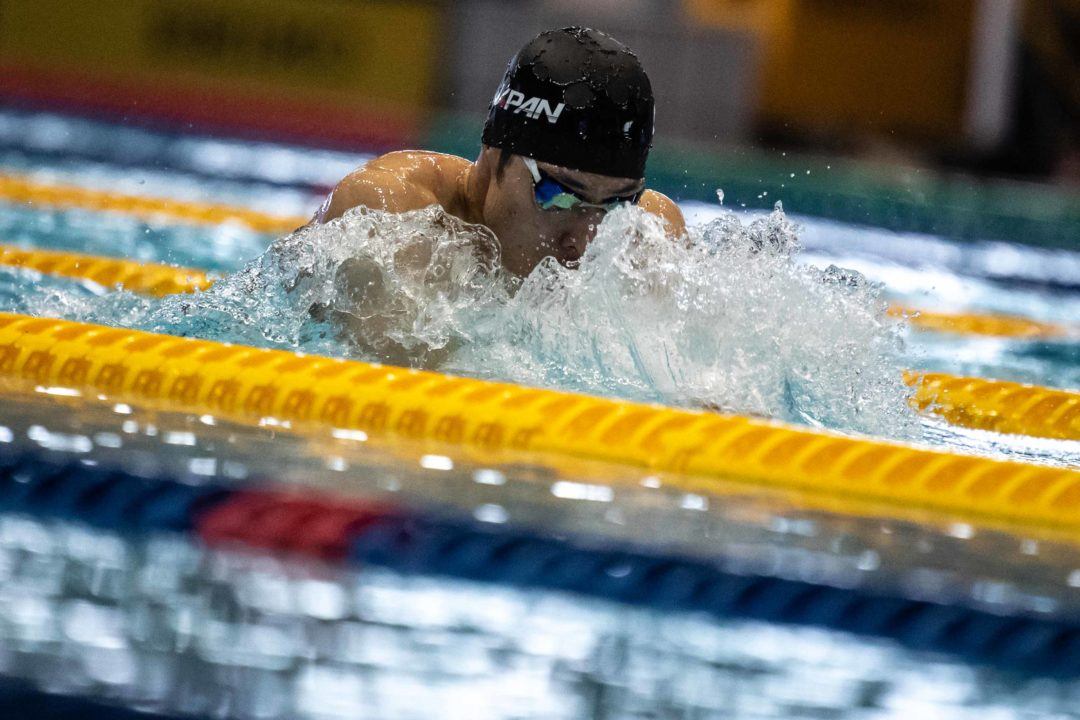 As the ISL team of the Tokyo Frog Kings had the first-weekend bye, many of the squad's key swimmers raced at the Japan Short Course Championships. Archive photo via Mike Lewis/Ola Vista Photography

As the International Swimming League (ISL) team of the Tokyo Frog Kings had the first-weekend bye, many of the squad’s key swimmers raced at the Japan Short Course Championships. Top talent to the tune of Kosuke Hagino, Reona Aoki, and Ryosuke Irie were in the Tokyo Tatsumi International Swimming Centre waters, with the comprehensive recaps of the two days linked above.

As we move into week 2 of the ISL, let’s take a look at the top 5 swims of the Japan Short Course Championships in their own right, but also through the lens of week #1’s matches. Keep in mind that the Japan meet was a two-day affair with traditional prelims and finals, as opposed to the rapid-fire racing characteristic of the ISL matches. As such, it’s not a straightforward comparison, but it does shed a little light on where Japan is at heading into this week’s competition in Budapest.

Ok, so technically two swims, but Ohashi proved once again she is the Japanese IM queen across both long course and short course. The 24-year-old’s time of 4:24.87 in the 400m IM was within range of her national record of 4:22.73, a time she hit on the 2018 FINA World Cup circuit.

Once again, technically two swims, but from the same Olympic athlete. Back from his tumultuous 2019, where his 5-month hiatus to tend to physical and mental health rendered him nearly off the Japanese national team entirely, Hagino has been steadily improving to the point where he will be a game-changer for the Tokyo Frog Kings.

As such, this past weekend’s performance checks-in among Hagino’s best in recent years.

Watanabe’s personal best entering this meet rested at the 2:03.23 he put up in 2016, so the former long course World Record holder has now dipped under the 2:03 mark for the first time in his career.

Although Matsumoto nailed a new 200m free national record last weekend in a time of 1:42.10, his improvement in the 100m free is the swim that made our list.

ISL Match #1: As a Tokyo Frog King, his 46.94 time in the lesser event for Matsumoto would have landed him among the top 3, behind winner Caeleb Dressel‘s 45.87 for Condors and Manaudou’s 46.04 for ENS.

ISL Match #2: The 2nd ISL match would have seen Matsumoto’s time render him as the 5th place finisher.

Again with the double swim, but Kawamoto clocked new national records in both the 50m fly and 100m fly event, so they both deserve recognition. He posted a winning 50m fly effort of 22.19, a mark that beat the next closest JPN SC Championships competitor by .24, but it also obliterated the previous Japanese National Record.

The previous national standard stood at the 22.49 Masayuki Kishida first put on the books way back in 2009 before Kawamoto matched it at the 2018 Japanese World Championships Trials. As such, 25-year-old Kawamoto hacked .30 off of his previous career-quickest to land atop the podium and own the new national record outright.

Kawamoto followed up with a big-time outing of 49.54 in the 100m fly to take gold and overtake his own previous NR of 49.60 from the 2018 Japan World Championships Trials. That sub-50 swim bumped him up from 20th to 17th on the all-time performers’ list worldwide in the 100m fly.

How did my boy Irie do? His wonderfully smooth stroke but mediocre underwaters doesn’t necessarily translate well in SCM, but on the flip side he is such a consistently quick in-season swimmer.

We’ll see if they can hold that taper. I imagine some will be upping their training during this ISL season. It’ll be interesting to watch their endurance and speed over five weeks.