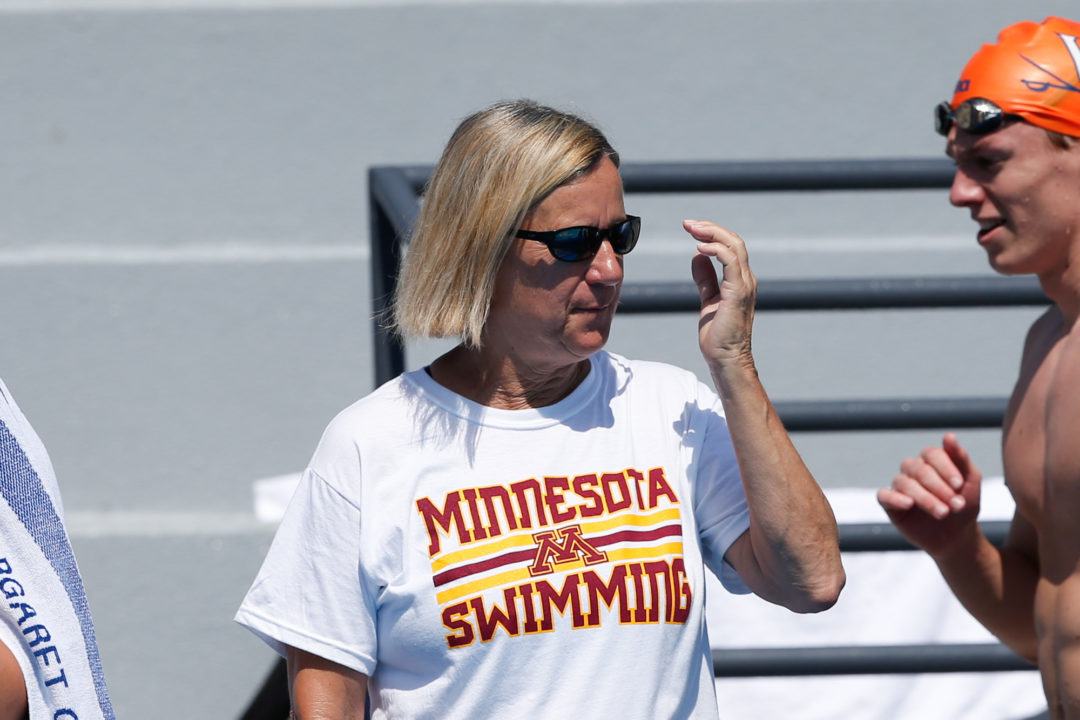 Ganley coached Minnesota Swimmers for over four decades and leaves behind an inspiring legacy as both a coach and an athlete. Current photo via Tim Binning/TheSwimPictures.com

University of Minnesota associate head coach and Minneapolis native Terry Ganley has retired following the conclusion of the 2020-21 NCAA season. Ganley coached swimmers with the Minnesota Gophers for over four decades, this past season marking her 44th, and leaves behind an inspiring legacy as both a coach and an athlete.

Ganley was the longest-tenured coach in Minnesota athletic department history.

During her tenure at Minnesota, more than 100 women’s student-athletes have earned All-America recognition, totaling 450. The Minnesota women were also a force in the late 2000s to mid 2010s, clinching Big Ten titles in 2008 and then from 2012 to 2015. That stretch made the Gopher women the first Minnesota team to win four-straight conference crowns. In 2006, Ganley and head coach Kelly Kremer were named Big Ten Coaches of the Year.

Ganley was a Minnesota coach for the Gophers’ first Big Ten crown on the women’s side, in 1999, while she coached Gretchen Hegener to the 1997 national title in the 100 breast, the school’s first. She also helped the women reach their highest NCAA finish in program history, ninth, in 2011.

Minnesota’s women have won all seven of their Big Ten titles with Ganley on staff, and she has coached the women to 17 top-15 finishes.

“Today I had the privilege to do something that not many people get to do,” Ganley said.

“I was able to announce my retirement from the place where I spent four years as a student-athlete and then coached for 44 years. Maroon and Gold is and always will be home for me. It was an honor to teach, coach and mentor the young women and men of this great program. I am truly blessed to have spent my career as a Gopher.”

Ganley was named associate head coach for the men’s and women’s teams since the 2014-15 season. She co-led the team with Kremer for several years following the retirement of legendary head coach Jean Freeman, while she served as an assistant for 27 years under Freeman prior.

“There aren’t enough words, or words big enough, for an occasion like this,” said Kremer.

“Terry is the standard for how to love and care for this University and program, and she will be greatly missed. Personally, she is a close friend, colleague and mentor, and I know she will continue to support us as she takes this next step in her life. I would like to thank her and congratulate her! What an amazing legacy!”

Congratulations Terry for a wonderful career and dedication to this great sport of swimming!

I thought this was a joke at first god damn. Idk why I’m surprised I just assumed he would coach forever

He said he would coach forever! I would assume that managing everyone might be starting to get too much for him

Reading the statement he is staying on as coach emeritus, so he will keep coaching!

What a career! Stay at same place all these years and be consistently good! Enjoy the next chapter

Ehh, fell off quite a bit the last few years. Good career, though. Still not sold on the coaching set up at MN.

Here we go again… thanks for your deep insights. Maybe just quit the cynicism for once and just be respectful @formerbig10? Or is that too hard since you’re such an expert of the sport?

Would you like my resume, and an in depth analysis on the HUGE drop off MN has had over the last decade? Ask anyone from the state and they’ll tell you SOMETHING isn’t right, and when the head coaches are the ONLY constant over the last 15 years… or are those cookie crumbs too hard for you to follow?
I definitely give credit where credit is due, but am also not afraid to speak about programs that have been way off the mark. Sorry to draw rain from your thin layered cloud.

Actually, yes, I would love to see your resume! For someone who is so qualified, you should have no issue in putting your name out there.

Also, not drawing rain and I would respect your points much more if you didn’t just complain for the sake of complaining and instead offer solutions… since you seem to be the expert.

Until then, I expect you to continue to live for being that negative commenter on anything swimswam posts about Minnesota. What a life.

What is wrong with the coaching situation at Minnesota? Please explain. I have a friend whose relative is looking at Minnesota to swim in college and they, plus myself would be interested in what is or isn’t going on

Believe me, if you know Minnesota and you know Max, Max isn’t going anywhere. Great coaches and great team.

Just look at their placings, from Big10 championships, over the last decade.

Yes, I have noticed that. As a former Gopher I am just curious as to why this is happening. however, people just make negative comments without explaining why they are making these comments. Is it the coaching, the swimmers, the bad location of the University (too cold in Minnesota, all the negative events that have been happening in Minneapolis? Like I stated before, I know someone who is interested in Minnesota and I recommended the school to her (she is a good breaststroker).

Minnesota is currently a young team who was hit bad with Covid, the whole team were out for over a month late into the season this year. The team dynamic is strong, and the coaches are great. From what I know, you want people you know to swim for someone like Kelly.

I was thinking the same thing, IU?

That would totally suck for Minnesota if McHugh transferred