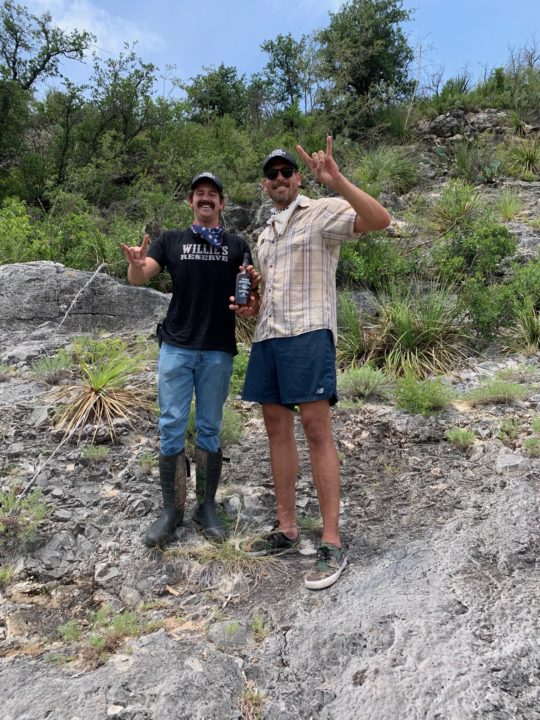 Former Longhorn swimmers Sean Foley and Will Glass have used some the skills developed in swimming to successfully run Nine Banded Whiskey in Austin. Current photo via Sean Foley

Torres pushed boundaries for gender and age, forging new paths for women. However, underneath the success was a mounting pressure to look a certain way

Speedo, the world’s leading swimwear brand, announces the launch of SPEEDO POOL TOGETHER, a fundraiser for the entire month of March!

Olympic Champion Nathan Adrian and the SPEEDO POOL TOGETHER Fundraiser

Five-time Olympic gold medalist Nathan Adrian explains the launch of SPEEDO POOL TOGETHER, a Speedo fundraiser for the entire month of March!

Olympic champion Kathleen Baker announces the launch of SPEEDO POOL TOGETHER, a Speedo fundraiser for the entire month of March!

In many ways, the atmosphere and skillset created on a swim team can equip you with the tools to be successful in any area of life, particularly when working with a group with a specific goal in mind.

For University of Texas alumni Sean Foley, a 2003 grad who was a part of three national championship-winning teams, he’s taken his experiences with the Longhorns and parlayed that into developing a successful whiskey business in Austin, Nine Banded Whiskey. The co-founder and CEO since 2018, Foley has used several of the things he learned in the water while building the company.

A native of Brookfield, Wisc., Foley began swimming at a young age and never looked back.

“Brookfield has a great tradition of swimming success so it was awesome to grow up swimming in that area and for Elmbrook Swim Club,” Foley told SwimSwam. “Winning the Wisconsin State High School Championships (both individually and team) and the NCAA Championships for the University of Texas (team) both multiple years were great moments I’ll always cherish.”

After graduating from university, he had a career in the sports and entertainment industry prior to Nine Banded, including working for Octagon, Michael Phelps‘ agency, in his first job out of school.

“Those early days of working with Michael I really began to see how people manage and build consumer brands,” said Foley. “Michael worked with so many blue-chip brands who were all managed a little bit different but all the successful brands I think nail one thing: culture.

“Starting Nine Banded in Austin means we’ve had the chance to work with Austin’s great music, film, and sports cultures that help to make it the great city it is. I also think it’s really important to have people who care about each other and get behind a common goal. Kind of like a swim team.”

Under that team culture he had developed, Foley knew bringing on another Texas swimming alum, Will Glass, would make a great fit.

“Even though we didn’t swim together, I knew having Texas swimming as a common thread meant Will was a hard worker who knew how to put up with Eddie’s jokes,” said Foley.

“After studying advertising and business in college, I set out to do something I was passionate about, especially after seeing so many of my friends not enjoying work post athletics,” said Glass, who graduated in 2017. “I worked on a ranch part-time before landing a gig at Nine Banded.

“There are a lot of similarities to swimming and working on a ranch, early mornings, hot and hard work. Once I got the job at Nine Banded, I used those same skills to operate our production facility where we produce two different types of bourbon.”

Similar to Foley, Glass sees many parallels from his days at UT with the work he’s doing with Nine Banded Whiskey, and credits coaches Eddie Reese, Kris Kubik and Wyatt Collins with helping him prepare for life after swimming.

“I’m incredibly thankful that I competed collegiately in college and created the network I have today,” he said. “Sean’s designed a culture that’s very similar to the way Eddie runs his program. Similarly, everyone on our team wants to win. The brotherhood that Eddie, Kris, and Wyatt have developed over the years is long-lasting.

“Sean and I both won three National Championships in two different decades, all with the same coach, something not many people share with their bosses. Swimming at The University of Texas might not have taught me the scientific and hands-on knowledge that I need to complete my job today, but it did give me the skills to be able to adapt and learn quickly.”

A typical day for Foley consists of keeping “the business on the railroad tracks.”

“I lead finance and marketing efforts primarily, and have a great COO who helps run our day-to-day business,” he said. “We are available now in about a dozen states, so there’s just a lot to keep up with on a regular basis.”

For Glass, his day-to-day duties as the Distillery Manager generally run in two-week cycles while creating new batches of bourbon.

“It starts with the dumping and blending certain barrels together,” he said. “We follow that up with a big filtration day which extracts the charcoal out of the raw product. Bourbon must be aged in new-charred oak barrels, and when you finally dump out you’d be surprised how much charcoal sediment is in the product.

“We then drive 2 ½ hours into the Hill Country to pull 250 gallons of fresh limestone filtered water out of a natural spring. This is the best day of my job. A day later we will proof down the batch of Bourbon from roughly 115 proof (57.5%) to 90 proof (45%) using hydrometer and thermometer combo. Once we get the batch to 90 proof we can begin the bottling process, which is usually done by hand.”

One of the keys in developing Nine Banded Whiskey has been integrating the fabric of the Austin community into the product.

“Nine Banded honors Austin’s history in much of what we do and how we do it in addition to the real engagement we have with our communities wherever we are,” said Foley. “We have a strong footprint across Texas and have a growing presence in southern California, Colorado, Wisconsin, Arizona, Florida, and others.

“We want to be the next great American whiskey company.”

That’s awesome! Way to find something you love to do after swimming, it can be a tricky feat. Hopefully the whiskey is in more than Texas, I’d love to try it!

Glad to see one of my name sake doing well

I always knew Sean would go BIG TIME one day. I am very proud of this extremely good man with a great soul!