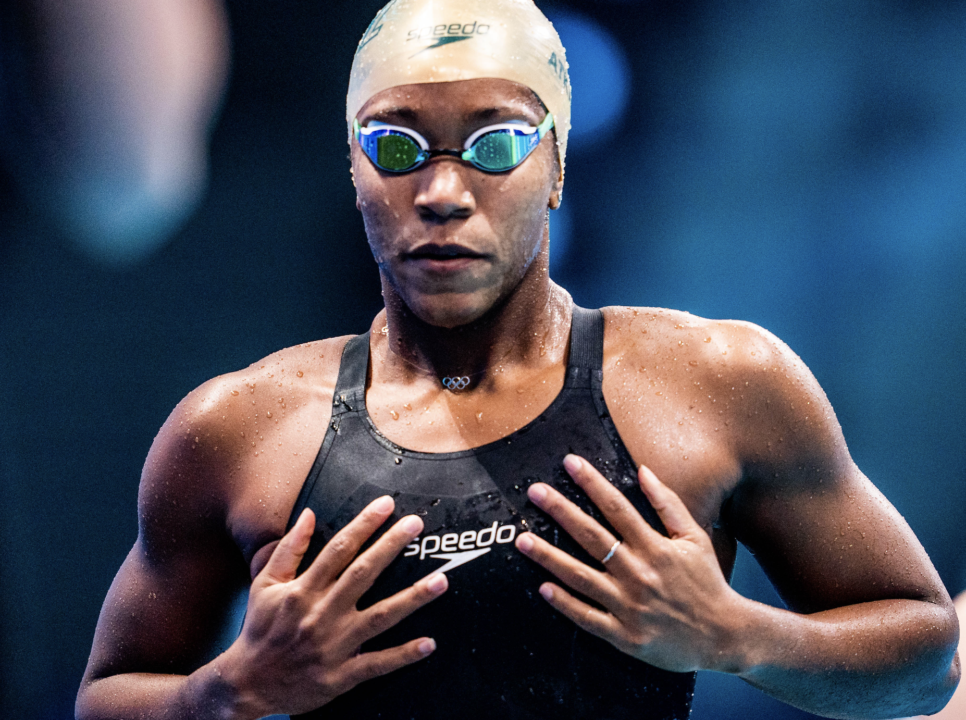 Alia Atkinson of the London Roar will get her first crack at a 'skins' event on Saturday after her team chose the breaststroke. Current photo via Mine Kasapoglu/ISL

The London Roar, winners of the women’s medley relay on Friday at Match 5 of the 2020 ISL season, have chosen breaststroke as the women’s skins event for Saturday, while the LA Current have chosen butterfly as the men’s discipline.

Take note that the team that has chosen the skins event has won that skins event in each meet of the season so far.

The choice seemed murky at first for London, which holds a surprising 65.5-point lead over the LA Current. The Tokyo Frog Kings are another 3.5 points behind.

We knew London was better-than-expected in their first meet, but between matchups and breakthrough performances, plus the benefit of coming off a ‘rest’ week last week while LA Current are racing for the 3rd-straight week, the Roar have launched themselves to a significant victory.

Because the ‘skins’ events are worth so many points, and with many races left to swim, that doesn’t mean things are out of reach. Certainly not the way that the Cali Condors had Match 4 out of reach last week.

In the women’s 50 backstroke, London was 1-5, with Kira Toussaint and Maria Kameneva. Remember that London did swim a backstroke skins at an earlier meet, and Toussaint looked unbeatable in round 1, but then failed to even qualify for the final.

Toussaint, in a vacuum, seems better equipped for the 3-round fervor of skins (and she has a bigger margin over the field), but team scoring isn’t done in a vacuum.

The one swimmer most likely to upset the apple cart in the 50 breaststroke is Lindsey Kozelsky, who was 2nd individually. She swims for DC Trident. If Kozelsky wins that ‘skins’ event, London almost definitely wins the meet. If Atkinson wins, or if Lazor wins, they almost definitely win the meet. The most likely upset scenario becomes if Tokyo’s Reona Aoki or Miho Teramura find a new gear and win.

For the LA Current, who have a pair of 200 meter specialists in Julia Sebastian and Kierra Smith holding down the fort in that group, that further pulls Beryl Gastaldello out of the mix. While she didn’t swim the 50 back individually, she certainly is capable, and is capable of winning a 50 back skins.

So, the murkiness, upon further inspection, becomes an obvious choice.

For the LA Current men, the choice is a deviation from the ‘all Murphy, all the time’ strategy that has worked so well for them in skins this season. Here they would run into the lethal London duo of Guilherme Guido and Christian Diener. While Murphy is capable of winning that skins anyway, Guido did beat him in the individual 50 back on Friday. With the way skins scoring is structured, even getting beat in the first round costs the Current.

So instead they’ve shifted to the 50 fly. While London’s Marius Kusch and Vini Lanza are still very good in that event, Shields has been on another plane this season, and seems to get better every time he swims. That includes a 48.94 in the individual 100 fly on Friday.

Shields has earned more money this season than any other swimmer who has not done a skins race, so this will be his first real crack at the event. Besides being favored to win, he has some Jackpot potential here, certainly more than Murphy in the 50 back against this field.

The problem here is that, because London is also good in this event, it seems unlikely that the choice will allow the Current to catch the Roar. The Roar’s only really weak skins event is the freestyle, where Current did have the event winner Kristian Gkolomeev.

But this choice almost assures the Current of the opportunity to finish ahead of Tokyo for 2nd place, as Tokyo went 2-3 in the men’s 50 free.

Tokyo could use Vlad Morozov here as their 2nd entry alongside Takeshi Kawamoto, and probably should, but Morozov hasn’t been at his peak. That is a ‘maybe’ threat to Shields, but not a high threat.

Butterfly is not a total white flag, but it is a conservative choice.

Yeah.. only place where Shields would be out of favor on fly would be against Dressel Nicholas and Szabo.. so safe choice at last for getting 2nd place..

Getting the nod to race the skins must be a pretty good feeling. I bet there’s a lot of pressure to perform for your team knowing that it could’ve been a different stroke.

London so scared of gettin’ SMACKED by Gastaldello

Could say the same about Murphy…