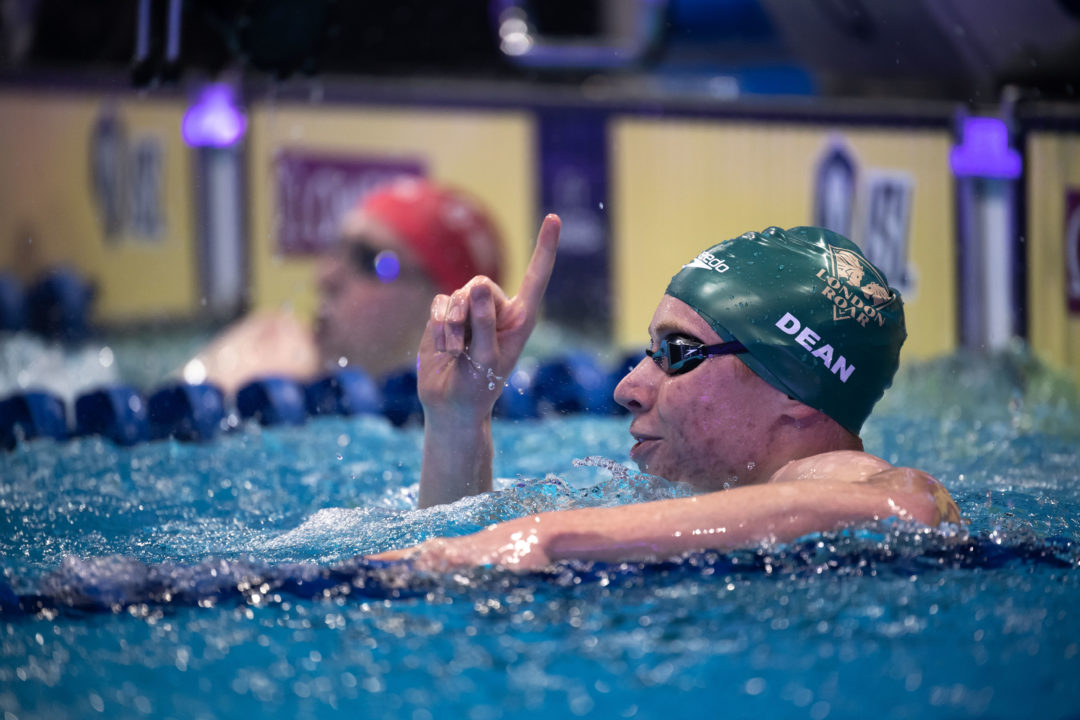 London Roar GM Rob Woodhouse recently sat down to give his thoughts on Season 2 of the ISL and offer a preview of season 3, coming in 2021. Current photo via Mike Lewis/Ola Vista Photography

London Roar General Manager Rob Woodhouse sat down with British swimming site Pullbuoy to discuss the recently-concluded season 2 of the International Swimming League as well as offer fans a preview of what they might expect in season 3 of the ISL. Woodhouse teases four primary changes that could come in season 3, including: changes to jackpot points; changes to recruiting or drafting swimmers; a mixed medley relay instead of the mixed freestyle relay; and “clusters” of meets for the regular season, similar to the way the FINA World Cup operates.

When asked about the jackpots, Woodhouse says he’s “not a huge fan of them,” though he says they could be “tweaked” in some way, and states that there’s talk of possibly making the jackpot margins higher in relays. That is in spite of jackpots not being very prevalent in relays in season 1.

Jackpot points were introduced in season 2 as a means of making blowout victories more exciting by allowing swimmers to steal points if they won the race by a wide enough margin, sometimes allowing for one team to leave a race with all of the points such as Cali Condors Caeleb Dressel and Marcin Cieslak did in the 100 IM in both the semifinal 2 and the Grand Final. While this is not necessarily a bad thing, Woodhouse states that he and the other GMs felt that jackpots happened too often, and depending on the race and the swimmers competing sometimes made for too drastic of point swings.

As professional sports leagues go, the ISL is unique in terms of drafting and recruiting athletes. In its two seasons, swimmers have not been drafted or traded and have had a great deal more autonomy in which team they represent. Though the framework for an athlete draft is not fully in place yet and the GMs have agreed not to actively recruit from other teams, Woodhouse acknowledges that he and other GMs had their eyes on athletes on other teams throughout the entire season.

Woodhouse admits that he asked the other GMs after the second match “how many people are making a list of athletes they want to try and poach from other teams,” to which nearly everyone replied in the affirmative. Conversely, Woodhouse acknowledges that athletes will try to migrate to stronger teams and therefore each team needs a way of protecting a certain number of its athletes in order to keep them on the roster. There will then likely be a draft for the athletes that are not held onto by their GMs and coaching staffs, thereby allowing them to get ‘drafted’ by other teams. This means swimmers will have less of a say on which team they compete for, and if a swimmer is unwilling to go to another team yet is not retained by the team they were on the previous season they would not be able to compete.

Speaking on the proposed draft structure, Woodhouse said: “There will be a process where teams do protect a certain number of athletes, and then every other athlete who’s not protected effectively nominates for what will effectively be a draft, so it becomes similar to many other professional sports and leagues where you don’t necessarily get a say where you go.” Woodhouse added that a draft will allow teams to become more even, “[a draft] will give all the teams a chance to, firstly, protect their stronger athletes and then build on [that] with, obviously, draft picks going to them, so the lower-ranked teams this year, in the first place,” meaning that the lower a team finished this season the higher priority they get during the draft in 2021.

Due to the Coronavirus pandemic, all of season 2 had to take place within a six-week time frame in Budapest, an experience that both had its positives and negatives. One thing the ISL could take from the experience going forward is to create clusters of meets all staged in the same location, possibly lasting four weeks at a time, to account for the regular season, as well as a post-season cluster for the league’s best teams in season 3. “Maybe two clusters of four weeks and then go into a final at the end of the year,” says Woodhouse. If clusters of meets do make up the 2021 ISL Season, Woodhouse expects there will be one in North America and one in Europe.

The event schedule is likely to remain largely the same for season three, though Woodhouse says that there is talk of swapping the mixed freestyle relay for a mixed medley relay.

You can listen to the full podcast below. Though the entire episode is 39 minutes, Woodhouse signs off right at 25:00. The rule changes are discussed from 8:55 onward.

A draft that allows teams to protect all their strongest team members seems like it’d only be helpful if the teams were already relevatively even.

I thought the same thing. Especially with jackpots. Maybe the equalizer is whether there are enough good swimmers not in the league this season who will join? I’m not sure Simone Manuel is going to sign up if it means she’s going to have to join Aqua, though.

Maybe’ll she’ll get snapped up by Trident instead. At least with the strongest team members protected the top teams won’t get to poach breakout stars from other teams like Sakci from Iron and probably McKeown if she swam for Aqua this year. I could really see Energy trying to poach both of those.

I understand the point but if that wasn’t the case, and every swimmer was drafted from random, people aren’t going to have ‘favourite teams’ that they will buy merchandise from and follow the social medias of because they will be filled with completely random and different swimmers every year and mkst people follow their favourite swimmers. By that Logic there could be London with no british swimmers or Iron with no Hungarians and it literally would make no sence that the teams are location based. It’s not like in the premier league at the end of the season all the players are free agents and have to sign onto teams, it would mean there is no continuity between seasons and… Read more »

This is true, but they should’ve been drafted to begin with and only then, when the teams are relatively even, allow teams to hold onto their strong team members and have continuity. My objection isn’t with the protection of strong team members but with the starting point where teams are so horribly imbalanced. Instituting this change now means it will take years for the teams to even out if ever.

There should also be some provision for recruiting local team members but it should be limited and beyond that point it’s all draft.

I thought he said it would be a number of, rather than allof , their strongest swimmers. For some reason I have 8 in my head but can’t recall if he said that. So if teams have to decide who their 8 (or whatever number is decided) MVPs are and draft the rest that works to my mind.

I’ve heard numbers much higher than that. More like 8-10 per gender.

But, as is per usual, we won’t get any official answer from ISL until it’s all done and they tell us what the teams are 2 weeks before the season ends. So I guess we’ll see everyone in October 🤷‍♂️