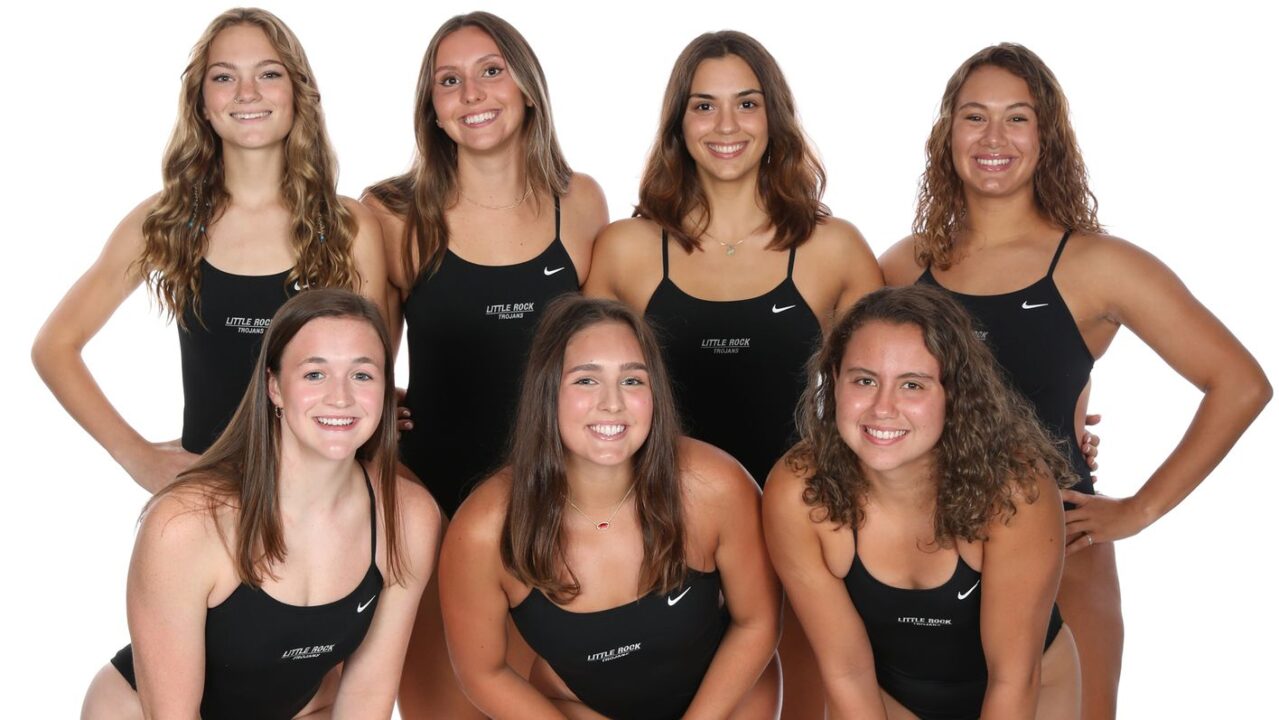 LITTLE ROCK – Little Rock swimming and diving team has officially added six swimmers and one diver for the 2022-23 season, strengthening a Trojan roster that has been steadily improving over the last few years.

Read more about each incoming student-athlete below:

A Winter Junior National qualifier with the club team Inspire Swim Team, DeSordi has breaststroke and IM talents that are sure to make an impact on Little Rock’s Team. Her current personal best time of 2:18.03 would have comfortably made the A final of the 2022 Missouri Valley Conference Championships, and is less than a tenth of a second away from breaking the current Trojan record in the event, set in 2017. DeSordi’s 100 breaststroke (1:04.28) and 400 IM (4:30.35) would also make the Trojan Top Times List, as well as be on the edge of the A final at the conference championships.

Coach Burgess on DeSordi – “I am so excited to welcome our first swimmer from Nebraska! Allie is one to watch this season as she will make some big waves in our breaststroke and IM groups, and I know she will be an immediate player in the MVC.”

A strong 100 swimmer, Maddux will likely be featured in the 100 butterfly and 100 freestyle, with a third event that could range from the 100 backstroke, to the 50 freestyle, to the 200 butterfly. Her 100 fly mark of 57.39 would already be right on the edge of scoring at the 2022 Missouri Valley Conference Championships, while her 100 freestyle times both in meters and yards are both from this year, showing that she is ready to drop even more time.

Coach Burgess on Maddux – “A diamond in the rough, Olivia is coming into a strong sprint group. We can already see her drive and determination to compete is going to help continue to strive to be at the top of the MVC.”

Ragsdale began diving her sophomore year of high school, but in just three short years she cemented herself as a top finisher at the Arkansas 4A-1A State Championship meet, placing second in back-to-back years. In addition, from her first to her second year, she improved over 100 points at the State meet on the 1 meter board. Between the introduction of the 3 meter board along with one-on-one training with new diving coach Chris Pape, Ragsdale should be the start of a new and improved Trojan diving team.

Coach Pape on Ragsdale – “We are really excited to have Izzy joining us this year. As we work to revive the diving portion of the team, she will be a great step towards that goal. Izzy brings both an enthusiasm and an excitement that will compliment her abilities and allow her to have success while we move forward.”

Coach Burgess on Sibik – “Adding more depth to our IM and breaststroke groups, Duru will be one to watch this season. I believe she will fit in well with our hard-working IM group and elevate the team as a whole.”

The home state snatch of this class is Spencer, who had a stellar senior year with the Razorback Aquatic Club Aquahawgs. She posted a 5:02.26 this spring in the 500 free, a time that would comfortably make the scoring B final of the 2022 Missouri Valley Conference Championships, while her time of 17:30.79, a mark that would be second on the Little Rock Top Times List, would also have scored points. She also has a knack for butterfly in her back pocket, including a 2:06.56 in the 200 butterfly, which would have been in the thick of the B final at last year’s conference championships.

Coach Burgess on Spencer – “Extremely excited to have some Northwest Arkansas representation on the team this year. Keep your eyes on Avery, as she is going to have an immediate impact in our distance group. I am looking forward to watching her grow this season and beyond, in and out of the water.”

Sterchele, a swimmer that trained with FMC Aquatics for club, brings a healthy mixed bag to the Trojans. Her primary events could be the 100 backstroke or 100 breaststroke, but she also has potential to grow in the 200 IM and 100 freestyle, depending on what Sterchele will focus on. Her time of 58.91 in the 100 back and 1:08.47 in the 100 breast would have been right outside making finals at the 2022 Missouri Valley Conference Championships.

Coach Burgess on Sterchele – “With Nikki’s range of events, it is going to be fun to watch her grow and find her groove these next four years. She is well-rounded and a great addition to the team.”

Hailing from Bermuda originally, Thompson is a late bloomer that has dropped significant time in the past few years. While she skews toward mainly sprint freestyle events, and her times of 25.41 in the 50 free and 54.55 in the 100 free were outside of scoring range at the 2022 Missouri Valley Conference Championships, if she stays on her trajectory of improvement with the addition of collegiate training under her belt, Thompson could become a future threat.

Coach Burgess on Thompson – “With a lot of untapped potential, Talia is going to add some needed depth to our sprint group. We are expecting great things from her as she gets stronger this season.”