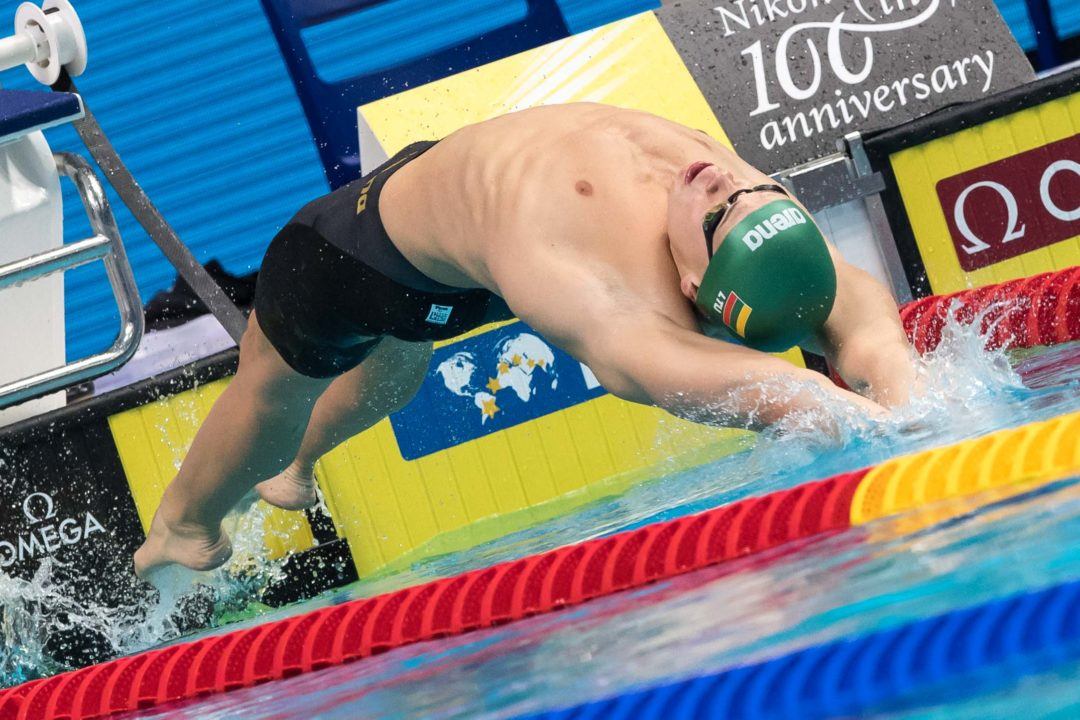 The roster will be led by Danas Rapsys, who won the 200 and 400 free at last weekend's FINA Champions Series. Archive photo via Mike Lewis/Ola Vista Photography

Lithuanian swimmer Ruta Meilutyte has not been chosen among among the 8 (pool) swimmer team for the 2019 World Championships. The meet will take place from July 12th-28th in Gwangju, South Korea, with swimming taking place the 2nd week of that time period.

The team’s only returning finalists from the 2017 World Championships are Danas Rapsys (8th in the 200 back) and Andrius Sidlauskas (6th in the 100 breast). Meilutyte placed 4th in both the 50 and 100 breaststrokes in 2017.

Simonas Bilis is also a potential finalist: he was just 29th in his specialty event, the 50 free, but was 8th a year earlier at the Olympics.

Meilutyte is awaiting a final edict after missing 3 anti-doping tests in a 12 month period. Her coach Dave Salo said that she took a training break after the 2018 World Championships and returned home to Lithuania, and that this was the likely explanation for the missed test rather than dodging detection.

While Lithuania seems to be bracing for at least the minimum 1 year suspension in this case, Emil Vaitkaitis, the head of the Lithuanian Swimming Federation is not ready to declare this the end of her career.

Vaitkaitis says that the federation has done all that they can to help Meilutyte, but that they don’t believe that it’s possible to avoid a penalty of at least one year. He does, however, insist that she is clean.

Talking to Lithuanian news site lrt.lt, he said “After already missing 3 tests, she was checked by the (anti-doping controller), this time they found her, took samples, and as far as I know, the tests were negative. Rather, we do not have the information that the tests were positive, which probably means they were negative.”

Vaitkaitis insists that he does not believe that Meilutyte intentionally missed her tests – he believes that she wanted to retire, so she didn’t update the ADAMS whereabouts system. He further emphasized that she admitted her mistake, did not try to make up excuses, and that he believes that this shows maturity.