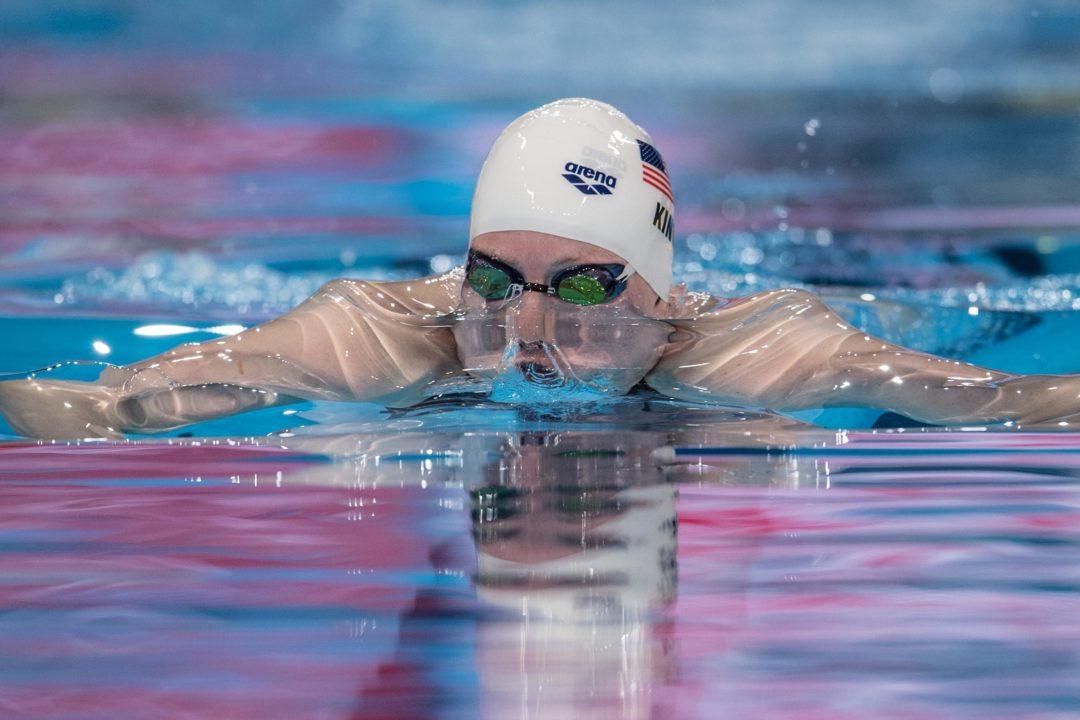 Lilly King ripped a 56.17 breaststroke split during an epic 400 medley relay on the second night of the 2017 NCAA championships. Current photo via Mike Lewis/Ola Vista Photography

NC State’s Alexia Zevnik will be looking for her third individual win, which would likely sew up the conference’s Swimmer of the Year honor, as all the other candidates have already lost an individual race.

Perhaps lost in the shuffle a bit tonight during an absolutely epic 400 medley relay was Indiana’s Lilly King.  While it was clear she had ripped a monster leg, the subsequent duel between California and Stanford, and the DQ drama, meant it took a while to see exactly how fast King has gone.

Turns out King had knocked out a 56.17, which is unofficially the fastest split ever (only because official records are not kept on splits) by a wide margin.  King went 56.74 at last year’s NCAAs, then split 56.53 at the Big Ten conference championships a few weeks ago.  From what we can tell, no other swimmer has ever split under 57 in this race.

Here’s the crazy thing: one could consider King’s swim tonight “slow.”  Considering that she’s been 56.30 in a flat start it would not have been shocking (relatively speaking) to see a sub-56 split.  Still, King’s time tonight was over two seconds faster than anyone else in the field, with the next fastest split belong to Louisville’s Andrea Cottrell, at 58.20. King put Indiana in the lead against a stacked field not only through her leg, but also built up enough of a lead to keep the Hoosiers setting the pace through the fly leg as well.  In fact, going in to the freestyle, it looked as if four or five teams had a chance to win.  Indiana eventually settled for 5th, as Holly Spears couldn’t quite hold against some blazing freestyle legs.

It’s worth pointing out that King was actually faster in the individual 100 breast at Big Ten’s than on the relay split, 56.30 vs. 56.53.  If that pattern was to hold here, and if King was to swim 0.23s faster in her individual race tomorrow, we could be watching the first 55-second 100 breaststroke ever.

I’m proud to say that I am faster than Lilly King in the 100 breastroker.

When I do freestyle….

Incredible. Going from first to eighth in one leg.

IU was first after the fly. Just needed the sprint freestyler!

She doesn’t have clean water on the relay. I think we can expect faster on the individual again