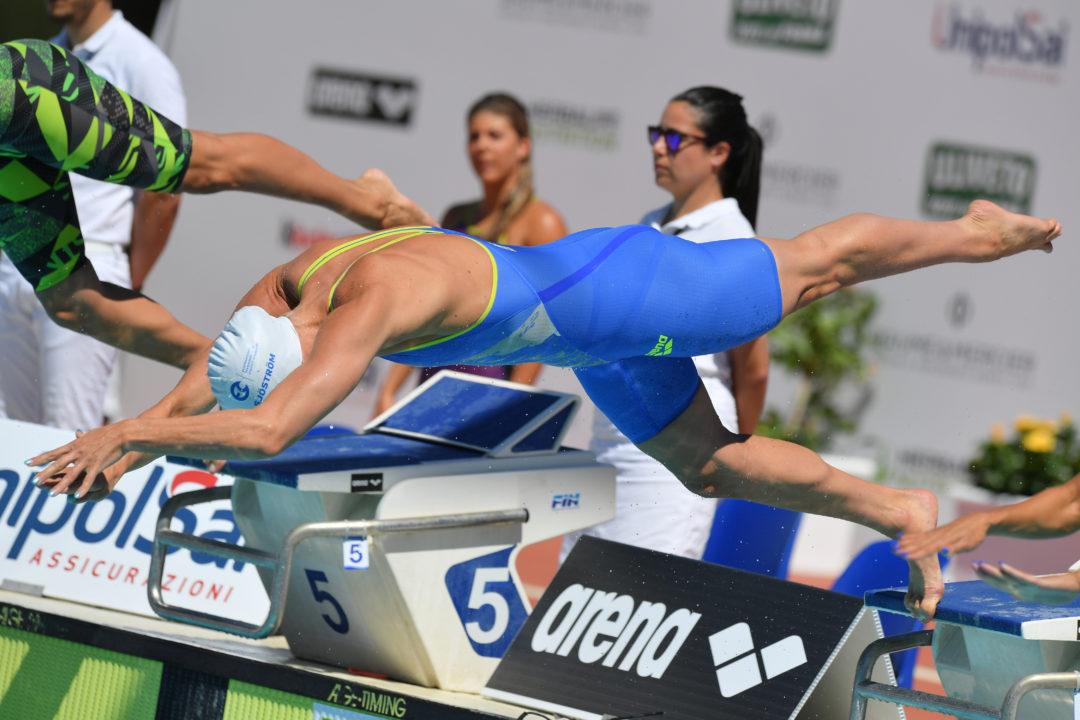 With the International Swimming League (ISL) set for its inaugural meet tomorrow, a few of the league's top swimmers have weighed in on opening weekend. Archive photo via Arena

With the International Swimming League (ISL) set for its inaugural meet tomorrow, a few of the league’s top swimmers have weighed in on opening weekend.

We’ve pulled some of the more interesting quotes from each swimmers or GM below, with links to their full interviews on the ISL site:

“I know the American pro athletes definitely miss college swimming, so I think the team scoring will be giving us some flashbacks to our NCAA days,” King says.

King has been an outspoken athlete when it comes to anti-doping issues. She minces no words in talking about the ISL’s policies:

“Having a zero tolerance stance on doping is something that I believe every league should have,” she says. “Cheaters should not be competing. End of story.”

King also references her training partners who are on opposing teams. From the ISL release:

“We trash talk even when we are on the same team! But there will for sure be arguments over who is going to win.”

“I think the energy amongst our team and the chemistry we have is second to none,” le Clos says on the ISL site. “I’m very, very proud to be leading this team as captain, and also just to be apart of this amazing group of athletes. We’re all great friends and we all hang out on the weekends. Having so many great champions in the pool at once really elevates your game to a new level.”

“I think the ISL is going to spice up the swimming world,” Le Clos says. “Not just this year, but for years to come. It’s going to give guys longevity, and it’s going to make the sport more exciting.

Sjostrom feels she’s tailor-made for the ISL’s ‘skins’ race – a multiround elimination event in the 50 free:

“My favorite event out of everything is the skins, because I’m a good sprinter, but I also have very good endurance from the 200 freestyle,” she says. “I’m very, very excited about the skins.”

On the landscape of the ISL, particularly among European teams:

“Energy Standard has a really good team with a lot of swimmers who can swim a lot of different events, so I think we are a really, really strong team,” Sjostrom says. “Especially when you put together the relays.”

“I know that I have some really strong competitors for my events on the London team. Bronte and Cate Campbell, Emma McKeon, and a lot of other really strong Australian swimmers. Obviously they are very strong.”

“Tactically focusing on the skins and relays will give any team a greater windfall of points and we are no exception,” says Gibson.

“The critical thing with the relays is to have two strong teams. There is also a knock on effect to consider with the athletes competing just before or just after the relays so you have to be smart with team selection. There are so many different variables.”

“Having the bulk of the team together in one location is a big bonus for us going into this inaugural ISL season,” says Gibson. “Everyone knows each other and the coaching team understands the needs of the athletes.”

“When I look at the teams on paper, the Cali Condors jump out as the team to beat,” he says. “We have to prepare the star athletes for a different mindset in ISL. Multi-event racing, open media access, points not times and ultimately a team first mentality. The USA teams have a cultural advantage with their NCAA experience but we will learn quickly and come to Indy for some serious racing.”

“To keep everyone guessing we could use Caeleb [Dressel] in all the relays and six individual events or just a couple,” Lezak says. “Planning all the swimmers’ events is very strategic and will also change during the meet based on athlete’s performances.”

“Having NCAA experience will help in this format and we have over 80% of our team who has participated (in it) which could be an advantage for us over some other teams,” says Lezak.

“Since we will be competing against (the) DC Trident the first two competitions I definitely can see a rivalry happening,” he says. “Looking at the LA Current roster, everyone knows they will be a tough team to beat and we look forward to seeing them at the derby meet in November and hopefully again in the finals.”

“Obviously Katie [Ledecky] is dominant in those freestyle events, but if the coaches see an opportunity for her to help the team in other ways, they feel empowered to explore those options,” says Sandeno. “At the end of the day their goal is to win.”

“I’d call it a friendly rivalry,” she says about competition between the American franchises. “I have known Lenny (Krayzelburg, LA Current GM) and Jason (Lezak) for a very long time. We’ve gotten to be very close over the years, and with that comes the feeling that we all want only the best for each other. But, we all happen to be athletes and therefore we’re all very competitive! And the more I get to know Tina (Andrew, NY Breakers GM), I see that she is equally as competitive as the three of us.”

“More than anything though, we collectively want to see this sport and this league grow, so I think a healthy rivalry between these four American clubs is a good thing!”

This Kaitlin Sundeno – what a snake.