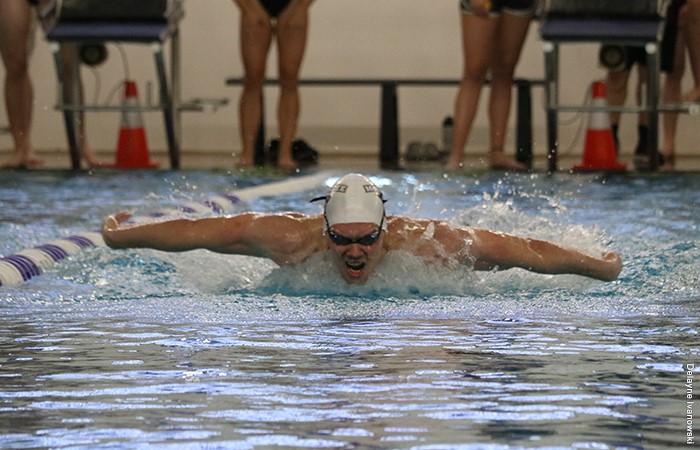 Division II McKendree took on Southern Illinois and came up with a 182-112 win on the men's side, while the Salukis won 203-92 on the women's side. Current photo via McKendree Athletics

O’FALLON, Ill.– The McKendree University men’s and women’s swimming and diving program opened up its season on Friday afternoon at the McKendree Metro Rec Plex against Division-I Southern Illinois University Carbondale. The men dominated the visiting Salukis 182-112 and women were defeated 203-92.

The Bearcats will be right back at the McKendree Metro Rec Plex on Oct. 18 as they host another D-I opponent in the University of Evansville.

Freshman Fabio Dalu and junior Throstur Bjarnason took first and second in the 1000 freestyle. Dalu finished with a time of 9:22.42 and Bjarnason touched the wall in 9:39.41.

Heaphy won his first individual event as a Bearcat after touching the wall in 57.01 in the 100 breaststroke.

The 200 butterfly saw the men take the top two spots as Pucarevic and sophomore John Bodden finished with times of 1:54.14 and 1:55.26, respectively.

The Bearcats won the 50 freestyle on both sides as senior Milica Sostarec turned in a 24.05 and sophomore Gregg Lichinsky finished with a 20.63.

In the 100 freestyle, the men took the three top spots. Skinner took first with a 44.70, senior Luca Simonetti placed second with a 46.94, and freshman Caleb Law finished with a 47.00.

The men took first and second in the 500 freestyle with Dalu and Bjarnason taking the top two spots in both distance events. Dalu finished with a 4:34.84 and Bjarnason touched the wall in 4:43.50.

Pucarevic led the way in the 100 butterfly as the men took the top four spots in the event. Pucarevic finished with a 49.28, Lichinsky closed with a 50.86, sophomores Taras Zherebetskyy turned in a 52.40, and Noah Javens finished with a 52.42.

LEBANON, Ill. — The Southern Illinois swimming and diving program opened the 2019-20 season against McKendree Friday afternoon at the McKendree Metro Rec Plex. The women’s team came out on top 203-92, while the men’s team lost by a margin of 182-112.

Southern won 18 events and finished second in an additional 18 events. The Salukis were led by senior Laura Carver on the women’s side, as she picked up three event wins. Freshman swimmer Adam Cernek won three events to lead the Saluki men. Six Salukis captured two or more wins in the season-opening meet.

“This was my first opportunity to see them compete in outside competition,” head coach Geoff Hanson said. “I was proud of how we used our depth and how the newcomers showed up and raced. The rust was there for a lot of the swimmers because some had not been in real competition since last season, but every time they dove into the pool, they showed adjustments and improved.”

In her first-ever meet as a Saluki, Forbord clocked in winning times of 52.36 in the 100-yard freestyle and 1:53.75 in the 200-yard freestyle. The junior spent her first two seasons with the Colorado Mesa swimming and diving program.

Southern also came away with a victory in the 400-yard medley relay. The quartet of Juliana Carvalho, Sarah Vogt, Young and Jacqueline Rose swam a time of 3:58.10 to outlast McKendree’s top relay team by over 11 seconds.

Men’s team
Cernek shined in his Saluki debut, as he took first in a team-best three events. The freshman earned victories in the 100- and 200-yard backstroke events with times of 50.77 and 1:51.22. His third win of the day was in the 400-IM, where he outlasted the closest Bearcat swimmer by .21 seconds.

Seniors Kai Hoffmann-Dussome and Jimmy Dooley also had strong performances for the Salukis.

Southern opened and closed the meet with second-place finishes in relay action. Cernek, Dooley, Uriel Barajas Tejeda and Hajtman had a time of 3:26.69 in the 400-medley relay, while Hajtman, Yeap, Dooley and Matt Ciezczak finished at 1:25.51 in the 200-yard freestyle relay.

“The divers proved how valuable they are to our team today. The women’s side finished first through fourth and Kai Hoffmann-Dussome showed how good he is and how much he has improved. With Kai being our lone diver on the men’s side right now, he is going to need to continue to step up and be a good leader.”

“Laura Carver stood out in the pool. She won three events and is one of our key senior leaders. She put in a lot of hard work this summer and it has set her up to do great things in her senior season. Sierra Forbord stood out with two event wins in freestyle events and Rita Naude showed a lot of great things as well.”

“On the men’s side, McKendree is even better than they were last year, so I thought we competed very well with one of the best teams in the nation. Adam Cernek showed a lot as a freshman. He started with two wins in the back events and held on to win the 400-IM against one of the best Division II swimmers in the nation.”

The Salukis are back in action next Friday, Oct. 11, for their home-opening meet against Valparaiso and Bellarmine. Events at Shea Natatorium will begin at 2:30 p.m.