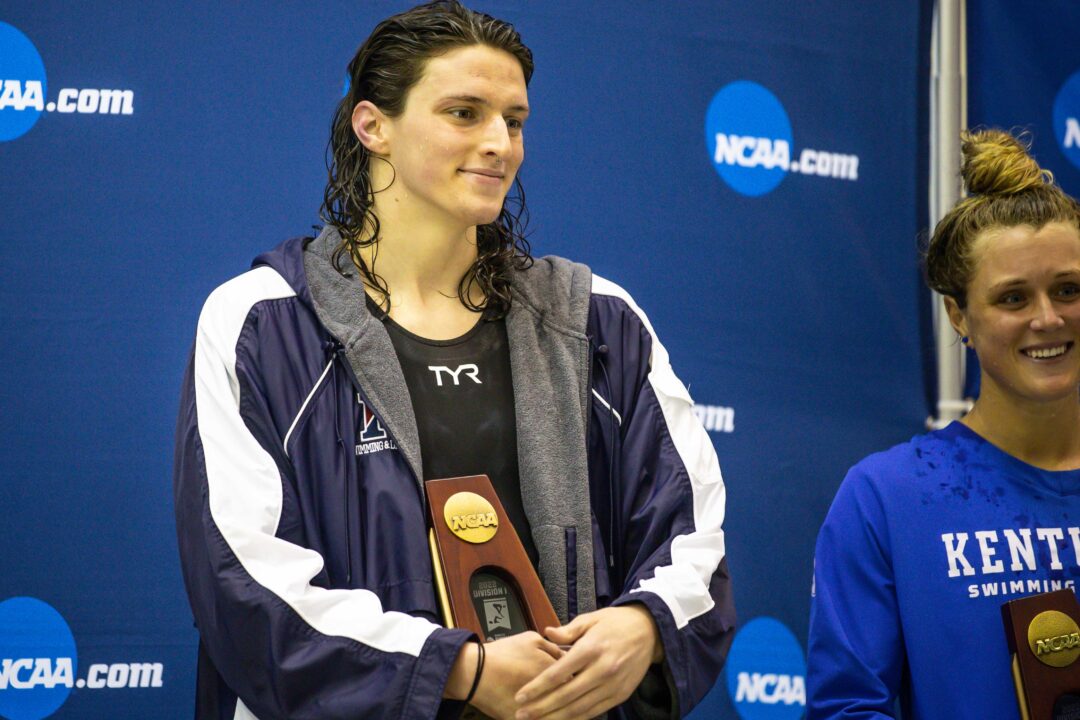 Despite facing backlash regarding her NCAA performances, Thomas has her eyes on racing at the 2024 U.S. Olympic Trials. Archive photo via Jack Spitser/Spitser Photography

Lia Thomas has broken her silence.

For the first time since winning a national title more than two months ago, Thomas spoke publicly with ABC News‘ Juju Chang on the controversy surrounding her performances at the women’s NCAA Championships in March and what her future holds in the sport of swimming.

Thomas, a trans woman, last spoke at length with SwimSwam’s Coleman Hodges in December 2021, opening up on her transition to becoming a woman that first began in 2019.

Since then, the University of Pennsylvania student-athlete won a pair of Ivy League titles in the women’s 200 and 500-yard freestyle events before winning the NCAA title in the 500 in mid-March.

While Thomas’ NCAA eligibility has expired, she says that she’s not done competing.

“It’s been a goal of mine to swim at the Olympic Trials for a very long time and I would love to see that through,” she said.

Thomas also addressed the controversy surrounding her swims throughout the 2021-22 collegiate season that came to a head at the NCAA Championships, which had protesters show up and let their dismay for her ability to compete as a woman be known.

“I knew there would be scrutiny against me if I competed as a woman. I was prepared for that, but I also don’t need anybody’s permission to be myself and to do the sport that I love,” she said.

Thomas, who is preparing to begin law school in the fall, attributed her performances in the pool to having a sense of relief that she was finally true to herself and went through with the transition process.

“There’s a lot of factors that go into a race and how well you do,” she said when asked about her ranking as a woman relative to when she competed in the male category. “And the biggest change for me is that I’m happy. And sophomore year, where I had my best times competing with the men, I was miserable. And so having that been lifted is incredibly relieving, and allows me to put my all into training and racing.

“Trans people don’t transition for athletics, we transition to be happy and authentic and our true selves. Transitioning to get an advantage is not something that ever factors into our decisions.”

Thomas also addressed the group of Penn swimmers that anonymously signed a letter asking Penn and the Ivy League to abide by the updated USA Swimming transgender guidelines that would disallow Thomas from racing in the NCAA postseason.

The swimmers also said they fully supported Thomas in her transition.

“Trans women are not a threat to women’s sports.”

When asked about those that say the lasting effect of testosterone and male puberty can never be reversed, Thomas said: “I’m not a medical expert, but there’s a lot of variation among cisfemale athletes. There are ciswomen that are very tall and have more testosterone than other ciswomen. Should that disqualify them?”

Thomas has not competed since the NCAA Championships, and under USA Swimming’s transgender policy published at the beginning of February, would need to meet the following requirements if she wanted to compete in a USA Swimming competition, which includes the 2024 Olympic Trials:

However, a decision-making panel has room for discretionary decisions.

I don’t know if anyone shares my feelings, But I am sick of pro and anti-trans news people who don’t know anything about swimming talking about the fairness/unfairness of this.

This was the most and only attention college swimming has in mainstream news I have seen in 25 years, and the people talking about it don’t even know how many lengths the distance is.

to be fair, you dont need to know about swimming to know that a man who transitions after going through puberty has a biological advantage over women.

“I also don’t need anybody’s permission to be myself and to do the sport that I love,”

no you dont need permission to be yourself… but there is a decision-making panel that can say otherwise about competing so you do need their permission.

She gonna keep training at Penn?

Swimswam interviewed TWO pro trans swimmers, yet none from the women’s swimmers perspective. Why?

Check out her fellow teammate’s interview with Matt Walsh

You should never check out anything that guy does.

I generally agree, but this may actually be worth the watch. However, the general sentiment towards his usual work is something I agree with you on.

I find myself saying, “It’s just a sport.” Not sure if I’m talking to Cis or trans women.

Trans women should compete against trans women, Its unfair to biogical women on every level

How do you solve the problem that there aren’t enough to make a colorable competition?

Unless the number of transitioners massively increases, an open division that admits both cis men and trans women (and trans men taking testosterone, I guess) is the only available solution.

Put them in the men’s c finals

You create an Open category for anyone of any gender/pronoun to compete in, and retain the womens category for the females who prefer fair competition