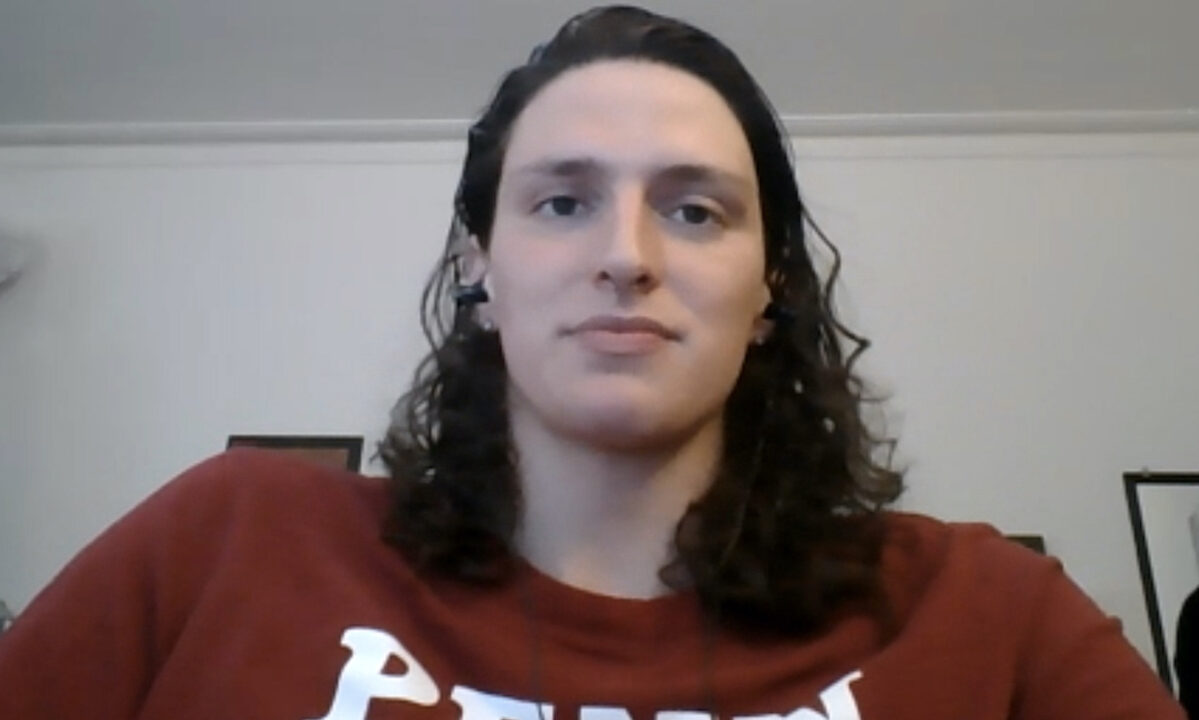 Thomas, a trans woman, discusses her experience transitioning into becoming a woman and competing for the University of Pennsylvania swim team.

University of Pennsylvania senior Lia Thomas has been making headlines so far in this NCAA season, producing several record-breaking performances in what is her first year competing as a woman.

Thomas, a trans woman, sat down on the SwimSwam Podcast to discuss everything from when she realized she was trans, what the transition period was like, and how she’s been able to adjust to life both in and out of the pool.

The 22-year-old said that she came to the realization that she was trans in the summer of 2018, but it took almost a full year before starting the transition process.

“I first realized I was trans the summer before, in 2018,” Thomas said. “There was a lot of uncertainty, I didn’t know what I would be able to do, if I would be able to keep swimming. And so, I decided to swim out the 2018-2019 year as a man, without coming out, and that caused a lot of distress to me.

“I was struggling, my mental health was not very good. It was a lot of unease, basically just feeling trapped in my body. It didn’t align.

“I decided it was time to come out and start my transition.”

Thomas then started to transition in May of 2019, beginning hormone replacement therapy, and came out to the Penn swimmers in the fall of 2019.

She describes the 2019-20 season, her junior campaign, as an incredibly uncomfortable phase, as she still competing on the men’s team despite being in the process of becoming a woman.

After a standout sophomore year that include runner-up finishes in the 500 free, 1000 free and 1650 free at the 2019 Ivy League Championships, Thomas said she struggled the following year during the transition, continuing to train but only competing as much as she felt comfortable.

“Being in the early stages of transition, it was a very awkward experience of basically being a woman competing in a men’s meet. It was uncomfortable, so I didn’t compete that much.”

Thomas only raced in a handful of dual meets that season, her times well off where she had been the season prior.

In the summer of 2020, one year after beginning testosterone suppression, she submitted all of her medical work to the NCAA, which was approved, allowing her to begin competing on the women’s swim team at Penn.

Then came the COVID-19 pandemic, which resulted in the Ivy League cancelling its entire 2020-21 college swimming season.

Thomas took the year off of school as a result, saying her training was very “on and off” due to pool availability, and then began competing on the women’s team this season.

Thomas, who is now two and a half years into hormone replacement therapy, is, therefore, eligible to compete on the women’s team.

The International Olympic Committee (IOC) recently published guidelines for sports regarding transgender rules in sports in November—it doesn’t have cut and dry measures currently in place like the NCAA. Instead, it calls on each sport to implement its own guidelines on what constitues an unfair advantage.

No athlete should be excluded from competing based on an “unverified, alleged or perceived unfair competitive advantage due to their sex variations, physical appearance and/or transgender status,” the International Olympic Committee said.

“Athletes should be allowed to compete but unfair advantage needs to be regulated.”

Regarding the IOC guidelines, Thomas said: “I think the guidelines they set forward are very good. They do a very good job of promoting inclusivity while keeping competitional integrity going.”

Another trans woman that has competed in NCAA swimming is Natalie Fahey, who raced on the women’s team at Southern Illinois University after transitioning, while Harvard’s Schuyler Bailar, a trans man, was the first openly trans swimmer at the NCAA DI level.

Thomas mentioned that Bailar, a fellow Ivy Leaguer, was someone who helped her through the last few years, having shared his experience and giving her advice.

“It’s been a lot of struggles in the 12 months prior to coming out to everybody, to the initial awkwardness, AND the uncertainty to first starting out transitioning,” Thomas said.

“There just seems to be so much to do and things you have to take care of, and it just seems like this mountain. But you get by it day by day, and build confidence each day, and I’m feeling confident and good in my swimming and all my personal relationships.

“And transitioning has allowed me to be more confident in all of those aspects of my life, where I was struggling a lot before I came out.”

Watch Lia’s full conversation with Coleman on the podcast below:

Lia Thompson seems like a nice person and should certainly continue to compete in the sport. So, wouldn’t it solve a multitude of problems to have transgenders swim against each other?
Someone biologically male will (typically) ALWAYS have a physical advantage over a biological female, hormones or no. How is this fair to biological females? In trying to be all inclusive, biological females are being repressed.
There is no prejudice in having races for transgenders as biological males and females also do not compete against one another. This should apply to all sports imo. 😊🤔

You conduct a great interview, Coleman.

We need to have a transgender sports classification – Men’s, Women’s, Transgender’s and mixed

I have zero issues with people living their lives as they see fit. And regardless of how one views themselves- biology is biology. It cannot be undone. No more than genetics leading to cancer, heart defects, or Neurological issues. Please, continue to lead your daily life as a woman if that is what you perceive yourself as, but you must not compete against biological women. You must compete in your biological category… or petition for your own category. Which is what biological women fought for decades ago. Where you have gone wrong in this process is that you believe that battle was for you to take.

Anyone who buys into this evil nonsense is a deluded idiot. This is a MAN, with the pronouns HE and HIM, and this is an insult to every honest woman that competes in sports! This must be stopped!

I do not claim to know or understand the physiological changes or advantages/disadvantage that occur with transgender athletes. We should respect Lia’s decison going forward, but I have some issues and concerns that we do not understand the overall advantages, especially in Lia’s situation where she competed and trained as a man until recently. Simple fix – NCAA athletes can only compete in one sex for their 4-year eligibility.

c’mon SwimSwam cut to the chase. Does Lia think what she s is doing is FAIR?? This has the potential to destroy women’s swimming!

Funny how there’s no concern about trans men taking records in sports. I wonder why that is?