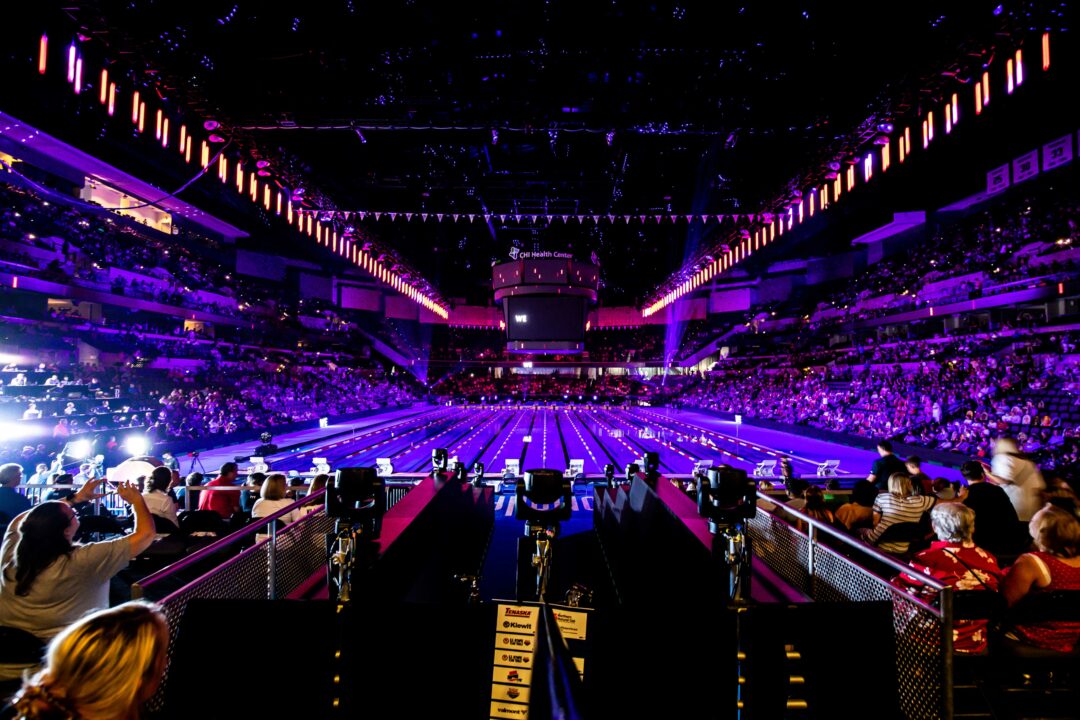 SwimSwam data guru Barry Revzin has provided a different way to evaluate the reduction in the time standards for the 2024 US Olympic Swimming Trials. Stock photo via Jack Spitser/Spitser Photography

USA Swimming last week released time standard for the 2024 US Olympic Swimming Trials, which will be held in Indianapolis, Indiana from June 15-23.

While so far, the organization has not allowed its technical staff to give interviews about specifically how the standards were developed, they did say they used “predictive analytics” to develop an algorithm with a goal of between 80 or 90 qualifiers per event during the qualifying period (not actual swimmers who enter the event, just the number of swimmers who hit the standard in the qualifying period).

Also unsurprising is that the distance events and 400 IMs have the lowest percentage of athletes “cut” from 2021 to 2024 – swimmers who are talented enough to qualify but aren’t going to final in these grueling events will choose other races at some point in their careers if given the option. That means that there is a wider ‘distribution’ of athletes at the lower end of the qualifying range.

The depth of the ‘cuts’ in some races is shocking, and probably needed. While the 50 freestyles, for example, are exciting events, and don’t take that much time, there becomes a diminishing return when sitting through 20 heats of prelims of any race. Even moreso in the men’s 100 breast and men’s 100 back.

Men’s events tended to be cut at a higher rate (by entries, not times or qualifiers) than women’s events: 7 of the top 9 deepest cuts came from men’s events. In total, that’s 157 more men’s entries cut than women’s. That could be in part explained by the fact that women tend to have multiple cuts in more events than men do, so comparing “entries” to “qualifiers (the standard used to develop 2024 cuts)” could hit men harder.

There were also more men’s entries to begin with: 1,309 for men versus 1,193 for women. So the disproportionate cutting of men’s races would be expected to even the field somewhat.

Ultimately, USA Swimming says that the goal is to get to around 1,300 total competitors (not entries) for the 2024 Trials. The new standards represent a cut of entries by about 44% (not competitors)

Back in the day the meet was tiny. We had less than 16 swingers in the boys 4Fr one year.
I’d love to hear how the crowd energy level during finals has changed. I like the proposals for 6 hearts max (60 swimmers)

I understand wanting to reduce the size of the field from the logic that it is unlikely for someone past 50th seed to make the team. However, Olympic Trials is not just about that.

Olympic Trials is also a tool to energize swim clubs which means a great recruitment tool for more athletes to find the sport and become swimmers. It is simple math that by increasing the number of athletes in swimming, you also increase the chance of finding the next Ledecki, Phelps, Dressel, Manuel, et al. Reducing participants limits the 15 or 16 year old who makes it with no chance to make the team but gets the experience so they are ready for the next Trials.

As someone once explained to me: what you get with an Olympic Trials qualifier is free advertising for the sport in every local newspaper in the country. And so the challenge is, how do you balance that against the fact that ‘neutral’ fans (by which I mean non family and friends and coaches) don’t want to sit through 3 hours of prelims for 8 straight days (or 9, depending on whether the new schedule has a prelims session on the last day).

I thought the Wave I/Wave II idea, albeit not for that purpose, sort of hit that sweet spot a little bit.

Aren’t prelims largely family/friends anyway? I took my kids (then age groupers) to 2016 Trials and the only reason we went to one prelim session was because an older kid that used to swim in their club was swimming. Otherwise, we were only there to attend evening finals sessions.

I get that USA swimming might want a smaller meet, but to make the times so strict that 60% of swimmers wouldn’t have qualified seems a little extreme.

Not really. A swimmer who gets a trials cut by .01 won’t make the team. Makes more sense to have the meet be based on the 40 fastest swimmers in each event by a certain deadline. This is the Olympic trials we’re talking about.

I would limit to the 48 fastest swimmers for 6 heats per event.

The name of the meet is “Olympic Trials” and it’s nice to see the meet returning to that purpose. 2021 turned into a participation trophy event for 1000+ swimmers.

This feels right. The actual entties will end up a little higher than the 2024 column shows, because we love a challenge 🙂 but not by so much that we’ll see 90 athletes in any event. Somewhere between 65-80, which feels right.