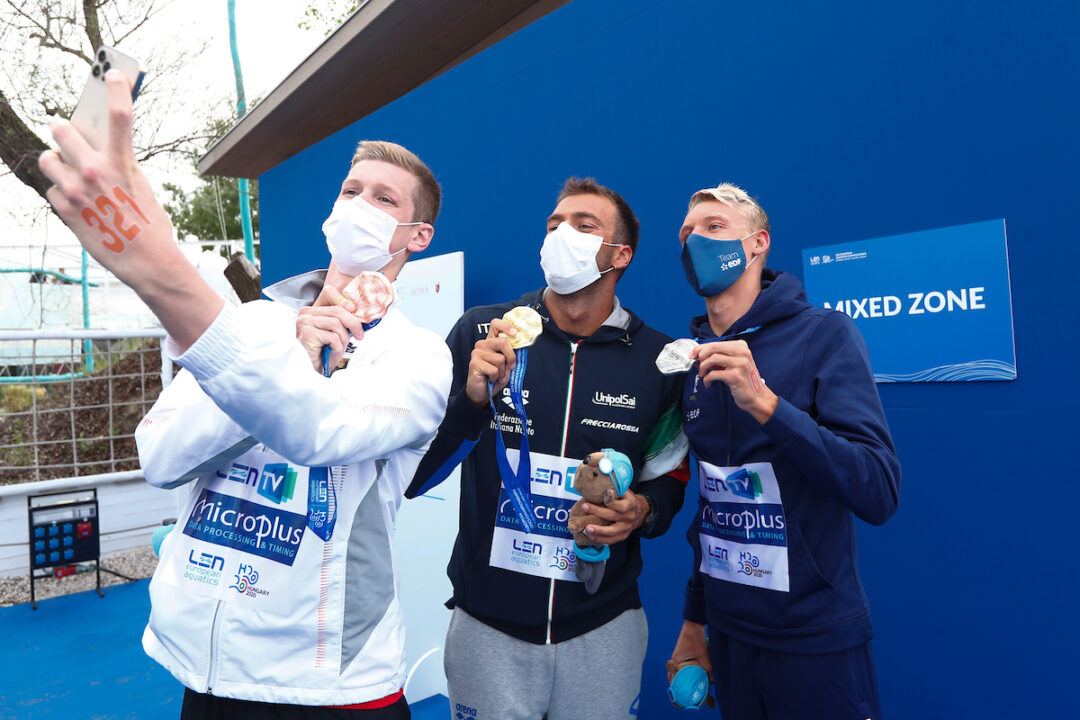 All three men's medalists from the Olympics — Florian Wellbrock, Kristof Rasovszky and Gregorio Paltrinieri —will be racing in Barcelona. Archive photo via © A. Kovacs/Deepbluemedia/Insidefoto

An outstanding field gathers in Barcelona for the third leg of the LEN Open Water Cup as both the men’s and the women’s competitions are to feature the top European finishers from the Olympic Games.

The greatest European stars highlight the Saturday races in Barcelona, to be held in the Moll de Bosc I Alsina – the very centre of the city’s sea front.

Among the men, Olympic champion Florian Wellbrock of Germany, runner-up Kristof Rasovszky of Hungary and bronze medallist Gregorio Paltrinieri of Italy will have another showdown. Add France’s world champion, and winner of the opening leg, Marc-Antoine Olivier, the 25km European champion Axel Reymond and Germany’s 2019 world bronze medallist Rob Muffels to the mix and the second leg of the Cup might be just as well considered a field worthy of a European Championships.

The women’s competition will be no less exciting as Tokyo silver medallist (and Rio Olympic champion) Sharon van Rouwendaal of the Netherlands and 4th placed Anna Olasz of Hungary take on the challenge from the others in the women’s event (they came 1-2 at the Europeans in May).

And the others will surely be very much in the contest as Germany comes with 2019 world bronze medallist Leonie Beck and 25km European champion Lea Boy while Italy lines up with 5km European silver medallist Giulia Gabbrielleschi and the two front runners from the first leg, winner Martina de Memme and runner-up Barbara Pozzobon.

Fans can tune in for free live streaming by clicking here, the start is set at 12.30hrs.