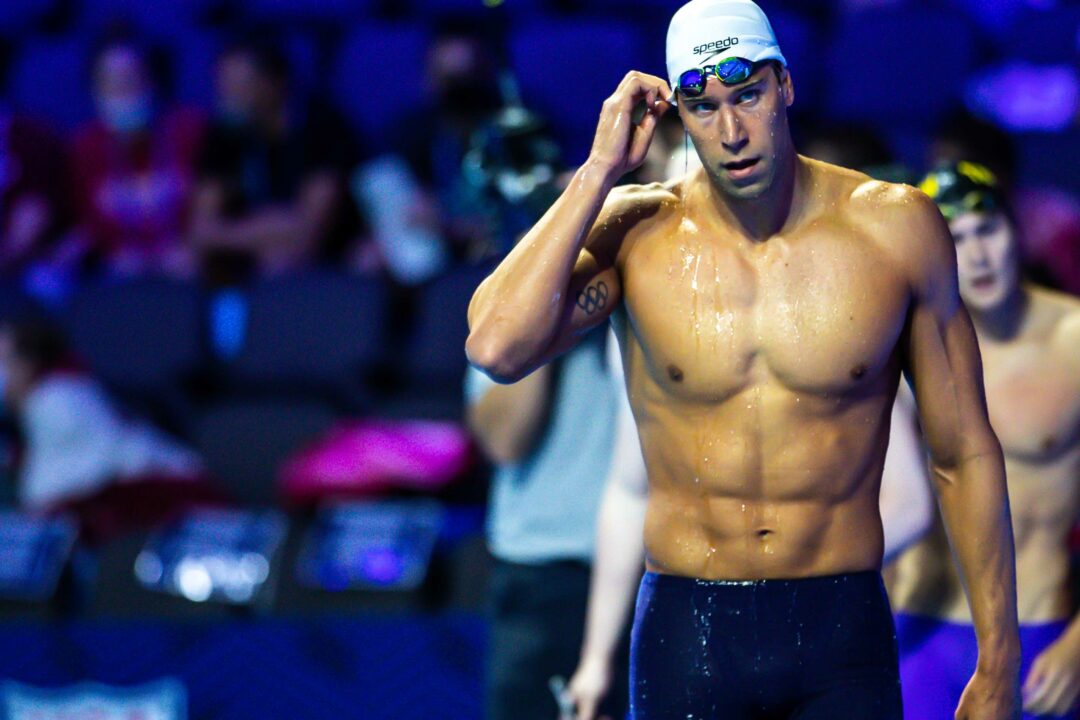 At 6'8, Matt Grevers is tied for the tallest individual male Olympic swimming medalist dating back to 1960. Archive photo via Jack Spitser/Spitser Photography

Take a look at the results of some swimming races at the last Olympic Games, and you probably will have little doubt that swimming is a sport for tall athletes.

According to the World Health Organization, “The expected average height of a healthy population should be 163 cm for women and 176.5 cm for men.” In fact, it would be very difficult to find Olympic medalists below those figures in recent Olympics, which reinforces the motto: Elite level swimmers are above average in terms of height.

In fact, at the Tokyo Olympics, Japanese swimmer Tomoru Honda, the bronze medalist in the men’s 200 fly, was the only male swimmer to win a medal in an individual event being under 1.80 m tall (he is 1.72 m – 5 ft 8 in). On the women’s side, there were only two swimmers who won medals in individual events being under 1.70 m tall: Canadian Maggie MacNeil and American Hali Flickinger.

It seems obvious. Height helps swimmers swim fast. Having a length advantage gives them more surface area to propel themselves forward with. Instagram’s Swimming Stats page has published the list of the tallest Olympic swimming medal winners in men’s individual events since 1960.

Borges was part of the tallest podium ever seen in Olympic swimming history, alongside two swimmers who are also on this list. In the men’s 100 freestyle at the 1992 Olympics, the medalists were Russian Alexander Popov (2.00 m), Borges (2.03 m), and French Stephan Caron (2.00 m). They combined for an average height of 2.01 m.

Since the list comprises only medal winners in individual events, two swimmers who probably are the tallest to win Olympic medals are not on it: German swimmers Bengt and Bjorn Zigarsky, who won bronze medals as members of the German 4×100 freestyle team in 1996. Bengt was 204 cm tall (6 ft 9 in). Bjorn was even taller: 208 cm (6 ft 10 in).

There are conflicting numbers regarding Dutchman Maarten van der Weijden‘s height. He was the Olympic champion of the inaugural marathon swimming 10 km race in 2008. Official data from IOC lists him as 2.02 m tall, but according to some sources he is 2.04 m and even 2.05 m, which would move him to the top of the list.

At the Tokyo Olympics, Frenchman Florent Manaudou was the tallest swimmer to win a medal. Being 1.99 m tall (6 ft 6 in), he won the silver medal in the men’s 50 freestyle.

Trivia: Until the 1990s, the tallest swimmer to win Olympic medals was West German Michael Gross. He was known as “The Albatross” because of his incredible wide arm span that strecthes seven feet – 2.13 m. However, Gustavo Borges has an even larger wingspan: 2.24 m (7 ft 3 in), which is probably the widest arm span ever registered in elite swimming.

Miressi, is 2.02 but he only win relay medal

Balandin 195cm… quite tall for breaststroke. Ari-Pekka also 208cm but not an Olympic medalist.

Could the shortest male Olympic medal winner be Tim McKee ?
Cal had a 6”10 swimmer from Scandinavia around 2020-2011 but not sure if he was a medalist

Mckee is listed as 1,73 still 5cm taller than Prado

Cal’s tallest listed swimmer around that time was Damir Dugonjic from Slovenia (which is not in Scandanavia) at 6’7.

You’re thinking of Rolandis Gimbutis mentioned above (6’10”). From Vilnius, LTU. Did not medal I think.

I never realized (or maybe just forgot) that Agnel was that big. I knew he was tall, but I was thinking closer to 6’5″ish.