Ledecky on Post-Olympics: “I’ll Have to Get All My Stuff for My Dorm” 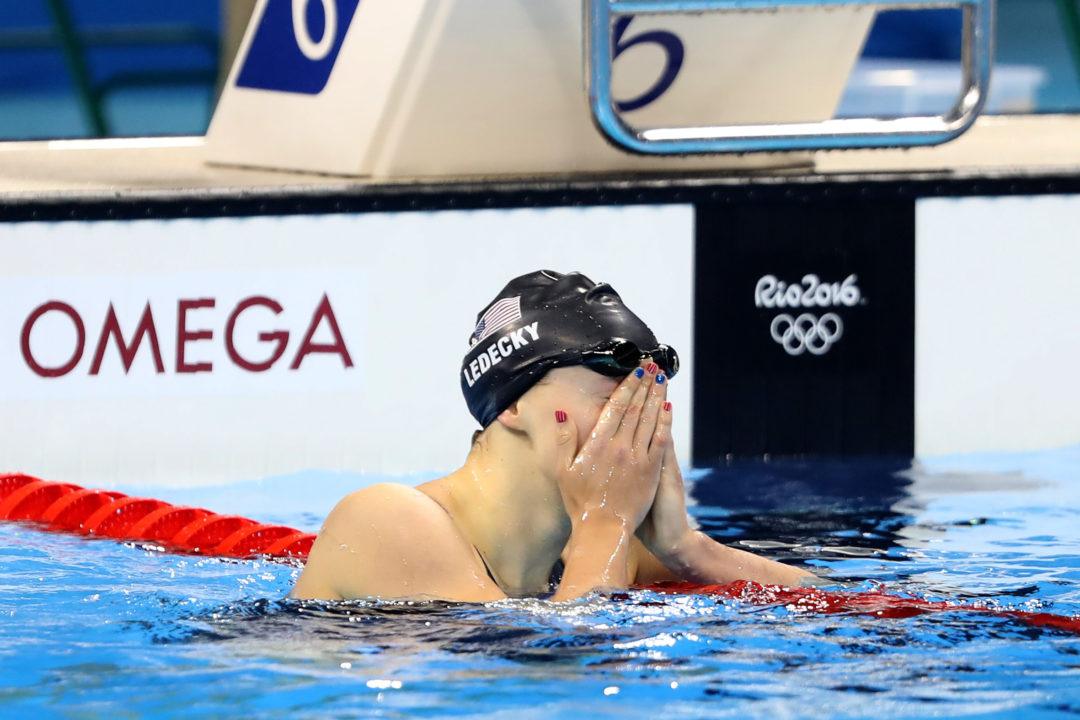 After racking up a total of five Olympic medals this week (four of them gold, and two of them world records), Katie Ledecky will shift into the same gear as young people across the world, transitioning into her freshman year of college. After soaking in the post-Olympic limelight, Ledecky will head off to Stanford University, and new student orientation starts up on September 20th.

“”It’s going to be exciting,” she said of Stanford after her world record-destroying 800 free. “I am heading home in a couple of days and I’ll have to get all my stuff for my dorm and get everything ready. It’ll be tough leaving home but I’m excited for the next chapter.”

While conversation always abounds about the amount of money a young swimmer could make by going pro, Ledecky is embracing what we can call the Missy Franklin route, emphasizing the importance of swimming on a college team.

“I’ve really enjoyed being an amateur, and I think there are some pressures that come with being a professional swimmer, and I don’t think I was ready for that,” she said. “I’m looking forward to having that college experience on the NCAA team at Stanford and I get to be on the team with Simone and Lia, and it’s going to be incredible.”

At Stanford, Ledecky will swim under Greg Meehan, two-time Pac-12 Coach of the Year and the 2014 CSCAA National Swimming Coach of the Year. However, Ledecky says that Bruce Gemmell will always be part of her swimming.

“Greg will be my coach but I know that Bruce will always be heavily involved in my swimming,” she said. “He’s a great friend so I think he will always be a part of my life.”

After yesterday’s race, Gemmell and Ledecky shared an emotional moment.

Go pro and take the money!!!! You never know what can happen in 4 years

Katie isnt the right person to go Pro, she doesnt have that bubbly personality liek Missy did, nothing against Katie, but thats just not who she is, she isnt a very sponsor friendly person becasue shes not all happy go lucky, and theres nothing wrong with that, Katie is very hard working and determined

Enjoy college Katie Ledekcy. One of the most transformative and enjoyable periods of your life. Stanford is lucky to have you.

And to the inevitable “she must go pro and make her millions” people – suggest just giving it a rest. She isn’t doing it. No matter how important it is to…you.

Would love to see you pass up millions in endorsements

Normally in most situations I would applaud this decision. However, in this case I do not. College and being part of a swim team was the second best part of my life and I would say be worth it in most cases. This is not that case. The one thing that has trumped my college swimming time is my family time. To me Katie needs to make sure she looks at this decision as a decision that impacts life 20 years from now and not just the next 4 years. Estimates predict Missy could have made 5-10 million post Olympics. I’m hearing Katie is in the 10-20 million range. That is a different type of money. Not the $500,000-1,000,000 off… Read more »

“there are some pressures that come with being a professional swimmer, and I don’t think I was ready for that,” This is what she said in the above article. This reasoning sounds very mature and thought out. Franklin herself has said she had trouble handling the demands on her time after turning professional. Katie has a dad that is a lawyer and a brother that is a Harvard grad. She went to a top private school and is now getting a Stanford degree. She has already taken online courses through Georgetown. She is more like Maya Dorado than Michael Phelps. Making a decision all about money is very short sighted.

Go. Pro. Now. Attend Stanford, enjoy your academics, learn a lot in the classroom, but don’t let yourself be exploited by NCAA shamateurism.