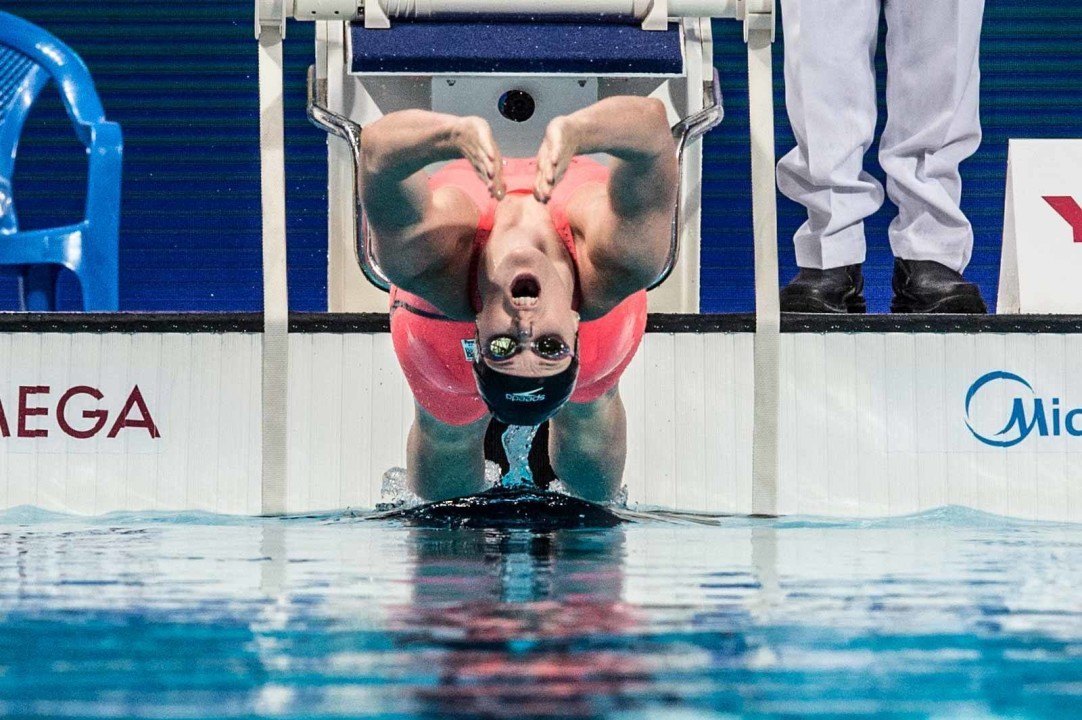 USA Swimming is preparing for the 2015 Golden Goggles Awards and are beginning to release the nominees for the 2015... Archive photo via Mike Lewis/Ola Vista Photography

USA Swimming announced that Haley Anderson, Missy Franklin and Katie Ledecky are the nominees for the 2015 Female Athlete of the Year award. This award is given to the top female swimmer of the year with special emphasis on achievements at the 2015 FINA World Championships.

HALEY ANDERSON – It was a memorable 2015 FINA World Championships for Olympic medalist Haley Anderson, who defended her 5-kilometer world title and qualified for a second U.S. Olympic Team over a four-day span in Kazan. She won Team USA’s first gold medal in Kazan with a time of 58:48.4 in the 5K to defend her first career world title from 2013. Anderson followed that performance with a ninth-place finish in the 10K to qualify for Team USA for next summer’s Olympic Games in Rio. Earlier in the year, Anderson won the national title in the 5K and touched second in the 10K at the USA Swimming Open Water National Championships.

MISSY FRANKLIN – Olympic gold medalist Missy Franklin was one of only three swimmers to win five medals at the 2015 FINA World Championships, as she reached the podium in a pair of individual events and three Team USA relays. On the individual front, Franklin claimed silver in the 200m back in 2:06.34 and bronze in the 200m free in 1:55.49. Alongside her U.S. teammates, she earned gold in the 4x200m free relay and 4x100m mixed free relay and bronze in the 4x100m free relay. Franklin owns 16 career FINA World Championships medals, including a record 11 gold. Earlier in 2015, she closed out her collegiate career with victories at the NCAA Championships in the 200y back, 200y free and 200y IM for the national champion California Golden Bears.

KATIE LEDECKY – Katie Ledecky continued to stake her place among swimming’s all-time greats in 2015 with five gold medals, four of them in individual events, at the FINA World Championships. With victories in the 200m, 400m, 800m and 1500m freestyle events, Ledecky became the first swimmer to win gold in all four events at the same FINA World Championships. She opened her meet in Kazan with a meet record in the 400m free (3:59.13) on Aug. 2 and followed with back-to-back world records in the 1500m free on Aug. 3 and 4. After eclipsing her own world mark in the prelims, Ledecky followed with a world-record time of 15:25.48 and a 15-second victory in the 1500m final. Just one night later, she stepped down to the 200m free distance to take gold in 1:55.16, and wrapped up her meet on Aug. 8 with a third world-record swim in Kazan to take gold in the 800m free in 8:07.39, a 10-second victory. Ledecky also anchored the Team USA women to a come-from-behind gold in the 4x200m free relay. She now has nine career World Championships medals – all gold.

All great swimming by great swimmers, but is this even really any contest? KL wins going away.