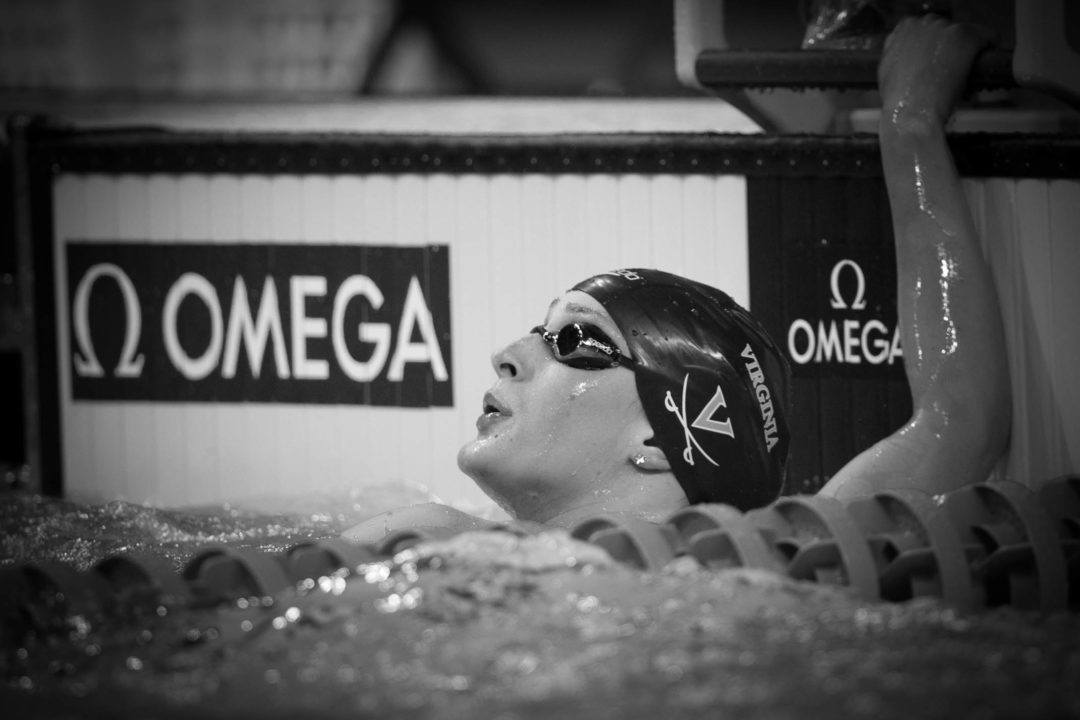 The Virginia Cavaliers broke 5 Pool Records en route to their dual meet victory over Duke on the road, 3 of which were broken at the hands of Leah Smith. Archive photo via Mike Lewis/Ola Vista Photography

The Virginia Cavaliers broke 5 Pool Records en route to their dual meet victory over Duke on the road, 3 of which were broken at the hands of Leah Smith. Her first record came in the 1000 free, which she dominated by 26 seconds to win in 9:34.77. She completed the distance sweep with another Pool Record in the 500 free, posting a 4:43.28. Her final record came in the 400 IM, where she used her freestyle speed to break away from teammate Kaitlyn Jones, setting the mark at 4:14.44. Jones (4:19.66) finished 2nd, also clearing 4:20.

“I am happy for the teams to get the win tonight, but there are many things we need to improve upon,” UVA head coach Augie Busch said. “Our overall focus and attention to good warm-up and warm-down was subpar and needs to be way tomorrow (at North Carolina). Our energy and support for one another needs to improve as well. Tomorrow offers a much stiffer challenge with UNC. After pointing these shortcomings out to the team after tonight, I’m confident we will be improved in those key areas tomorrow. Our men and women can’t wait to race the Tar Heels.”

“We had a solid evening,” UVA head diving coach Jason Glorius said. “We hit some dives we don’t usually hit and got some more new dives off in competition. We just need to keep working hard and do a better job of carrying over our practice performance into meets.”

The Cavaliers return to action Saturday (Jan. 21) at noon.

Despite the dual meet losses, Duke featured several highlights on the night, including a facility record by senior Maddie Rusch in the 50-yard freestyle, two breaststroke wins by senior Peter Kropp and victories in three of the four relay events. The program also received a boost in diving, with Blue Devils earning first-place finishes in all four events.

“It’s Senior Day, it’s their last home meet,” said head coach Dan Colella. “They always seem to find another gear. We knew coming in that Virginia, on paper, they were the better team, and they came out the victors tonight. However, we’re as a staff incredibly proud of how we raced. This is what we wanted to do – we wanted to stand up and really give these guys a battle this evening. I really think they did that.”

The Blue Devil divers kicked off the afternoon with a strong showing on the platform. Freshman Jaina Gaudette (251.78), redshirt senior Jaimee Gundry and sophomore Mackenzie Willborn swept the top three spots on the women’s side, with each surpassing the NCAA Zones standard in the event. Freshman Nathaniel Hernandez was just as impressive for the Duke men, winning the competition with an award of 371.70 – good for the second-highest in program history.

After honoring 18 Blue Devil seniors and friends of the program Max and Mia Elston, Duke kept the momentum rolling in the 200-yard medley relays. The quartet of sophomore Maddie Hess, senior Ashleigh Shanley, freshman Alyssa Marsh and Rusch (1:40.23) raced to a first-place finish ahead of the Cavaliers, as did senior Kaz Takabayashi, Kropp, senior Michael Miller and sophomore Yusuke Legard(1:27.83) on the men’s side.

After Virginia claimed the top spots in the 1,000 and 200 freestyle events, Duke responded with a win in the women’s 100 backstroke. Hess was first to the wall at 54.82 for an NCAA ‘B’ cut while classmate Mickayla Hinkle took third (56.30). Takabayashi (48.73) and sophomore Max St. George (48.94) were second and third, respectively, in the same event for the Blue Devil men. The men’s team then surged past the Cavaliers with a one-two-three performance in the 100 breaststroke, as Kropp (53.54), senior Dylan Payne (54.41) and sophomore Judd Howard (56.35) combined for the sweep.

Duke’s sprint group shined heading into the first intermission, with Rusch breaking a Taishoff record at 22.68 in the women’s 50 freestyle and Legard claiming the men’s 50-yard race (20.60). Legard also took second at the 100-yard distance (45.38), as did junior Leah Goldman (50.57) for the women.

In the final event of the evening, the men’s 200 freestyle relay of Legard, Payne, Seaberg and freshman Miles Williams cruised to a win at 1:20.68.

Bill my friend, you are a savage. Hat off to you

Not that I’m ragging on her. She’s immensely talented snd S great representative for theCavs. But let’s be realistic: by the tine you know has completed her eligibility just before Tokyo she’ll have put the 200-500-1000-1650 records (and who knows? Maybe the 200 fly or 400 IM?) records into the stratosphere where they’re faster than half the guys on the all-time Top 10 list!’

In fact @ Tokyo she’ll be knocking on the door of Paul Biederman’s wrs if they are still standing.

Oh and I’m STIIL picking Dallas to win the Big Dance too.

No , its because of the Trump’s electric election ceremony LOL

You’re right! I forgot Leah was better than ledecky!

At this point Leah should start accepting second place. Ledecky is too good. Well, silver
ain’t so bad if you don’t mind not winning.