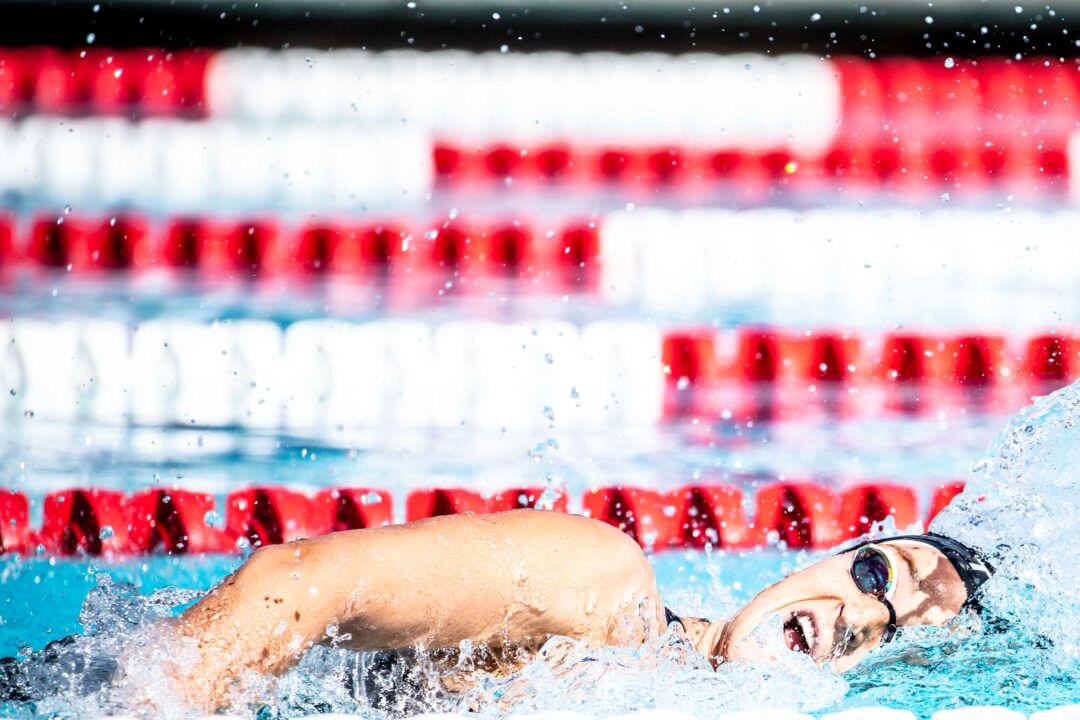 Leah Smith swam to the 3rd fastest time from an American this year in the 400 IM, trailing only Melanie Margalis and Madisyn Cox. Current photo via Jack Spitser/Spitser Photography

Less than a month from the beginning of Wave II Olympic Trials competition in Omaha, Nebraska, Leah Smith and Brooks Fail swam to impressive times in the 400 IM and 200 fly, respectively on the first day of competition at the dual meet. The pair were competing in the Jim Click Team Elite Intrasquad meet held at the University of Arizona.

In the 400 IM, Smith swam to a time of 4:37.39. With that swim, she now sits as the 6th fastest American in the event during the Tokyo 2020 qualifying period. She is now the 8th fastest performer in the world for the event this year, passing Hali Flickinger’s 4:37.55. Only two American’s have been faster than her during 2021, Melanie Margalis at the Pro Swim Series – Mission Viejo and Madisyn Cox at the Longhorn Aquatics Elite Invite.

Smith’s best time in the event came in 2017, when she claimed first in the race at Summer Nationals ahead of Elizabeth Beisel with a time of 4:33.86. She took her race this weekend out much faster, finishing the fly leg well over a second faster than her time from 2017 before quickly fading off that pace during the backstroke.

Joining Smith in jumping up the world rankings was Brooks Fail in the 200 fly. The 21-year old posted a 1:56.18 competing alone in the event. That time marks a drop of nearly a full second from his previous lifetime best of 1:57.00.

Heading into Olympic Trials, Fail now holds the 7th fastest time during the qualifying period, an improvement of three spots from previously. His time moves him past a trio of US National Team members, Caeleb Dressel, Gunnar Bentz, and Chase Kalisz heading into this summer.

Worldwide, Fail now holds the 24th fastest time swum this year. The only American to finish the race faster than him in 2021 is Trenton Julian, who touched in 1:55.77 at the 2021 Atlanta Classic.

Ryan Foote swam to a huge lifetime best in the 100 breast, dropping almost exactly a second and narrowly missing the Wave II cut for Olympic Trials. He will enter Wave I holding one of the top times in the event.

On the second day of the two-day meet, longtime US National Team member and Olympic gold medalist Matt Grevers raced in the 100 back. The 36-year old cruised the first 50 of the race before sprinting the back half, resulting in a final time of 54.97. Despite his race strategy, his time was still below the Wave II Olympic Trials cut.

A Pac-12 A-finalist for the Arizona Wildcats this year, Ty Wells picked up a Wave I Trials cut in the 100 breast on the second day of racing. After narrowly missing the cut in the event on day 1, he took half a second off of his time to touch in 1:03.26, just .03 below the cut.

Good time by Leah. She cannot afford to race it that way at trials though, Weyant and Mchugh will run her down on back and breast legs. They also both have great closing speed so if Leah is a body length behind at 300, it’ll be too much to catch up.

Great time for Brooks Fail, puts him in contention. Who knows how Luca will swim due to his injury, but I’m rooting for him. Julian at 1:55 though and Albiero swimming well also. Men’s 200 fly is very open now.

MP was the tree hiding the forest.
First time since 1996 there will be no MP in the 200 fly. 😥
I don’t know what to expect from Urlando. 2 years ago he was on track to be a medal contender in Tokyo. Julian is in great shape.