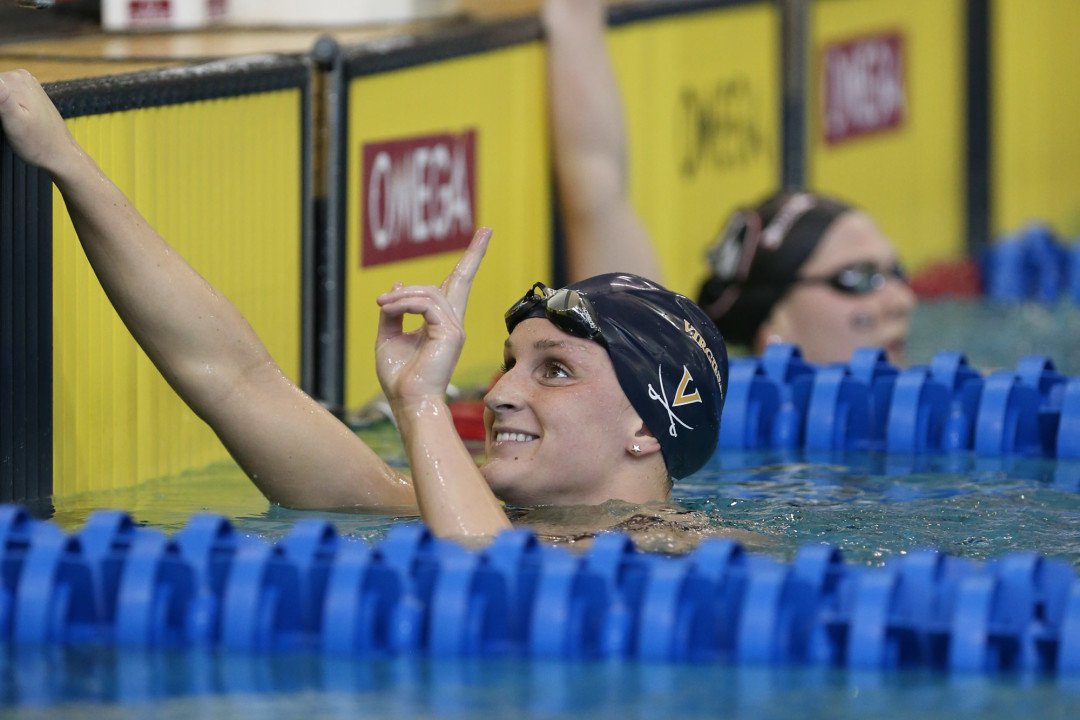 Leah Smith posted a 4:00.65 in the final of the women's 400 free tonight to become the second-fastest textile performer in history. Current photo via Tim Binning/TheSwimPictures.com

Leah Smith of Virginia posted a 4:00.65 tonight in the 400 free to become the second-fastest textile performer in history.

She is now the fourth-fastest women’s 400 freestyle swimmer in history. The all-time top performers are below:

Smith is now the fastest ever non-Ledecky American 400 freestyler, and it’s important to note that both Pellegini and Jackson swam their landmark performances in the 2009 supersuit era.

The Americans now hold the top two swims in the world this year, a full three seconds ahead of the world.

Smith held onto Katie Ledecky‘s tail as the world record holder worked her way to 3:58.98, which just missed the world record. Smith maintained a position about a bodylength and a half behind Ledecky throughout the race.

Although her slot on the team is not official, Smith is very likely on her way to her first Olympic Games.

You can see the full results of the women’s 400 freestyle final here.

How is it criminal?

Leah Smith had the swim of the meet so far, in my opinion. I didn’t expect anyone to be anywhere close to Ledecky.

Times do NOT Matter.
Why is Smith peaking at the trials!
What’s important is the Olympics!
She should be peaking for the Olympics only!
This is useless!

You have no idea whether she’s peaking at Trials. She could easily go even faster in Rio.

This was my favorite race so far at the trials! I’ve been watching Leah Smith since the 2014 summer nationals in Irvine and told myself that she is going to make it to Rio and guess what……she sure as hell did! Love her and love Katie lets go #USA

it drove me crazy that Rowdy kept saying she was now the 4th fastest performer in history.

while everyone else was watching ledecky, i was watching smith swim the 2nd 200 even faster than KL did. yes, check the statistics to back it up. my predictions is ledecies arrogance catches up with her at rio and ciera smith catches her in the race to take the gold medals and the worldrecord.

It’s gonna be tough for Ciera Smith to beat Katie in Rio since she won’t be there.

Interesting the NBAC distance girls are way down . I recall a poster saying in 2012 that they thought it was too mud altitude for a young girl (G Ryan in that case ).

“I saw Katie’s feet!” Quote of the night!