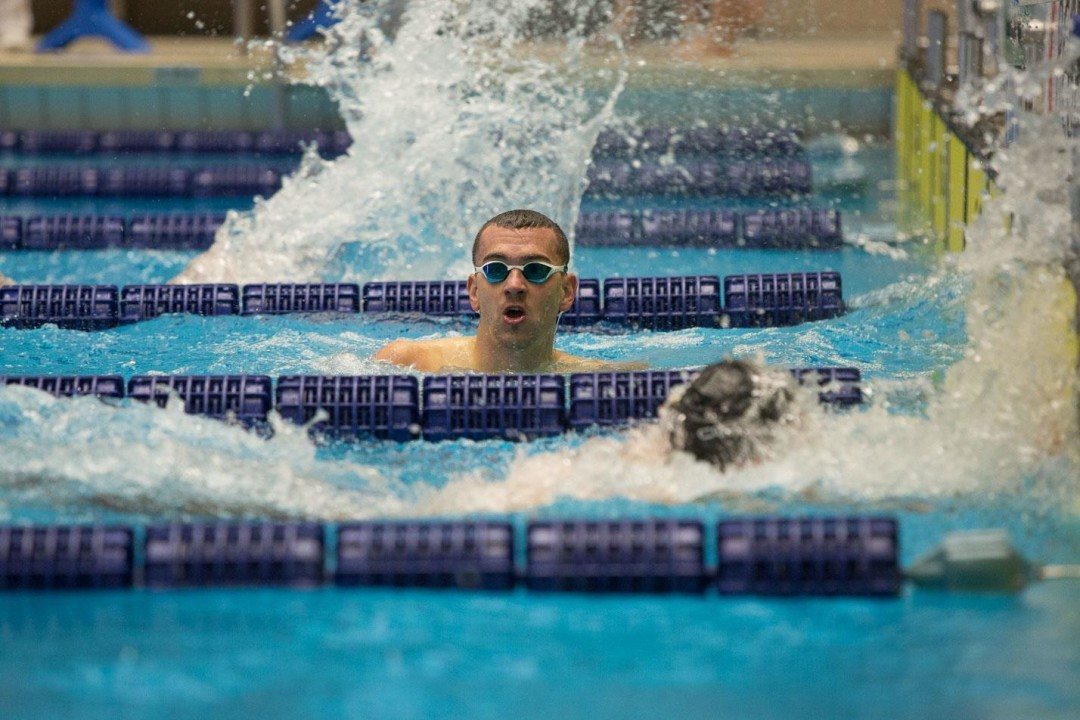 Laszlo Cseh destroyed the meet records in the 200 IM and 50 fly in today's competition at the 2016 Geneva International Challenge. Current photo via Rafael Domeyko/Domeyko Photography

The biggest swims on day two of the Geneva International Challenge came from American Madison Kennedy and Hungarian Laszlo Cseh, who each took down two meet records. Cseh also moved up to seventh in the world rankings in his 200 IM.

Swiss swimmer Maria Ugolkova added another medal to her bronze in the 100 fly, coming in second in 56.02, followed by British swimmer Hannah Burvill.

Slovenia’s Damir Dugonjic, reigning European champion in the short course version of this event, took down the 50 breaststroke record twice in one day. This morning, he grabbed the record with 27.78, and tonight he sped up to clip his prelims mark with 27.71. His swim tonight moves him up to fourteenth in the world rankings, just behind American Kevin Cordes.

After a silver and a bronze yesterday, British swimmer Constance Dean won a narrow victory over Swiss native Lisa Mamié, finishing 2:34.10 to Mamié’s 2:34.19. The duo held together throughout the race, but Dean’s third 50, a 38.88, ended up making the difference.  Alexandra Froissart of Switzerland finished third in 2:38.26.

Yesterday’s 50 back winner Nils Liess of Switzerland scored a massive victory in the 200 back in 2:01.88, seven seconds ahead of the rest of his 19 and over field. However, some swimmers in the 18 and under competition clocked the second and third fastest times. Maxence Orange of France finished in 2:05.18, followed by James McFadzen of Great Britain in 2:07.90.

Kennedy took her second meet record of the day in the 50 back. She swam a 29.27 to come in a quarter of a second under Laura Letrari‘s 29.53 swim from this morning. Letrari herself, an Italian swimmer who won the 200 IM yesterday, finished second in the event in 29.47, also outdoing her morning swim. Switzerland’s Seraina Sturzenegger came in third with 30.85.

Laszlo Cseh of Hungary destroyed the meet record by nearly a second in the 50 fly, clocking 23.60 to move up to seventh in the world rankings for this season. The old record was a 24.59 set by Igor Marchenko back in 2009.

Second place Dominic Polling of Great Britain finished over seven seconds back in 2:07.78, and the third-fastest swim came from fellow Brit James McFadzen in the 18 and under division (2:09.04).