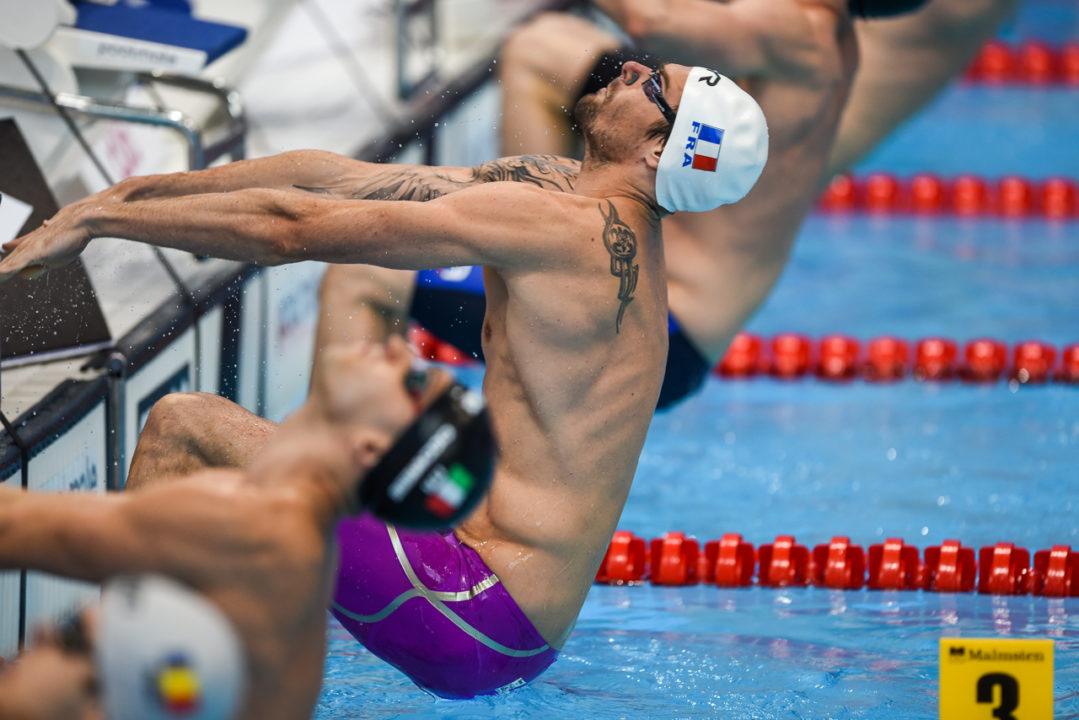 World 100 back co-champions Camille Lacourt and Jérémy Stravius raced stroke-for-stroke into the wall in the 50 back, but Lacourt had the better touch, taking gold in 24.60 ahead of Stravius' 24.73. Current photo via Peter Sukenik/www.petersukenik.com

The 2017 French Elite Long Course Nationals continued this morning in Strasbourg with day 5 finals. Swimmers gathered to compete in the men’s 100 fly and 50 back, while the women competed in the 200 breast, 100 free, and 800 free. Read on for highlights from today’s finals session.

Be sure to check out our recaps in French on SwimSwam Francais. You can find today’s finals recap here.

The French added 2 new swimmers to their World Championships roster tonight in the men’s 50 back. World 100 back co-champions Camille Lacourt and Jérémy Stravius raced stroke-for-stroke into the wall, but Lacourt had the better touch, taking gold in 24.60 ahead of Stravius’ 24.73. Both men were under the qualifying standard of 24.93. They each cracked the top 5 in this year’s world rankings, as Lacourt is now #4 and Stravius #5.

After swimming under the Worlds qualifying mark in prelims, Mehdy Metella was even faster in the men’s 100 fly final. Metella knocked over half a second off his prelims swim, posting a 51.36 to win yet another gold. That was just a tenth shy of his lifetime best (51.24), and makes him the 3rd fastest 100 butterflier in the world this year behind only South Africa’s Chad Le Clos (51.29) and China’s Zhuhao Li (51.34).

Also punching her 2nd ticket to Worlds tonight was Charlotte Bonnet in the women’s 100 free. Bonnet blasted a 53.65 to set a new lifetime best and finish nearly a second under the french qualifying standard of 54.50. That makes her the 9th fastest 100 freestyler in the world this year. Narrowly missing a World Championships berth in this event was Beryl Gastaldello, who finished just .05 shy of the qualifying mark with her 54.55. Gastaldello will still be heading to Budapest after qualifying in the 100 fly yesterday.