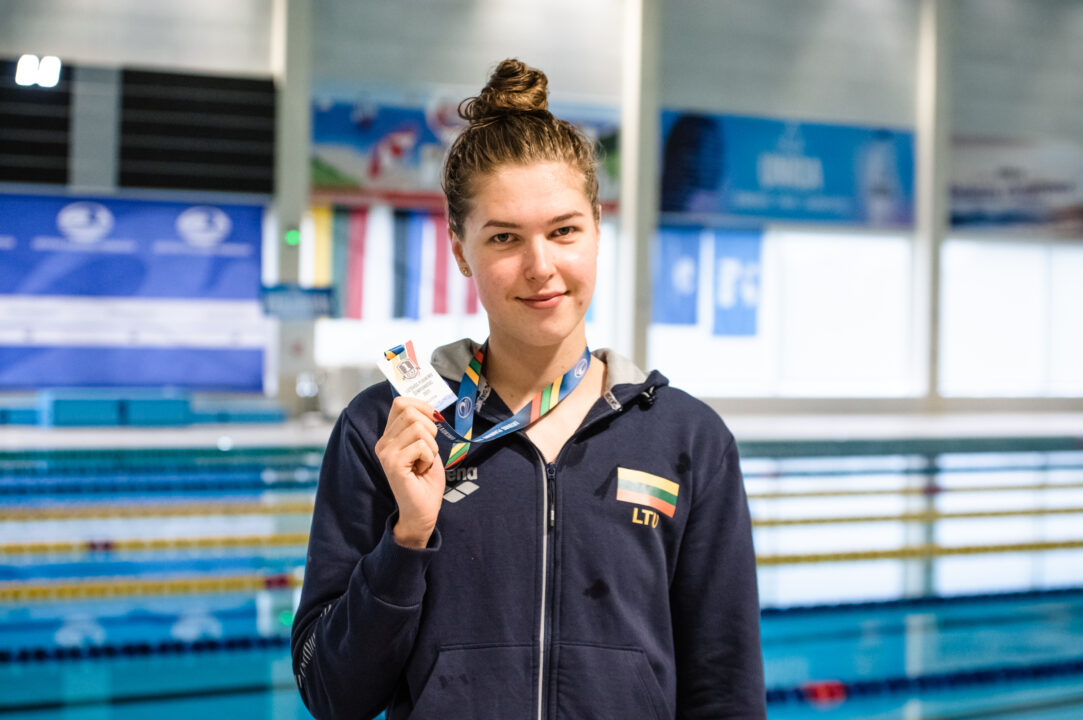 The 19-year-old Teterevkova broke Meilutyte's four-year-old Lithuanian Record in the women's 200 breast in a time of 2:21.81. Archive photo via Linas Krisiukėnas

Ruta Meilutyte‘s grasp on all six Lithuanian female breaststroke records is no more.

19-year-old Kotryna Teterevkova knocked off Meilutyte’s four-year-old mark in the women’s SCM 200 breaststroke during Day 3 prelims at the 2021 European SC Championships in Kazan, registering a time of 2:21.81 to lower Meilutyte’s previous record of 2:22.21, set during the 2017 FINA World Cup.

Teterevkova, who has been steadily on the rise over the last few years, came into the competition with a personal best time of 2:22.66, set during the 2021 ISL season while competing for the LA Current. In Friday morning’s prelims, she was on pace to post a near-identical time before coming home a full second faster on the last 50 in 36.66 to down both her PB and Meilutyte’s old record.

Compared to Meilutyte’s splits, Teterevkova made up all of her ground on the final 50 as well (not a huge surprise given that Meilutyte always specialized in the 50/100 breast).

Teterevkova, who set a best time of 1:04.75 en route to tying for fifth place in the 100 breast final, won the second of four heats in the women’s 200 breast to qualify fourth overall into the semi-finals.

After all of that promise, Teterevkova broke through to qualify for the Lithuanian Olympic team this past summer, finishing 14th in the women’s 100 breast and 23rd in the 200 breast during the Tokyo 2020 Games.